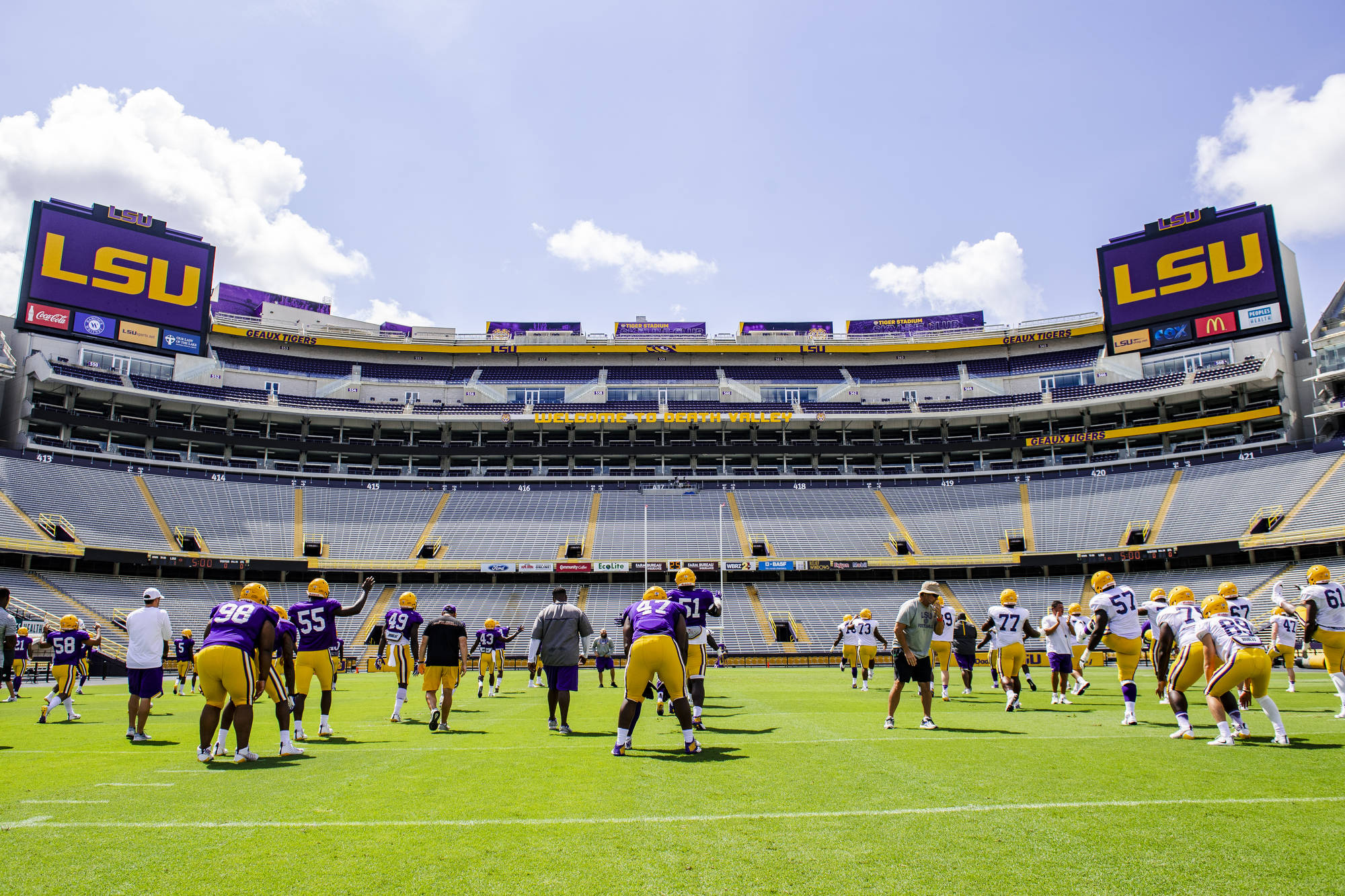 BATON ROUGE – LSU’s defense had another dominant day while the offensive line showed improvement as the Tigers wrapped up training camp with their second preseason game here Saturday in Tiger Stadium.

Now two weeks into practice, LSU turns its attention to the season-opener against eighth-ranked Miami on Sunday, September 2 at AT&T Stadium in Arlington, Texas.

“We’ve had a very successful camp,” LSU coach Ed Orgeron said. “Our guys came in to camp with a great attitude and great mindset. I’m very proud of our football team, our coaching staff and the job that they did in camp. Obviously it’s time to hit somebody else.”

Classes at LSU begin on Monday and the Tigers will start its preparations for the Hurricanes that afternoon with “Tell the Truth Monday”.

“Monday, we’re going to correct some things from the scrimmage and we’re going to move on to Miami,” Oregon said. “Guys are focused. Today is the last day of camp so I know they’re happy about that. I think everybody is going to look forward to game planning against Miami starting Monday. That’s our focus.”

“I thought they threw the ball well,” Orgeron said of Burrow and Brennan. “They made some good decisions in two-minute situations. I thought a lot of passes were on the money but we dropped too many balls.

“I thought they both had a good week of practice. Tuesday and Wednesday was their best practice. They made a lot of connections with our receivers and I thought they really threw the ball well, but we just had some dropped passes.”

“He’s a power runner and he showed us some things today,” Orgeron said of Curry. “He can run the ball between the tackles, but he has enough speed to go outside. I thought he lowered his shoulder pads and he made a lot of plays in between the tackles today.”

Freshman Terrace Marshall led all receives with three catches for 44 yards, including a 25-yard TD reception from Burrow. Tight end Foster Moreau caught a pair of passes for 28 yards and a host of Tigers had one reception.

Orgeron said the offensive line made progress from its performance last week saying, “I thought the protection was a lot better today. We cut down the penalties and gave up fewer sacks. I thought we made some improvement there today.”

“We had a very dominant day again on defense today,” Orgeron said. “Damone Clark had an excellent day and Tyler Shelvin had his best scrimmage as did Michael Divinity.

“I’m most proud of them (Clark and Phillips) and also Patrick Queen. Jacob (Phillips) came in here rated as the number one linebacker in the country a year ago. He battled through some things, fought, and now has become a complete player. I think that he’s ready to have an outstanding year. Damone Clark keeps on showing, like he did today, that he’s a play maker. He’s very smart. So is Patrick Queen.”

Orgeron said the Tigers worked all areas of special teams, except punt returns, which will be a point of focus next week. Graduate senior kicker Cole Tracy was 1-of-2 on field goal attempts, Orgeron said.

“Overall, we had a very good day,” Orgeron said of the special teams performance.

The Tigers will take Sunday off from practice and will look to start getting some players healthy with the season-opener now just two weeks away.

“We need to get healed up,” Orgeron said. “We’re banged up a little bit. Most of the things are just camp injuries and most of the guys I expect to get back for the (Miami) game. I think they need to get their legs back, get back fresh. We did a lot of banging and a lot of hitting. This is a physical camp but all of that stuff is going to heal.”