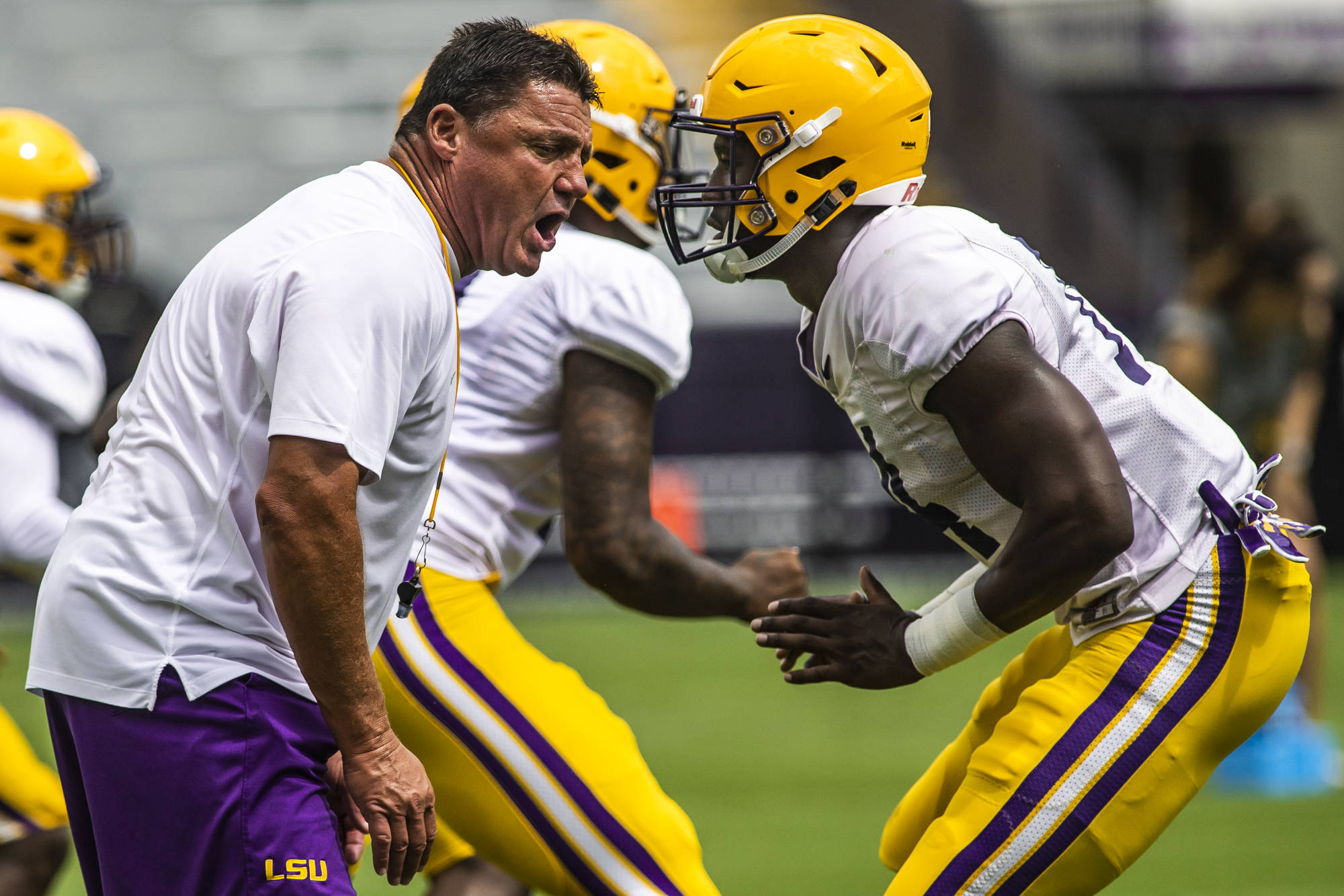 BATON ROUGE – The defense held the upper-hand in LSU’s first preseason game of training camp here Saturday as head coach Ed Orgeron put the Tigers through approximately 100 snaps in a workout that started in Tiger Stadium but was forced indoors due to rain and lightning.

The Tigers got about 30 minutes into the workout when rain and lightning forced the team to the indoor facility where the majority of the scrimmage took place.

Saturday’s scrimmage had the Tigers focusing on third-down situations while also working on several areas of special teams, including field goals and kickoff returns and coverage.

A little mist in Tiger Stadium but the Tigers are still focusing on executing for preseason game No. 1. #GeauxLive pic.twitter.com/Low4xNdhTN

“I was very pleased with the energy and the effort of our football team and the preparation of our coaching staff,” Orgeron said. “We treated it just like it was a game. Our guys were excited about being in Tiger Stadium, but it started raining and it got a little sloppy (due to the rain) so we moved inside and continued to scrimmage.”

Orgeron complimented the play of the defense, which was led by All-America linebacker Devin White, who had six tackles, two tackles for loss, a sack and a pair of quarterback hurries. Other defensive standouts on Saturday included outside linebacker K’Lavon Chaisson (7 tackles, 2 sacks, 1 tackle for loss), linebacker Damone Clark (5 tackles), linebacker Michael Divinity (2 sacks).

“I thought the front seven was dominant today, like I expected them to be,” Orgeron said.

Offensively, all four quarterbacks took reps with the 1s and 2s.

“They rotated a bunch today and we had a lot of different scenarios,” Orgeron said of the quarterbacks. “I think each quarterback started each different period. They all played with the ones and they all played with the twos. It was a rotation. It wasn’t like you could say one guy went with the ones more than another. I think Steve (Ensminger) did a great job of rotating them all the way through.”

Running backs Nick Brossette, Clyde Edwards-Helaire and Chris Curry got most of the carries out of the backfield. Curry led all rushers with 43 yards on 16 carries, while Brossette had 36 yards on 10 carries and Edwards-Helaire 17 yards on nine attempts.

“Nick ran the ball hard today,” Orgeron said. “Nick lowered his pads and ran the ball hard. He ran with the most authority today. Clyde did some good things and we gave Chris Curry some reps.”

“It was the first preseason game and the guys are fired up and trying to do too much. We’ve got to settle down and stay focused.”

On special teams, graduate transfer Cole Tracy was perfect on his three attempts.

The Tigers will take Sunday off and then return to the practice field on Monday. LSU’s second preseason game is scheduled for next Saturday afternoon in Tiger Stadium.