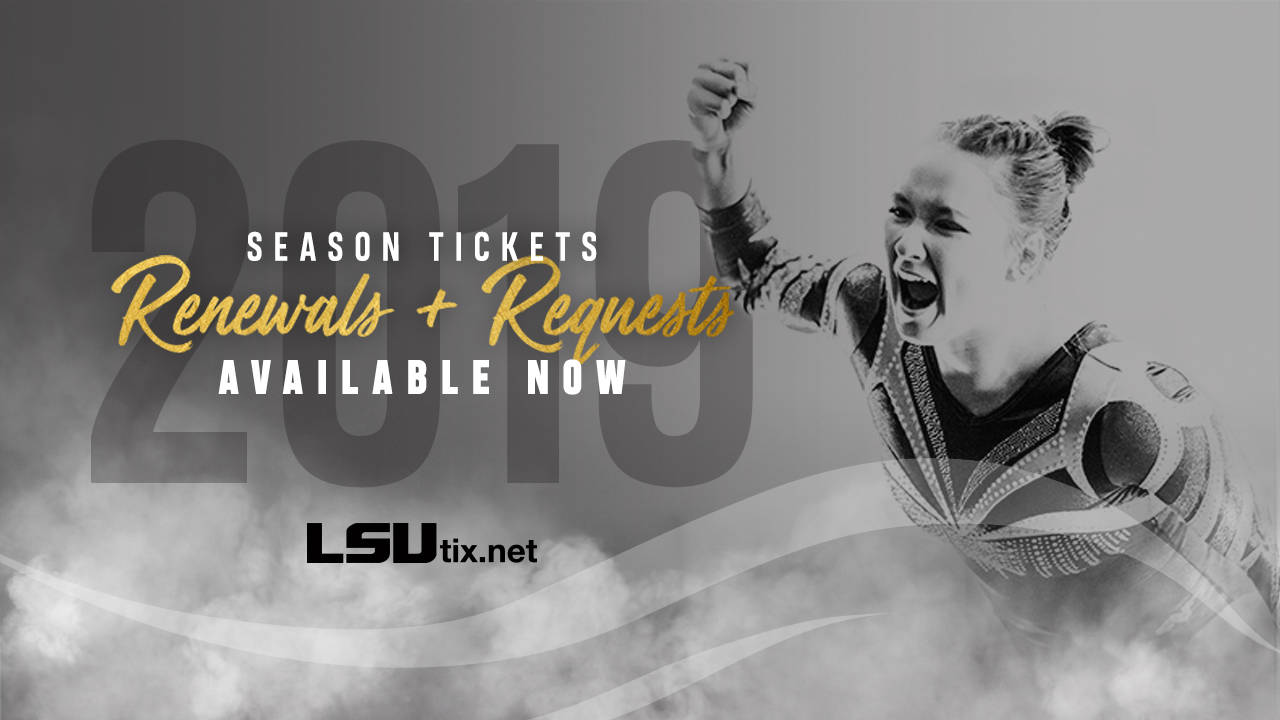 BATON ROUGE – LSU announced Thursday that season ticket renewals for the 2019 gymnastics season are now available with the deadline set for Sunday, Sept. 12.

Current season ticket holders can renew by logging-on to their online account at www.LSUTIX.net or calling the LSU Ticket Office at (225)578-2184 or toll free (800)960-8587 during business hours of 8am to 5pm, Monday through Friday.  Paper invoices will be mailed out in mid-August.

Fans interested in becoming a season ticket holder can sign up for the 2019 season request list at LSUtix.net. Season ticket prices for 2019 remain the same and are listed below:

Interested in Relocating?
Season ticket holders looking to improve their seating can place a relocation request by entering their request in the comments box on the online application or by writing it on the invoice. Additional reserved seats on the south side of the Maravich Center have been added in sections 302-310. All relocation requests and new season ticket requests will be sorted by the April 30 LSU Philanthropic Priority Point Ranking system with assignments beginning in October.

The championship will be held in the state of Louisiana for the first time since 1998. The Greater New Orleans Sports Foundation and the SEC will host the meet on March 23 in the Smoothie King Center.

One of the Best Home-Arena Advantages in College Gymnastics

The Maravich Center has provided one of the top home-arena advantages in the country over the last six seasons with a perfect 34-0 record during that span. The program set a season ticket holder record in 2018 with more than 5,000 sold.

In the last six seasons, LSU has set new average attendance records. In 2018, the program averaged 12,009 fans per meet to rank first in the Southeastern Conference and second in the nation for the first time in program history. Five of the six meets in the PMAC ranked in the top-10 of the best gymnastics attendance figures in school history.

LSU sold out back-to-back meets in the PMAC for the first time in school history against Alabama and Kentucky. Tiger fans set the single meet record against the Crimson Tide when 13,729 fans packed the PMAC. Against the Wildcats, LSU once again eclipsed the 13,000 mark with 13,185 fans inside the Maravich Center for the third-largest crowd in school history.