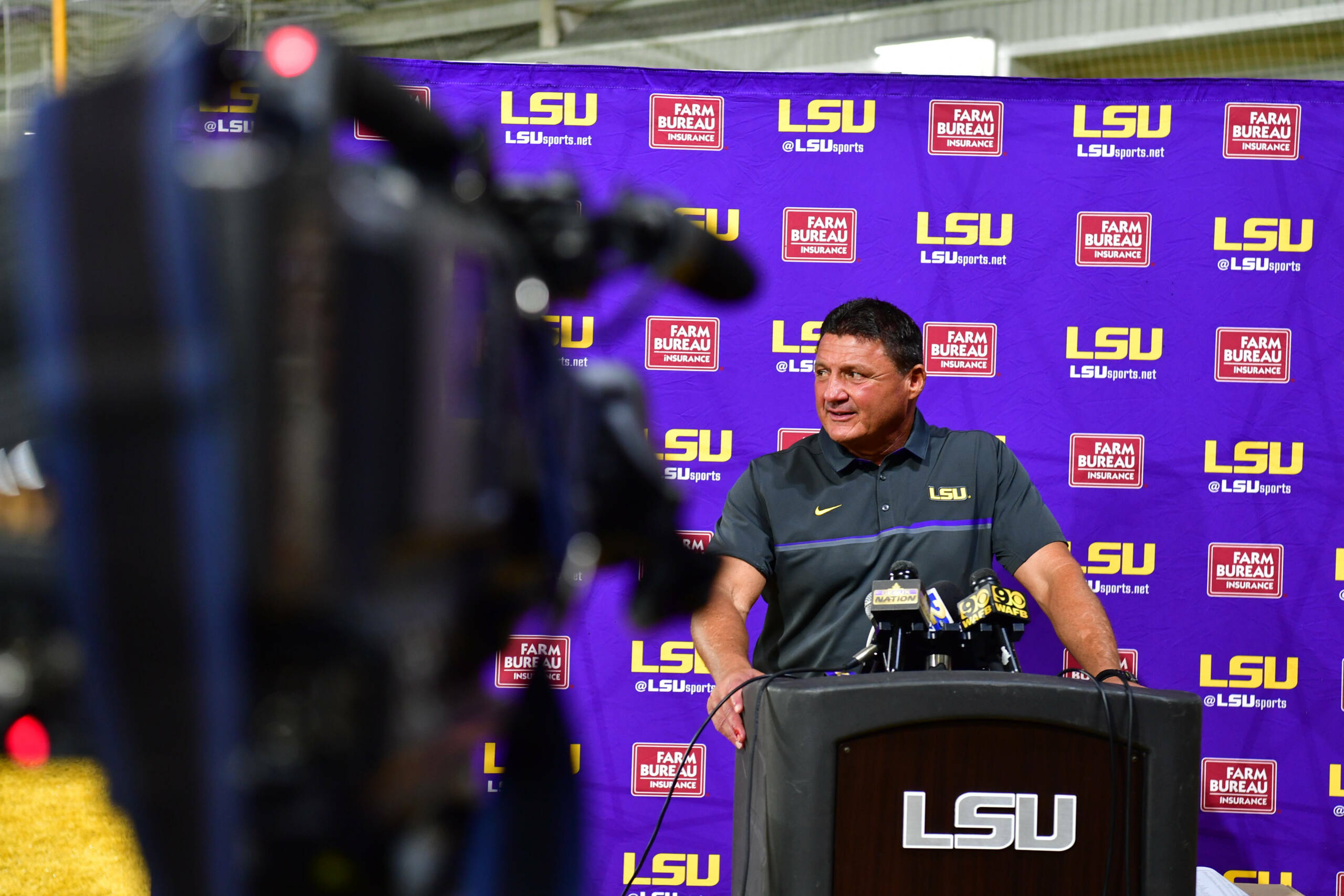 BATON ROUGE – LSU got its first day of training camp off to a quick start as the Tigers went through a fast-paced, high-energy workout here Saturday at the Charles McClendon Practice Facility.

Saturday’s session was the first of what will be two days of shorts and helmet workouts for the Tigers. LSU will add shoulder pads on Monday, followed by “shells” on Tuesday and will then hold its first full pads practice on Wednesday.

Tiger Jacks from our view🎥
Fall Camp Practice #1 is in the books✅ pic.twitter.com/zhPyQQWWOn

Let’s throw it around… pic.twitter.com/Z7u0zIYNe8

Check out what’s in the bag… pic.twitter.com/e1OYDOMWFm

.@Thaddeusmoss and Jimmy Taylor representing #LSU in Canton this weekend with the newest member of the @ProFootballHOF! pic.twitter.com/8rsamh1lGs

Opening Statement…
“We had a good first day. Some guys that stood out today were (placekicker) Cole Tracy who was five-of-five for field goals, longest of 42 yards. Avery Atkins, a walk-on from Auburn, Alabama, had a great day of kicking the football off. He had a lot of touchbacks so we’re really proud to see our kicking game improve. Obviously, they will have to do it in a game, but a great start today. Coach (Greg McMahon) told me that Cole Tracy made every one of his field goals (during the entire practice). That’s good news.

“On defense we had some guys show out today. I thought K’Lavon Chaisson had a great practice. He really stood out along with Devin White. A guy that’s really coming along is Damone Clark, a young linebacker from Southern Lab. He’s pushing and so is Jacob Phillips. At the other corner, I though Kary Vincent had a solid day today. Those guys are really competing for a starting spot. K’Lavon Chaisson was hard to block coming off the edge.

“On offense, I thought all the quarterbacks did some good things. I thought that Joe (Burrow) did some good things. Joe practiced with the fourth team today. He was the fourth quarterback to go in. His reps are going to come with the first and second teams as we grow. I thought Steve (Ensminger) did a tremendous job. We had a two spot drill on seven-on-sevens so we got a lot of reps to evaluate. A guy that keeps on coming up is Jamaar Chase, out of Rummel High School. His name keeps coming up. He ended the team period today on a long pass for a touchdown. Jerry (Sullivan) is really pleased with him and the young receivers. Damien (Lewis) looked good on the offensive line. We’re going to have to get a little bit better there on our protection. The defense had some good rushes today, but overall I thought it was a good day. We’re looking forward to going out again tomorrow and taking the next step. Hopefully it’s a little bit hot out so we can test our guys mentally.

On what he saw out of the quarterbacks…
“Joe (Burrow) looked good, but he’s practicing with the fourth team. He made some good decisions. Justin (McMillan) played really good. He made some plays with his feet. I thought Lowell (Narcisse) threw the ball better today. I thought Myles Brennan probably had his best day since we’ve been having this competition. All of them did some good things. Joe looked steady out there. I was very pleased to watch him. It’s the first time I’ve seen him. Another guy I’ll mention is (running back) Chris Curry. Chris had some long runs. He was very impressive today. So was Nick Brossette. I thought Nick did an excellent job of running the zone game.”

On how defensive lineman Tyler Shelvin looked…
“He’s 350 (pounds). He’s better. He’s in shape. He’s healthy. He can really contribute for us. He’s a very talented guy. We’ve got some work to do. He’s got to get better, but he can be a dominant force. A guy that really showed out today was Dominic Livingston. Dominic is still 380 pounds. He ran well. He made some plays up and down the line of scrimmage. I was really pleased with his play today.”

On Joe Burrow‘s strong voice and cadence…
“He’s really confident. He’s a leader out there. When he steps in there, he’s cool and calm and he’s smart. When we give the guys time off, he’s in there watching film on his own. He’s really student of the game. He’s mature. He’s ready to go. He’s competing.”

On who each quarterback got reps with at today’s practice…
“Today, it was Justin (McMillan’s) turn to start. Myles (Brennan) was with the twos. Lowell Narcisse was with the threes and Joe (Burrow) was four. Steve (Ensminger) will switch it around tomorrow and everybody will get their turn with the ones.”

On what stands out about Ja’Marr Chase…
“Ja’Marr is physical. He has big hands. He has 10 ½ inch hands. He can catch the ball well. He’s very strong, fast, runs great routes. Very mature. He just has a natural knack for catching that football.”

On Breiden Fehoko…
“I’ll tell you another guy that was in better shape today and looked better was Breiden Fehoko. He had a good spring. He could have gone 50 more plays today. Very pleased to see the condition of Breiden Fehoko.”

On Glen Logan…
“He looked good. Really good. He’s in good shape. Had a solid practice.”

On Racey McMath and Michael Divinity Jr. …
“Mike was hustling. He had a good day today. He was coming off the edge. Excellent in pass rush. Mike’s mature and trying to be a leader. Racey had a solid day.”

On what stands out about Kary Vincent Jr. …
“His speed. Speedy. He came off the edge one time and blocked the field goal on the rushes. Good coverage, break on the ball. He came up and made a couple of good tackles showing some physicality. Making calls out there. Communicating is one thing that Dave challenged the defense on last night.”

On wide receiver group…
“I thought Kenan Jones showed some things out there today. Very athletic. I need to watch the tape tonight, but I think that all the receivers did a good job. Jerry was fired up.”

On Damien Lewis….
“No question, he was dominant out there today. It was kind of tough of the situation. I do not think that anybody was happy because of the change. They were sad because of their teammate (Ed Ingram). It was a tough day for those guys yesterday. Garret Brumfield and Damien Lewis showed leadership. Obviously, that is not the way that he wanted to end up at right guard. But he answered it the right way and he answered the bell. I think that moving Chasen Hines to guard was a good move and he is going to need some work. A young tackle that I forgot to mention was Cameron Wire. Cameron was not going to practice but he told Jack (Marucci) that he was ready to go so we tried him a little bit and he looked very athletic and he showed out a little bit today.”

On Dare Rosenthal…
“He has to get ready and learn his techniques and get his pad level down. I saw him and Dominic Livingston today, they really stood out as young defensive linemen.”

On Andre Anthony…
“He looks good. He is in good shape. He was a little gimpy on that foot but he is ready to go now. He is competing and he is right behind K’Lavon (Chaisson). It’s he and Travez Moore competing for the second spot. They know that they are going to get reps. But he (Andre Anthony) had a good day today.”

On the offensive line and Garrett Brumfield…
“Well he (Garrett Brumfield) had some snaps at center this summer. And we have to see who is the best available (for the center position). You also have Austin Deculus and Adrian Magee playing tackle. If Lloyd Cushenberry III is not the best choice and we decide to move Brumfield inside, then we will move Deculus or (Adrian) Magee to guard and that could happen. We are going to see when the pads come on how Cushenberry holds up inside.”