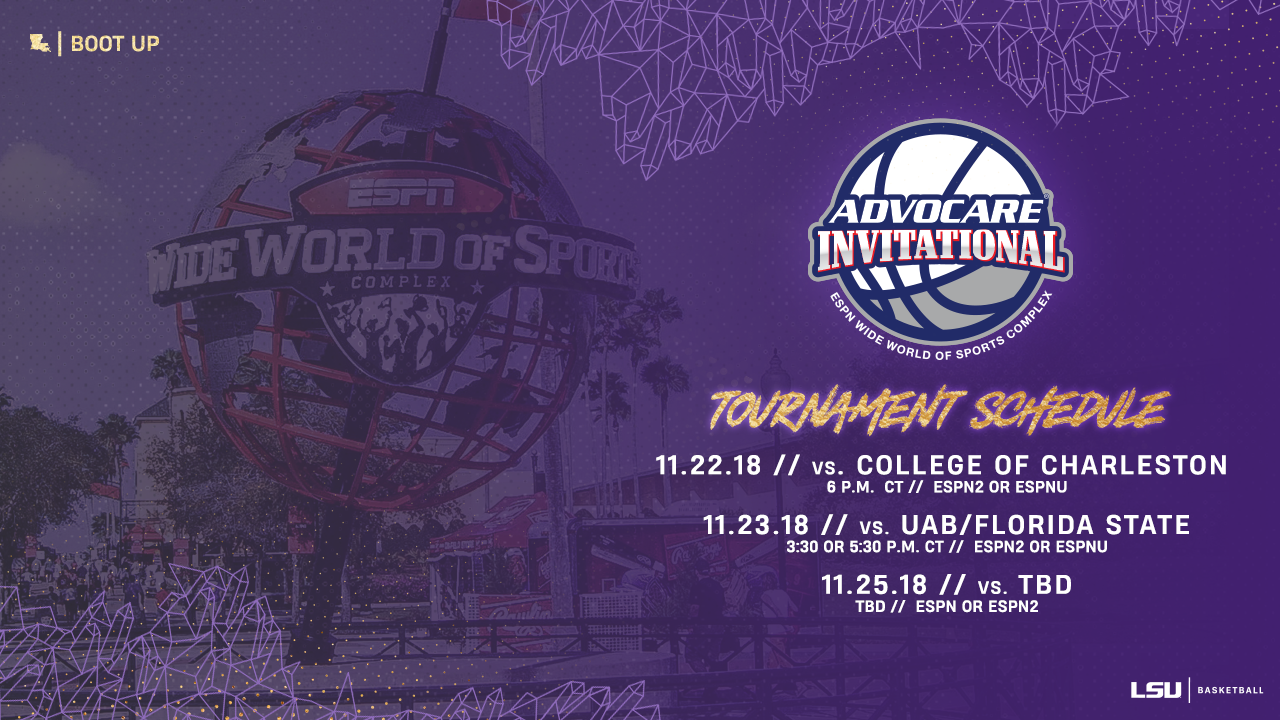 BATON ROUGE – ESPN Events announced the pairings and the bracket for the 2018 AdvoCare Invitational that LSU will be participating in Thanksgiving Weekend in Lake Buena Vista, Florida at the ESPN Wide World of Sports facility.

The Tigers will open with Charleston in the third game of the opening day Thanksgiving (Nov. 22) of the eight-team event in a contest that will tip at 6 p.m. CT and will be televised on either ESPN2 or ESPNU. Like all LSU Basketball games, the AdvoCare Invitational will be broadcast on the affiliates of the LSU Sports Radio Network.

Charleston posted a 26-8 record a season ago and lost in the first round of the NCAA Tournament to Auburn, 62-58. The Tigers and Cougars have played on three occasions recently with LSU holding a 2-1 advantage. LSU won in 2014 and 2016 in Baton Rouge, losing in 2015 in Charleston.

The Tigers will then face either UAB or Florida State on Friday, Nov. 23. Nov. 24 is an off day and the tournament will conclude on Sunday, Nov. 25.

The Tigers and UAB have played four times in the past with LSU having won three games. LSU swept a home and home with the Blazers in 2013 and 2014. LSU and Florida State have played five times with LSU posting three wins. The teams last played in New Orleans in 2004 with LSU a 67-50 winner at the now-Smoothie King Center.

UAB won 20 games a year ago and Florida State won 23 games and advanced to the NCAA Elite 8 before losing to Michigan.

The other side of the bracket has defending national champion, Villanova, facing Canisius and Oklahoma State playing Memphis.

LSU and Memphis are already scheduled to play in Baton Rouge on Nov. 13 as one of the events non-bracketed games and an already planned second meeting between the schools in a home-and-home series that started a year ago.

The Tigers are playing in this event for the second time, having posted a 2-1 record in 2013. LSU defeated Saint Joseph’s in the opening round before falling to Memphis on the second day. The Tigers closed out the event with a 70-68 overtime win over Butler. Tickets go on sale to the general public at Walt Disney World on Monday, July 16.

The Tigers are continuing summer workouts under the direction of second-year men’s basketball coach Will Wade. The opening game of the 2018-19 season is against Southeastern Louisiana on Nov. 6. The SEC schedule is expected to be announced in August. Season ticket information can be found at LSUtix.net.