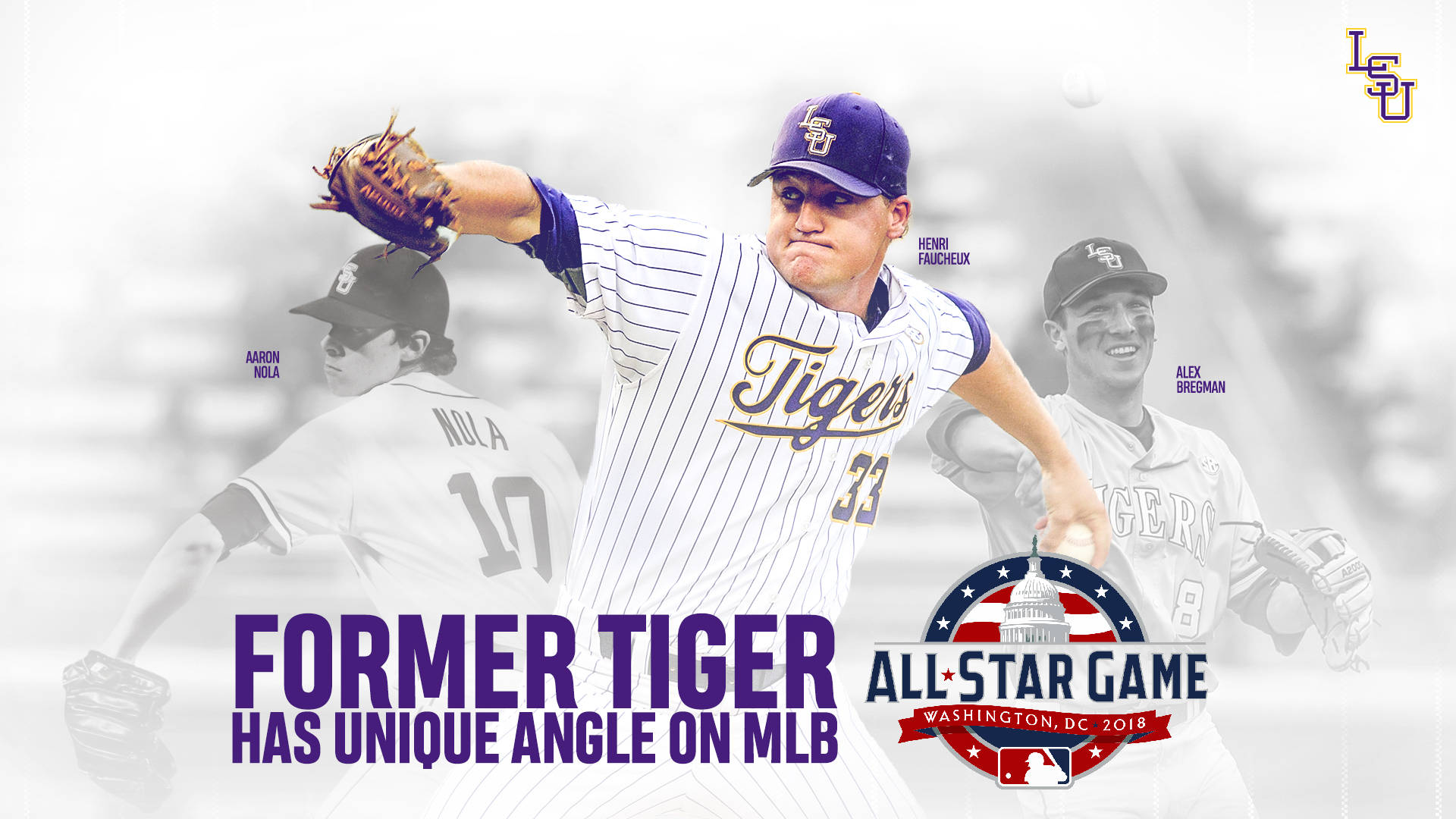 Pulitzer Prize winner Jeffrey Marx is the author of “Walking with Tigers: A Collection of LSU Sports Stories” and five other books. You can follow him on Twitter: @LSUTigersBook

Henri Faucheux will not be in Washington, D.C., for next week’s Major League Baseball All-Star Game. He’ll only be watching on TV – relaxing at his home in the small Louisiana town of Maurepas.

But Faucheux – full name pronounced on-REE FOH-shay – will nonetheless have a unique angle on the big game. Nobody else spent a year of college living with Aaron Nola and Alex Bregman, the former LSU All-Americans about to appear in the first MLB All-Star Game for both of them.

Nola, Bregman, and Faucheux shared an off-campus condo and played together on the 2014 LSU baseball team. Nola, then a junior, was the reigning SEC pitcher of the year. Bregman, a sophomore, was back after winning the Brooks Wallace Award as national shortstop of the year. Faucheux was new to LSU: a left-handed pitcher who had played his first two years of college ball at other schools – most recently at an Alabama community college.

“Both great guys, both great roommates,” Faucheux now says of Nola and Bregman. “They were different. With Aaron, I just think of his simplicity, his calmness. He was always so nonchalant about everything. With Bregman, first thing I think of, well, let’s just say there’s no doubt in my mind that his room is still messy.

“But we always had a good time. And one thing I always knew about both of them – baseball was definitely going to be their ticket. That was the big similarity with them. They had one focus: just baseball. I couldn’t picture either one of them doing anything else.”

Actually, there were other things Faucheux would forever picture Nola and Bregman doing. But they were just everyday roommate things – shared memories such as fishing and singing and fussing about the setting on the thermostat.

I wrote about those things in a chapter on Bregman in my Walking with Tigers book.

After addressing Bregman’s “cleanliness issues” and general cluelessness about living on his own – Faucheux had to teach him how to use the dishwasher – here is some of what I wrote about the roommates:

Nola and Faucheux would have other minor roommate-issues with Bregman. He’d play his rap music too loud. He’d mess with the thermostat and then fail to put it back the way it was, transforming the place into an icebox. He’d leave without turning off lights. One time, Bregman cooked eggs at about 1:00 in the morning, and a while later, Nola realized that he hadn’t bothered to turn off the stove. “What are you doing?” Nola exclaimed. “You’re going to burn the house down!”

Mostly, though, Bregman and his roommates had a good time together. They’d watch movies. They’d go out in a small boat on the pond behind their condo. They’d select targets out by the water and shoot at them with a pellet gun. They’d compete in card games and on PlayStation. Faucheux would play his guitar – mostly country music – and Bregman would sing as best he could. (As Faucheux puts it: “He’s no George Strait. He’s no Tim McGraw.” But they always laughed and enjoyed themselves.)

The 2014 season did not finish the way any of the roommates wanted it to end: the University of Houston eliminating the Tigers in the NCAA Tournament regional played at Alex Box Stadium.

Knowing that his LSU career was done, Nola took his time before leaving the locker room, one of the last players to exit. He went to the designated area, under the stands on the first-base side of the stadium, where fans always wait to collect autographs and take pictures.

Bregman was the last player to make it outside – trailing just behind Nola. It was right at midnight when Bregman finally arrived. But close to a hundred people were still there to greet him. Bregman signed and posed and even managed to smile as he patiently worked the crowd for almost half an hour.

Once all the fans had their autographs and photos, Bregman walked with teammate Nate Fury to the parking lot on the other side of the stadium. Then he broke off, alone, toward his pickup truck.

Nola and his parents, A.J. and Stacie, were still lingering in the lot. Bregman told the Nolas he’d be looking for them when he watched the draft, meaning the MLB draft later that week. “I expect to see you fully Hollywooded out on TV!” Bregman said. Then he said goodnight and got into his truck.

It was not only the end of a season. It was also the end of condo life as Faucheux, Nola, and Bregman had come to know it.

The Philadelphia Phillies selected Nola in the first round of the draft – and off he went to pro ball. Bregman would play one more year at LSU before being drafted by the Houston Astros (the second overall pick in the 2015 draft). Faucheux would never again play organized baseball. After pitching only 21 1/3 innings for LSU during the 2014 season – mostly as a reliever – he was cut from the team the following fall.

In December 2015, Faucheux graduated from LSU with a major in sport administration and a minor in business administration. He now works as an operator at the Mosaic ammonia plant in Donaldsonville.

Faucheux and Nola were friends long before living together, and they have always stayed in close contact. Faucheux flew to Philadelphia for Nola’s MLB debut in 2015, and they couldn’t count the number of times they’ve gone fishing together during Nola’s baseball off-seasons.

“Aaron is more like a brother than a friend,” Faucheux says.

His contact with Bregman has been more limited. But Faucheux has always kept up with Bregman’s progress. He was especially locked in last year as Bregman played a central role in the World Series and his Astros ended up champions.

As far as individual performances, this season has been the best yet for both Bregman and Nola. Bregman has been raking at the plate – with 17 home runs and 57 RBIs so far – and routinely flashing web gems as a third baseman. Nola has been throwing fire as Philadelphia’s ace. After pitching seven shutout innings and getting a win over the New York Mets last night, he now has a 12-2 record and a 2.27 ERA.

All of which sets the scene for a week from tonight on a back porch in little Maurepas, Louisiana. That’s where Faucheux will settle down to watch his old roommates perform in the All-Star Game being played at Nationals Park in D.C.

“I’ll just be sitting on my porch,” Faucheux says. “I have a big projector TV set up out there, overlooking the water. I have a canal behind the house. So that’s where I’ll be. I’ll just drink a couple beverages and enjoy the game.”

There is one possible scenario – although unlikely to happen – that could bring a bit of stress into Faucheux’s evening. With Nola being a National League pitcher and Bregman playing for the American League, they could end up facing each other: one former roommate on the mound, one in the batter’s box.

Which one of his guys would win that battle?

He pauses to ponder what it would be like to watch that – kind of hoping it doesn’t happen.

“I wouldn’t root one way or the other,” Faucheux finally says. “I just want the best for both of them.”