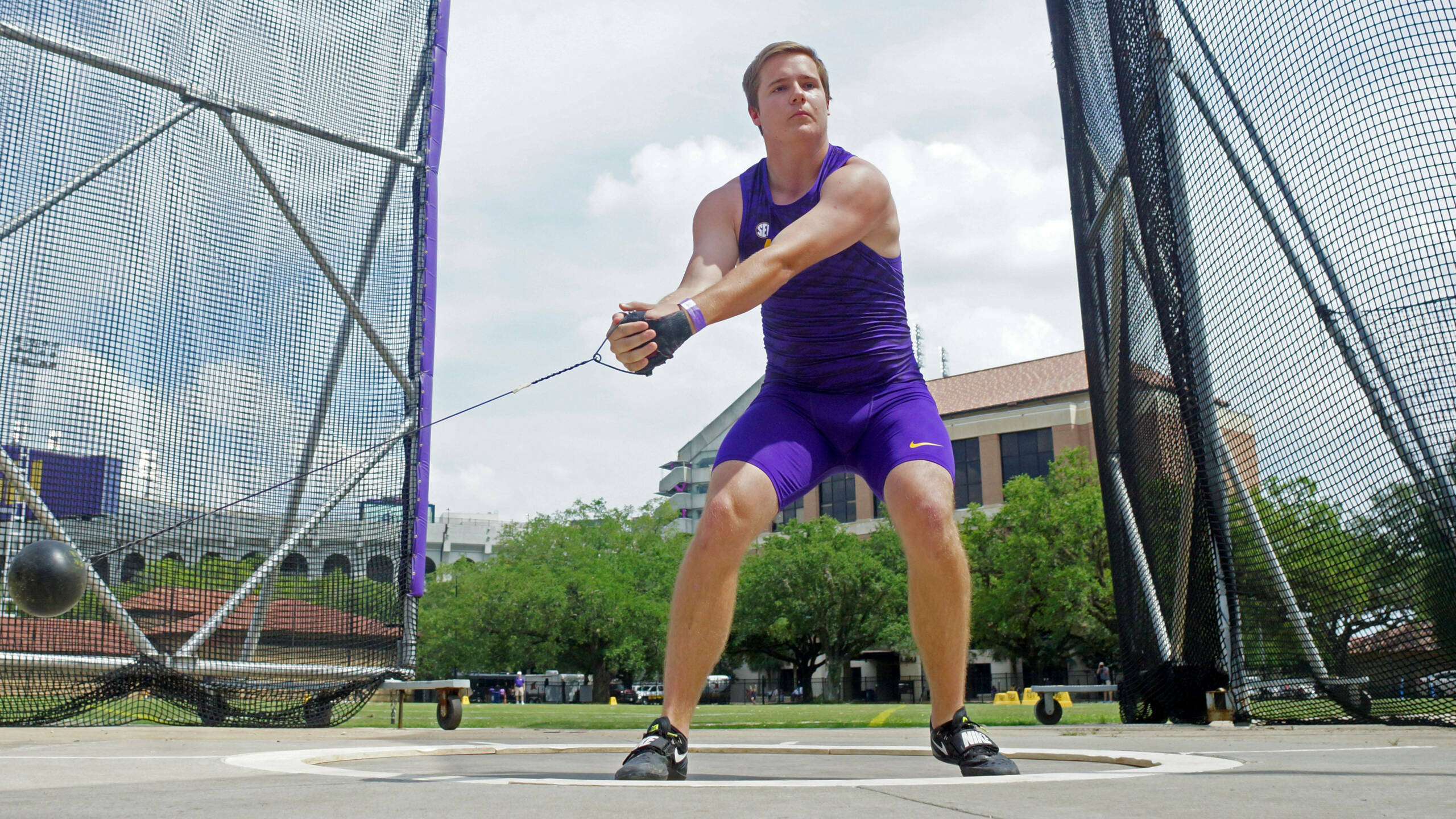 Baton Rouge, La. – The LSU track and field team has seven representatives (four current and three incoming) competing at the 2018 IAAF World U20 Championships this week in Tampere, Finland. Fans can follow this page all week long for the most up to date information of the world junior meet.

Mondo Duplantis cleared 5.82 meters (19-1.00) to claim gold while setting a championship record on Saturday morning at Ratina Stadium in Finland at the 2018 IAAF U20 World Championships.

The clear favorite in the event, Duplantis brought home the gold medal for Sweden with ease. The clearance of 5.82 meters broke German Chiaraviglio’s meet record that he set back in 2006 while representing Argentina. Already the world junior record holder with a clearance of 5.93 meters (19-5.50) at the Louisiana State Championships in May, Duplantis attempted to clear 6.01 meters (19-8.50) three times before bowing out. The incoming freshman now has two world titles, this one, and a U18 world title from 2015.

Competing for the second time this week, rising sophomore JuVaughn Blake closed out his freshman campaign with a bronze medal in the high jump with a personal-best clearance of 2.23 meters (7-3.75). Pulling off an impressive double at the world meet (long and high jump), Blake bookends his initial collegiate campaign as a world bronze medalist, the No. 3 high jumper in LSU history, and a two-time U.S. junior national champion.

A rising sophomore at LSU, Jake Norris of Great Britain was crowned the 2018 IAAF U20 World Champion in the hammer throw on Friday at Ratina Stadium with a British record-breaking throw of 80.65 meters (264-7).

With the win, Norris becomes the first lad from Great Britain to win a world junior title in the hammer throw. It had been since 1988 that Great Britain had even medaled in a throwing event on the junior stage, much less winning a gold medal. Norris joins the likes of Sophie Hitchon, a 2010 women’s junior world champion and 2016 Rio Olympics bronze medalist, as the only two Brits to win a world junior hammer throw title.

By far the best thrower in the finals, Norris racked up three throws of over 78 meters while the rest of the field only accounted for one. After earning an extra three throws with a qualifying mark of 78.17 meters (256-5), the up and coming sophomore launched his fourth throw of the meet 80.65 meters (264-7) to break his own British U20 record that he set a few weeks ago in what would turn out to be the winning toss.

Damion Thomas made his presence felt on the world stage Thursday evening in Finland. Running in the finals of the 110 meter hurdles, the co-world record holder (12.99), cleared 10 39-inch hurdles at Ratina Stadium in 13.16 seconds to claim his first-career world title. A rising superstar, Thomas had the third-slowest reaction time out of the blocks but he remained calm. By the third hurdle, Thomas had closed the gap and asserted himself as the leader of the race and he never looked back on the way to beating his teammate, Orlando Bennett (13.33/second place) by a wide margin.

“It’s an amazing feeling. I just want to thank God,” the Jamaican hurdler said. “It means a lot. Knowing that we are such a small country compared to these other ones and we’re still able to do stuff on a global stage. It’s going to mean a lot back home.”

In the 800 meter run finals, incoming Lady Tiger Katy-Ann McDonald took seventh with a readout of 2:04.08; she’ll arrive in Baton Rouge in August. A rising sophomore, Jurnee Woodward, closed out her freshman season with a 12th-place finish at the world meet as she represented the United States in the 400 meter hurdles; she circled the track with a time of 58.20 to place fourth in her heat.

Every athlete that was running in a preliminary or semifinal round that represented LSU advanced on Wednesday. Damion Thomas, the U20 co-world record holder in the 110 meter hurdles (12.99), ran a time of 13.41 in his opening round to win his heat to advance to the semifinals. In the semifinal round, the Jamaican registered a time of 13.37 to take second in his heat and advance to Thursday’s final at 1:02 p.m. CT.

Damion Thomas wins his heat and has the fastest run of the day at 13.41 over the hurdles.

He’ll line it up again in a few hours for the semi finals.#IAAFTampere2018 #GeauxTigers pic.twitter.com/MyfuRCPtDF

In the field events, Jake Norris (hammer throw/Great Britain) and Mondo Duplantis (pole vault/Sweden) easily advanced to the finals in their respective events. Norris registered a hammer throw of 76.95 meters (252-5) in the qualifications stages to advance to Friday’s final at 9:50 a.m. CT. Duplantis, who already holds the world U20 record, cleared 5.30 meters (17-4.50) in the qualifying round of the pole vault; he’ll go for a world title on Saturday at 5:50 a.m. CT. Representing the United States in the long and high jump, JuVaughn Blake registered a ninth-place finish at his first-career world meet in the long jump with a bound of 7.63 meters (25-0.50).

Job done for @mondohoss600 in Tampere

Looking forward to being fresh and snappy for the final#IAAFworlds pic.twitter.com/7LunoDoVnP

Jurnee Woodward showed great poise in her first-round run of the 400 meter hurdles with a time of 58.91 to take second in her heat and advance to Thursday’s semifinals at 10:50 a.m. CT. Incoming Lady Tiger, Katy-Ann McDonald clocked a personal best of 2:03.20 in the semifinals of the 800 meter run to advance to the finals that will be contested on Thursday at 12:48 p.m. CT.

Representing the Purple and Gold while also donning their countries colors will be four current Tigers – Damion Thomas (110m hurdles/Jamaica), Jurnee Woodward (400m hurdles/USA), JuVaughn Blake (high jump and long jump/USA) and Jake Norris (hammer throw/Great Britain) – and the two incoming Tigers – Mondo Duplantis (pole vault/Sweden) and Katy-Ann McDonald (800m and 1500m/Great Britain) – will wrap up LSU’s full contingent. Fans can keep up with the most up to date information by following LSUTrackField on Twitter.

The six-day meet hosted in Finland pits the best U20 athletes in the world against each other as the juniors look to establish their name on the world stage. All four current Tigers that made it to Finland won national titles in their respective events over the last month. Thomas tied the world record at the Jamaican Championships with a 12.99 over 39-inch hurdles to claim gold and earn a spot on the Jamaican team. Norris, the third-place finisher in the hammer throw at the NCAA Championships in June broke his own British record in the hammer throw with a six kilogram implement in mid-June with a heave of 80.45 meters (263-11). Blake and Woodward won titles at the USATF Junior Championships in Indiana the same weekend that Norris qualified for the U20 World Championships. Blake swept a pair of titles winning the long jump and the high jump, while Woodward used a tremendous kick in her 400 meter hurdle final to win gold at the national meet.

Duplantis, already the world junior record holder in the pole vault with a clearance of 5.93 meters (19-5.50) at the Louisiana State Championships in late May, enters the meet as the favorite. He has already won a Diamond League event in the pole vault by claiming gold at the Stockholm meeting on June 10. He has competed three other times on the Diamond League circuit and he has finishes of second, second and fifth in those three appearances. McDonald owns a season best of 2:04.14 in the 800 meter run that she ran near the end of June. She ran in the first round of the 800 meter run on Tuesday morning and qualified for the semifinals with a time of 2:07.24.