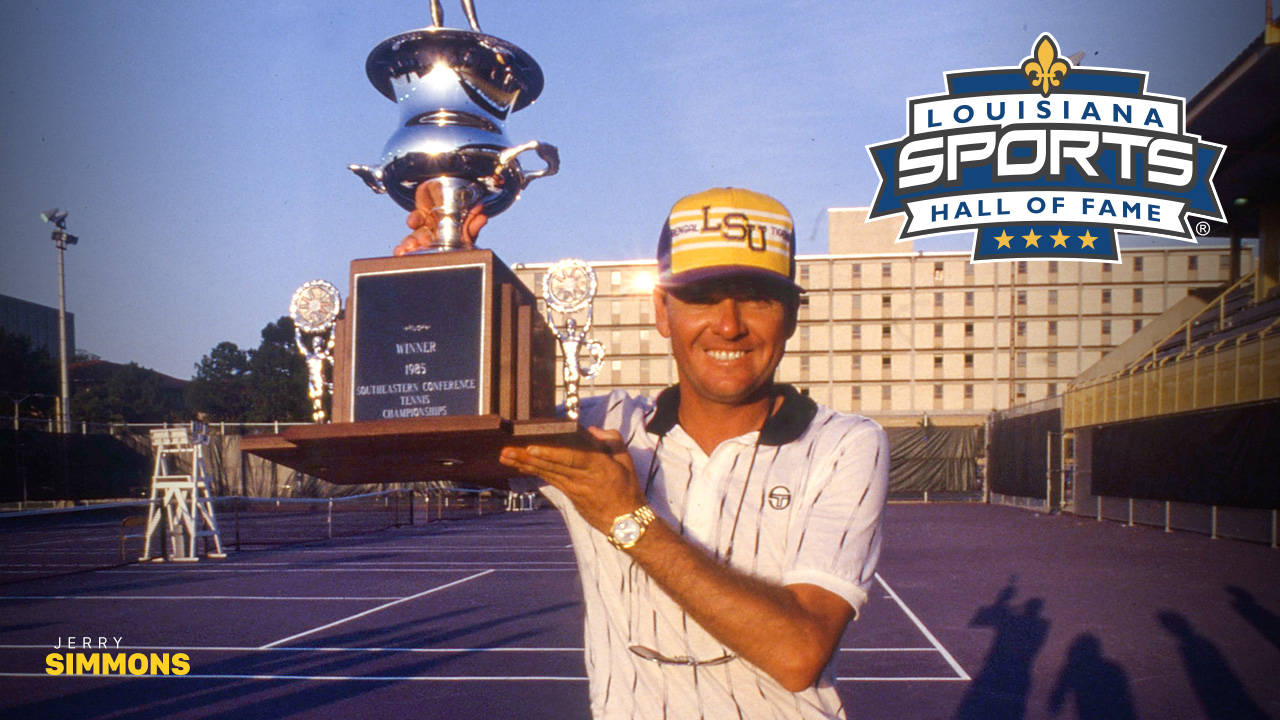 (Editor’s Note: The annual induction ceremony for the Louisiana Sports Hall of Fame is set for this Saturday, June 30, at the Events Center in Natchitoches. Former Russ Springer is one of the LSU inductees in this year’s class. The ceremony this year will be televised live for the first time by Cox Sports TV beginning at 6 p.m. CT.)

By Bruce Brown
Written for the LSWA

Jerry Simmons knew it was risky, but it was a risk worth taking.

He was 24 years old and wanted to be a head tennis coach, so he accepted the position at then-USL in 1971 and headed east from Texas.

The Ragin’ Cajun program had gone winless the previous season, against lackluster competition, but the Amarillo native was undaunted. He managed a 10-11-2 inaugural campaign in 1972, then got busy winning consistently.

By the time he was through, Simmons had won 214 matches at USL and 278 more at LSU to become the all-time winner at both Louisiana schools, leading both to previously unheard of heights.

His rise from modest roots has earned him inclusion in the Louisiana Sports Hall of Fame. Simmons joins 10 others in the Class of 2018 to be inducted Saturday evening, June 30, at the Natchitoches Events Center, as the centerpiece of a four-day celebration beginning June 28.

In 1978, energized by Simmons’ innovative Rolex Tennis Classic the previous fall, then-USL surged to a second straight Southland Conference crown and completed the season with all the finalists in both singles and doubles and total domination of the SLC Tournament at Cajun Courts.

Ten years later, Simmons’ 1988 LSU Tigers finished No. 2 in the nation with a 27-2 record and a runner-up effort at the NCAA Tournament, earning Simmons National, Regional, SEC and Louisiana Coach of the Year accolades.

Simmons was the youngest coach ever inducted into the Intercollegiate Tennis Association’s Hall of Fame – not surprisingly, 20 years ago in 1998.

Then in 2008, he was wrapping up a successful post as director of the USTA/ITF Junior Circuit, one of his favorite roles that stressed finding homegrown talent and preparing them for Grand Slam challenges to come.

And now, Simmons is taking his rightful spot in the Louisiana Sports Hall of Fame’s Class of 2018.
Whatever it is about years ending in 8, Simmons made it work.

But it didn’t happen overnight.

“I took a major chance because I wanted to be a head coach,” Simmons said of his start at USL. “There wasn’t much in the cupboard, and we had no scholarships to offer at first. I got late bloomers out of junior colleges like Skipper Hunt, Carter Lomax and Umberto Izquierdo.

“Our schedule was terrible. We had lost to every directional school in Louisiana (0-11 in 1971). The biggest challenge was trying to convince the administration to give us any money.”

“We were his foundation for what he did later in life,” Hunt said. “We were there in his infancy years. He was a good facilitator, and he delivered on every promise he made to us. He promised us new courts, and by the time I left we had a state-of-the-art facility.”

A Cajun Tennis Association was formed.

The Cajun Courts complex was completed.

Simmons, who had traveled to Lafayette with his uncle when he was 14, was making a home for himself. Unflinching, he took his Cajuns to play powers like Texas, UCLA, Stanford and Cal to test them.

Then came 1977, when the Cajuns broke through to defeat rival Lamar in the Southland Conference tournament title in Beaumont, Texas. They would win the next three tournaments and five of the next six years, as well as going 26-0 in league dual matches through 1982.

Also in 1977, Simmons created the Rolex Tennis Classic, a 32-draw, elite college fall tournament that drew the nation’s best players to Lafayette. Meals and cars were provided for teams, players stayed with local patrons and fans saw what could be.

“Jerry started so many things in college tennis that everyone does today, like the Rolex and his fitness training,” Paul Griffith said. “He never rested mentally, and he’s still that way.

“We always had everything we needed to succeed – uniforms, equipment, travel, meals. He gave us the tools to do something with them. He took my style and made it better, did a good job of being flexible with his players.”

Properly inspired, the Cajuns swept the 1978 SLC tourney at Cajun Courts, with Griffith defeating Steve Hernandez for the singles title and the team of Gus Orellana and James Boustany beating Griffith and Hernandez in doubles.

“One of the most interesting things about Jerry is his great memory – his ability to remember players, matches, scores, locations with unbelievable detail,” Orellana said. “This has allowed him to recognize individuals with different talents and put together winning teams in the most competitive environments.”

“We had a great group of guys at USL,” Bryan said. “Most of us were ‘next up’ players – the kind who are told ‘if we don’t sign this guy, we’ll sign you.’ So, we played with a boulder on our shoulder.”

Tarek El Sakka became the best USL player in the Simmons years after playing Davis Cup for his native Egypt at age 14, and eventually won the Rolex, but many Cajuns were underdogs like Bryan.

Then, affter 11 years of growth at USL, it was time for more challenges.

Simmons moved east to LSU, a program with more resources but also one with a mandate to succeed.

“Bob Brodhead (athletic director) told me that if we weren’t a top 10 program within three or four years, I didn’t belong there,” Simmons said. “We were 8th or 9th in the Bernie Moore (SEC All-Sports) standings. In four years we won the Bernie Moore and were No. 2 in the nation.”

It helped to have fiery holdover Teddy Viator of Jeanerette (96-35 in singles from 1981-84), named LSU’s top student-athlete as a senior, to build around.

“We only played seven guys, but four of them were ranked in the top 20. That gave us latitude with the lineup. That was a very good team.”

“We came together, supported each other, looked after each other,” Leaycraft said. “We knew we were destined for a possible championship.”

The Tigers were in prime position to earn a title when the match was moved indoors by rain, changing the entire tone of the match and opening the door for a Stanford rally with quicker pace and serve and volley.

But LSU was a factor on the national stage, thanks to Simmons.

“He changed college tennis,” Schwing said. “He had a knack for picking out a warrior, as well as the top players. Nobody outworked us. We had fierce competition in practice.

“It took a total commitment for four years, and it was so rewarding. No position was set, so that inspired you to work harder. That sends your game skyrocketing. Eventually our condition caught up with our talent.”

Players thrived in the blue-collar environment.

“I was on scholarship, but knew I had to work hard just to get a spot on the team,” said Leaycraft, who had to work his way up to No. 1 en route to an NCAA singles crown. “That extra work propelled me to the next level.

“The college experience exceeded my expectations. It was one of the most fun times of my life.”

“When I left LSU, we were No. 9 in the nation and the top three players in the lineup were freshman,” he said proudly.

“Without a doubt, he was one of the greatest coaches of all time,” Leaycraft said. “He always had time for each individual, always tried his best. He would do anything and everything for his players.”

“He dreamed of being more successful all the time,” Schwing said. “That added up in the win column, and we won a lot of matches from behind.”

“We were always well prepared and in great shape,” Leaycraft said. And always prepared to fight.

Fittingly for a coach who recruited players with a warrior mentality, Simmons is a devotee of Generals George S. Patton and Thomas “Stonewall” Jackson, as well as basketball mentor John Wooden.

Just as with those leaders, Simmons’ players were always ready to join him in battle.