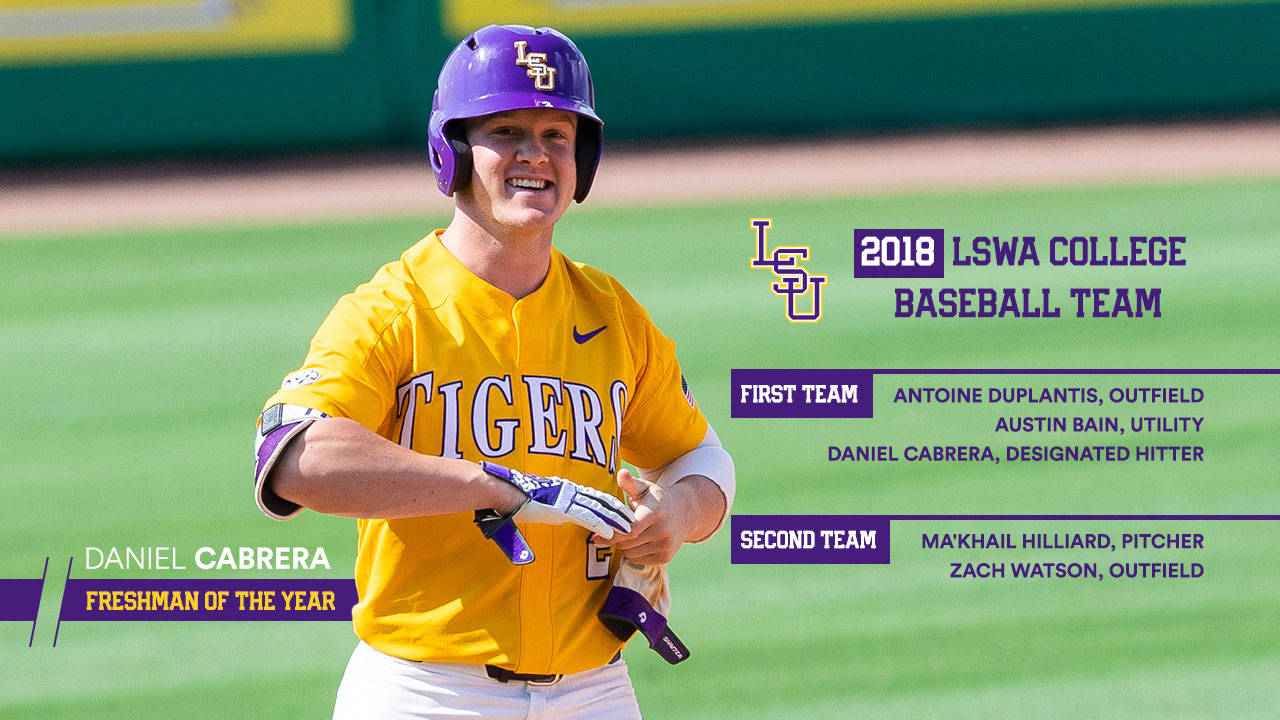 Written for the Louisiana Sportswriters Association

Northwestern State secured three individual honors as catcher David Fry was named Hitter of the Year, pitcher Jerry Maddox was voted Newcomer of the Year and NSU skipper Bobby Barbier was honored as Coach of the Year.

Louisiana-Lafayette left-hander Colten Schmidt was tabbed as the LSWA Pitcher of the Year.

The team was selected by a statewide panel of college baseball sports information directors and media members. The players’ statistics considered by the panel are through their respective conference tournaments.

Cabrera, a Baton Rouge native and former Parkview Baptist product, turned in an impressive inaugural season for the Tigers as he was a near unanimous choice in earning LSWA Freshman of the Year honors. The Collegiate Baseball Freshman All-America was named to the Freshman All-SEC team after posting a .330 average with eight home runs and 52 RBI.

He ranked fourth in the SEC in doubles with 18 and fourth in RBI with 52. Cabrera posted a 12-game hitting streak – LSU’s second-longest of the season – from May 9 through May 25 and batted .320 in the SEC Tournament with two doubles, five RBI and three runs.

Fry, the Southland Conference Player of the Year, was the overwhelming choice as LSWA Hitter of the Year after posting a .336 average with 12 home runs and 55 RBI. The first baseman earned third-team All-America honors by Collegiate Baseball and ranked third nationally in doubles entering NCAA Regional.

The Grapevine, Texas native posted his second straight 20-double, 10-homer season – the only two in school history for the Demons and led the SLC in both home runs and RBIs.

Maddox, the SLC Newcomer of the Year, earned LSWA Pitcher of the Year honors after posting a 7-3 record and 2.03 earned run average during his inaugural season on the mound for the Demons. The right-hander began the season as NSU’s mid-week starter before moving into the weekend rotation on April 8. He turned in six quality starts in his first six SLC appearances, going 4-1 with a 1.71 ERA during that span and went 12 innings without giving up an earned run in a two-start span March 27-April 8.

Barbier claimed LSWA Coach of the Year honors after taking a team that was picked to finish 11th in a 13-team Southland Conference and led them to the No. 3 seed in the conference tournament. The Northwestern State alum helped the Demons to their most victories since a 41-win campaign in 2005 (which was Barbier’s junior season on the diamond) and biggest turnaround in school history as he took a team that won 20 games in 2017 to 37 wins.

In his second season at the helm, Barbier took over a pitching staff that produced a 6.06 team earned run average in 2017 to a respectable 3.42 in 2018. The Lafayette native also molded a team that included 17 newcomers to the roster that won 16 of its final 20 games.

Schmidt, who started the season as the Ragin’ Cajuns mid-week starter before earning the No. 1 slot in the weekend rotation by mid-season, was a near unanimous choice for LSWA Pitcher of the Year after posting a 7-0 record with a 2.45 ERA.

The southpaw, who was also named the Sun Belt Pitcher of the Year, ranked fourth in the nation in walks per nine innings (0.76) and fifth in strikeout to walk ratio (10.00) during the season. Schmidt led the Sun Belt in both ERA and innings pitched notched a quality start in 10 of his 15 outings for the Ragin’ Cajuns.

Joining Maddox and Schmidt as first-team pitchers were Logan Bailey of Louisiana Tech and Carlisle Koestler of Southeastern Louisiana. Beau Bratton of New Orleans was named the first-team catcher with Fry (first base) joined in the infield by UNO’s Owen Magee (third base), Marshawn Taylor of Grambling (shortstop) and 2017 LSWA first-teamer Joe Provenzano of McNeese (second base).

Hilliard and Watson highlighted the second team with Hilliard joined on the mound by Louisiana Tech’s David Leal, Renny Tolentino of LSU Shreveport and Bryan Warzek of New Orleans. Tolentino’s battery mate – freshman Jake Gray – was selected as the second-team catcher with Trevor Jensen of Tulane (first base), SLU’s Cody Grosse (second base), Bryce Laird of LSU Alexandria (third base) and Nicholls’ Joey Morales (shortstop) rounding out the infield.

Parker Bates of Louisiana Tech and Daniel Lahare of Louisiana-Lafayette joined Watson as outfield selections with Logan Constantine of LSUA selected as the second-team utility player and Grambling’s Rafael Ramirez at designated hitter.