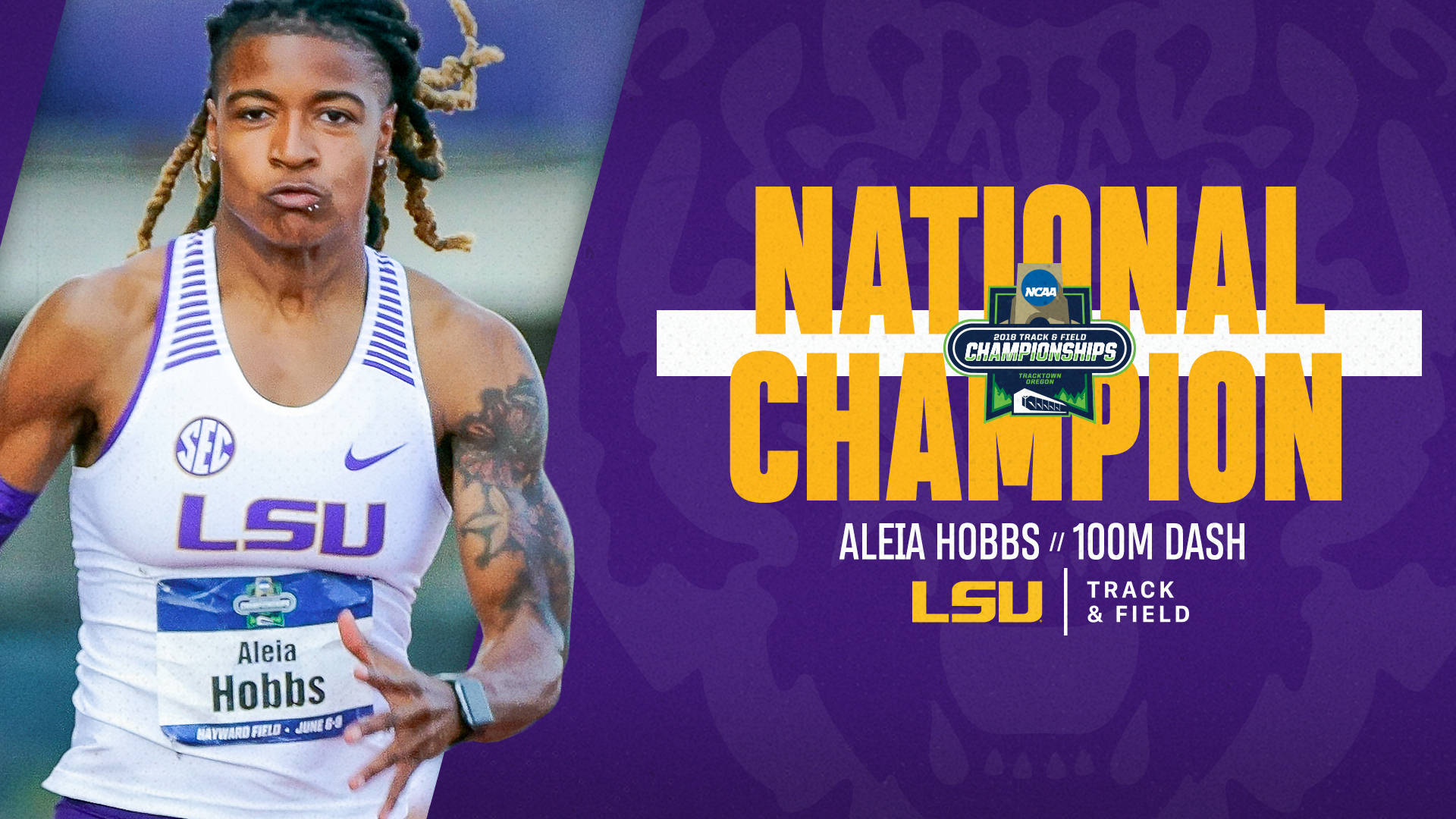 Eugene, Ore. – The LSU women’s track field team scored 41 points on the final day of competition at Hayward Field to earn a sixth-place finish at the 2018 NCAA Championships on Saturday to conclude the season.

The Tigers used scoring efforts from eight different events that were highlighted by national titles by Aleia Hobbs (100 meter dash) and the 4×100 meter relay. USC took the team title with a final team score of 53 points.

The most legendary 4×100 meter relay team of collegiate history put the finishing touches on the unblemished season. The Tigers’ sprint relay – Mikiah Brisco, Kortnei Johnson, Rachel Misher and Aleia Hobbs – closed out the storybook season with a national title by clocking a time of 42.25; the time of 42.25 was .81 seconds better than the runner-up Oregon (43.06). It’s the second title for the LSU women in the last three years and it’s the 15th 4×100 meter relay title in program history, which leads the NCAA. With the 42.25, LSU now owns five of the top six times and six of the top eight times in collegiate history. Earlier this week, the Tigers set the NCAA meet record with a 42.09.

“It feels really good,” Brisco noted. “I just made sure I did my part since I knew the conditions weren’t going to be up to par. I just made sure I got my team to a good position. Kortnei [Johnson] and my exchange was really good, so I felt like we started the race off really well and then we just finished it so we could get our team points.”

A short time later, Alea Hobbs, made sure that she was going down in the record books as one of the most accomplished sprinters in NCAA history. Her 2018 season was nothing short of sensational and she closed out her Purple and Gold career with five of the top eight NCAA wind-legal times in the 100 meter dash. Running in less than ideal conditions on the final day of her collegiate career, the New Orleans native didn’t let a torrential downpour and running into a headwind stop her from securing her first career outdoor individual national title with a time of 11.01 in the 100 meter dash. It marks the eighth title in program history for the LSU women, a mark that leads the NCAA. Fellow sprinter and the 2017 NCAA 100 meter dash champion, Mikiah Brisco, sprinted her way to a sixth-place finish in the event with a readout of 11.44. With Brisco winning the title in 2017 and Hobbs winning the title in 2018, LSU has now won back-to-back 100 meter dash titles four times in program history. Brisco will also go down as one of the best sprinters to come through the LSU track and field program. Her career-best time of 10.96 in the 100 meter dash that she clocked to win the 2017 national title is the fifth fastest in NCAA history. Brisco closes her career as a 11-time First Team All-American and three-time national champion while Hobbs garnered six First Team All-America honors and three national titles during her career.

“The rain was coming down harder than I expected,” Hobbs mentioned after her triumph. “So, the whole race I really couldn’t see anything. I was just running. I couldn’t even see where the finish line was at, and I just kept running until I was like, okay I guess I’m done.”

Fellow senior Kymber Payne finished out her Purple and Gold career with a third-place showing in the 400 meter hurdles with a time of time of 56.88. Payne is a five-time First Team All-American and her career-best 400 meter hurdle time of 55.50 ranks as the seventh fastest in LSU History.

Kortnei Johnson, a member of the most accomplished 4×100 meter relay in school history, is now a six-time First Team All-American after her gold in the 4×1 and fifth-place finish in the 200 meter dash. Johnson sprinted around the Bowerman Curve with a time of 23.20 to lock up the fifth-place finish.

Tonea Marshall ran herself into a sixth-place finish in the 100 meter hurdles with a time of 13.09 to score three points for the Tigers. Rachel Misher circled the track once with a readout 52.53 to place seventh in the 400 meter dash. The final scoring effort of the day came from the 4×400 meter relay squad of Misher, Payne, Zakiya Denoon and Cassondra Hall who clocked a time of 3:32.08 to place sixth.

Kaitlyn Walker closed out her junior season by competing in the high jump. She was unable to clear the opening height of 1.73 meters (5-8.00) and earned Honorable Mention All-America honors.