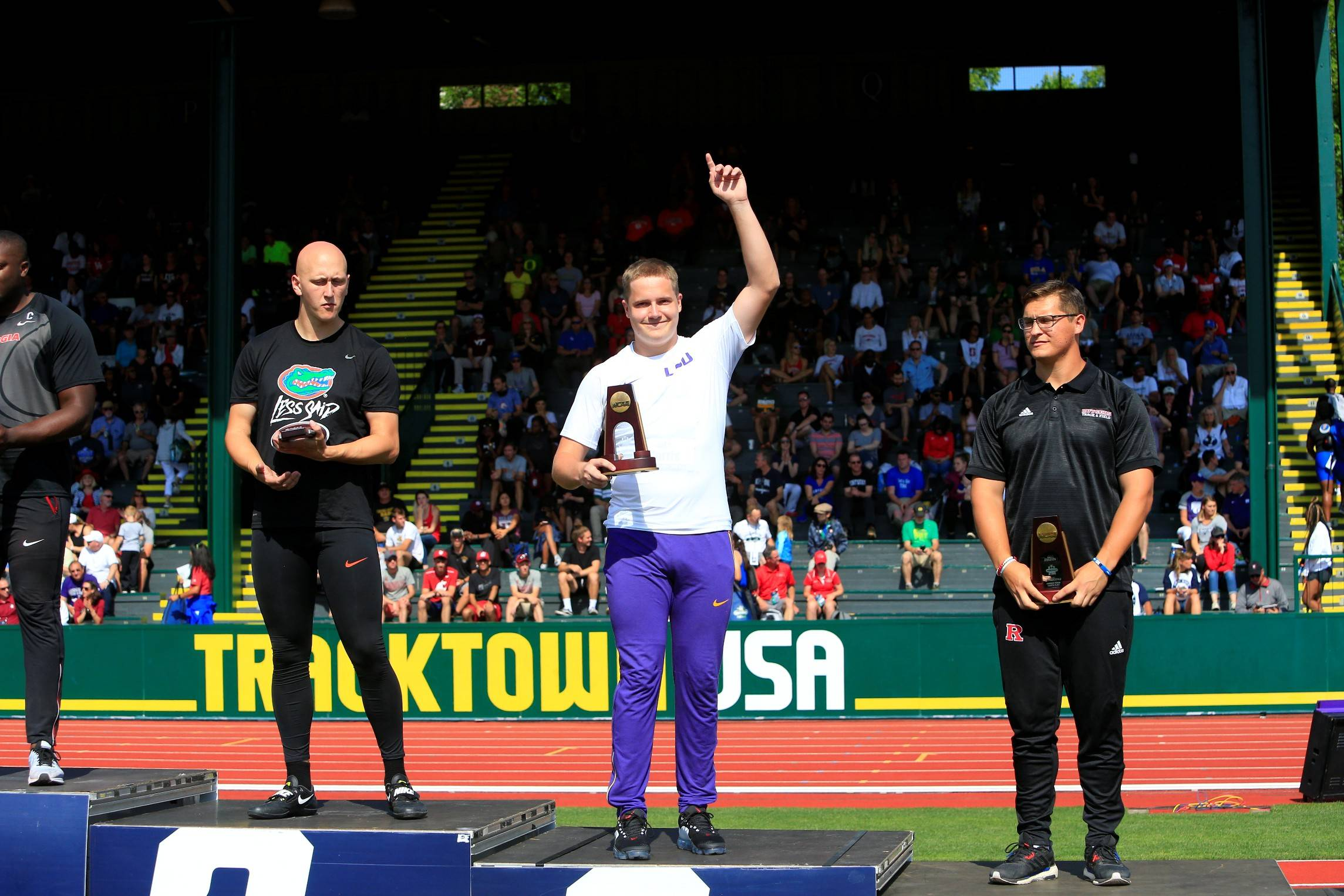 Eugene, Ore. – Freshman hammer thrower Jake Norris registered the best toss of his career, a 240 foot, 3 inch throw, that broke an eight-year old school record to highlight day one of the NCAA Championships at Hayward Field for the No. 8 LSU Tigers.

Entering the national meet with the seventh-best throw in the nation, the freshman exceeded his predicted finishing spot and picked up six points for the Purple and Gold with a third-place showing. The 240 foot, 3 inch throw (73.24 meters) bested Walter Henning’s previous school record (239-5) that was set in 2010. Norris will be named a First Team All-American for his performance that also broke his own British U20 record. Norris was the top freshman finisher at the national meet in the hammer throw.

Norris’ inaugural season as a Tiger comes to a close as a five-time event winner. The SEC All-Freshman Team performer has a big summer ahead of him as he will prepare to compete in the hammer throw at the 2018 IAAF World U20 Championships in Finland in July.

Rayvon Grey collected the best all-conditions long jump of his career on his third attempt of the event with a wind-aided mark of 7.96 meters (26-1.50) to earn his first career All-America honor. The 26 foot, one and a half inch jump was good enough for fourth place in the event. With Grey’s and Norris’ scoring efforts, LSU men’s team sits in a two-way tie for seventh place with 11 points.

Damion Thomas registered the fourth-best qualifying time of the day in the 110 meter hurdles with a personal-best readout of 13.44. The 13.44 that the Florida native registered is the fifth fastest in U20 history and second fastest in LSU history; he will run in the finals on Friday night at 8:12 p.m. CT. Jaron Flournoy advanced out of the 200 meter dash semifinals with a time of 20.26, the third fastest of the day. The men’s 4×400 meter relay of Jahnoy Thompson, Correion Mosby, Renard Howell and Jaron Flournoy closed out the first day of competition with a solid qualifying time of 3:02.68.

Renard Howell missed out on the finals in the 200 meter dash with a time of 20.66; the 20.66 earned him a 15th-place finish and he will be named a Second Team All-American. Competing in his first event of the NCAA Championships, JuVaughn Blake leaped out to a 7.48 meters (24-6.50) to place 19th in the long jump. He was the top freshman finisher of the event and will return to action on Friday night in the high jump. The men’s 4×100 meter relay of Kary Vincent Jr., Renard Howell, Correion Mosby and Jaron Flournoy were unable to get the stick around the track when Howell and Mosby had a mishap on the second exchange of the race. Christian Boyd was unable to advance to the finals of the 400 meter hurdles; the JUCO transfer placed 22nd with a time of 53.34.

The 2018 NCAA Division I Outdoor Track and Field Championships will be broadcasted exclusively on the ESPN networks. The men’s meet will air on ESPN2 (Wednesday/6:30 p.m. CT) and ESPN (Friday/7:30 p.m. CT) while the women’s meet will follow the same schedule – ESPN2 (Thursday/6 p.m. CT) and ESPN (Saturday/5:30 p.m. CT). In addition to the coverage on national television, all field events will be streamed in their entirety on WatchESPN; the full list of streams can be found at ncaa.com. Live results and heat sheets of the four-day meet will be available at ncaa.com.