LSU Rallies to Advance to Regional Final Round 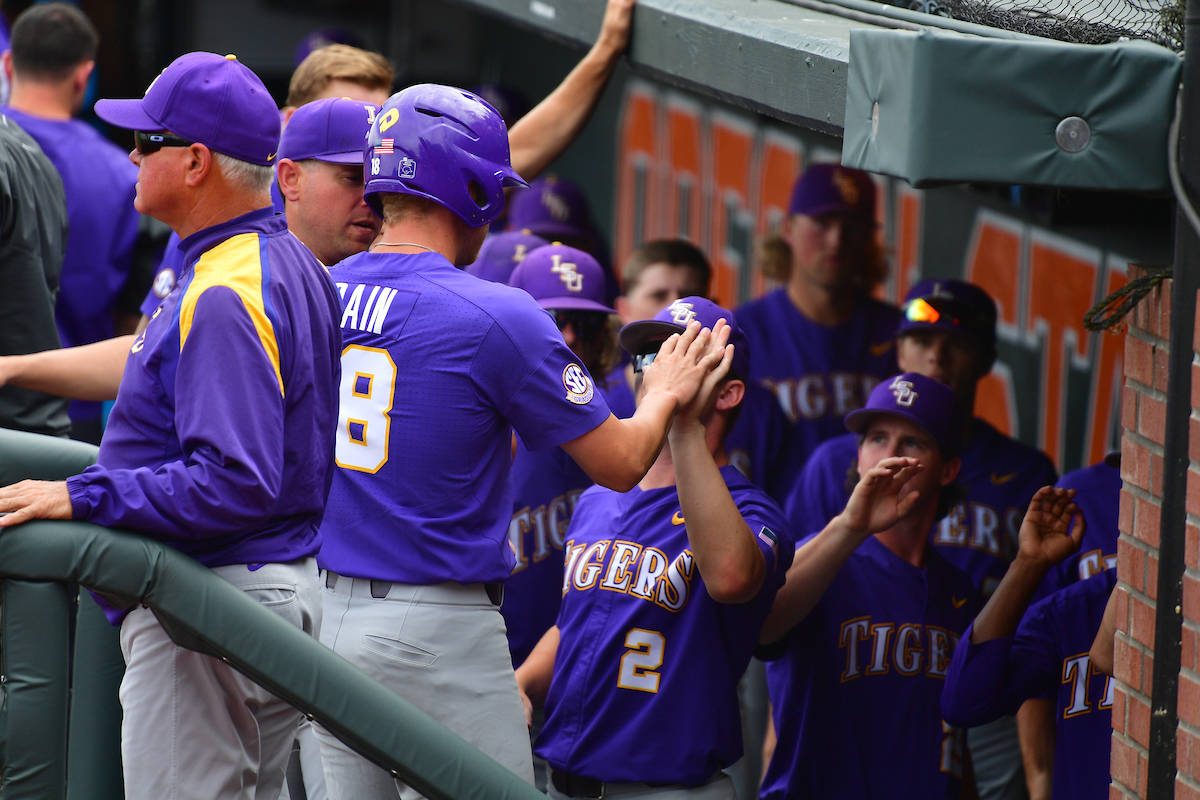 CORVALLIS, Ore. – LSU erupted for five runs in the top of the ninth inning Sunday, erasing a 5-4 deficit and posting a 9-5 win over Northwestern State in an NCAA Corvallis Regional elimination game at Goss Stadium.

The Tigers improved to 39-26 this year, while Northwestern State ended its season with a 38-24 record. LSU advanced to an NCAA Regional championship round for the seventh straight year with Sunday’s victory.

LSU will play at 8 p.m. CT Sunday night against Oregon State in a game that will be televised by ESPNU. If Oregon State wins the game, the Beavers are the regional champions and advance to play host to a Super Regional next week.

If LSU wins Sunday night, the Tigers and Oregon State will meet again at 9 p.m. CT Monday to determine the regional champion.

All LSU games may be heard on affiliates of the LSU Sports Radio Network. Live audio and stats are available at www.LSUsports.net.

LSU reliever Matthew Beck (4-1) was credited with the win as he worked three innings and allowed two runs – one earned – on two hits with one walk and three strikeouts.

Todd Peterson worked a perfect ninth inning, including one strikeout, to secure the victory for the Tigers.

Northwestern State closer Jose Vasquez (6-2) was charged with the loss as he surrendered five runs – four earned – on five hits in three innings with one walk and one strikeout.

“Their closer was tough, but we were able to get some big hits in the ninth inning,” said LSU coach Paul Mainieri. “The hitters came through in a big way for us after we had struggled with some scoring opportunities throughout the game. We’re going to go back to the hotel for a couple of hours and work on a pitching plan to face a very good Oregon State lineup tonight.”

Rightfielder Antoine Duplantis walked to lead off the top of the ninth inning, and after leftfielder Daniel Cabrera flied out, Duplantis stole second base. First baseman Austin Bain followed with an infield single, and catcher Nick Coomes tied the game at 5-5 with a single to left field.

LSU grabbed the lead on an RBI single by third baseman Jake Slaughter, and shortstop Hal Hughes increased the advantage to 8-5 with a two-run double. The Tigers’ final run of the inning scored when centerfielder Zach Watson‘s ground ball was mishandled at shortstop, allowing second baseman Brandt Broussard to score from third base.

The Demons took a 5-4 lead in the bottom of the eighth when first baseman Peyton Davis launched a solo homer off of Beck for his fifth dinger of the season.

LSU opened the scoring in the top of the first when Watson deposited the first pitch from Northwestern State starter Nathan Jones over the left-field wall for his seventh homer of the year.

The Tigers added a run in the third when Bain tripled and scored on a Coomes singled, but the Demons tied the game at 2-2 in the fourth on a two-run homer by third baseman Sam Taylor off of LSU starter Cam Sanders.

The Demons scored two runs in the sixth to break the tie as leftfielder Lenni Kunert unloaded a solo homer and centerfielder Kwan Adkins provided an RBI single.

LSU responded to knot the game at 4-4 with two runs in the seventh as Cabrera lined a two-run single.

Sanders pitched the first five innings for LSU, allowing three runs on five hits with one walk and four strikeouts.