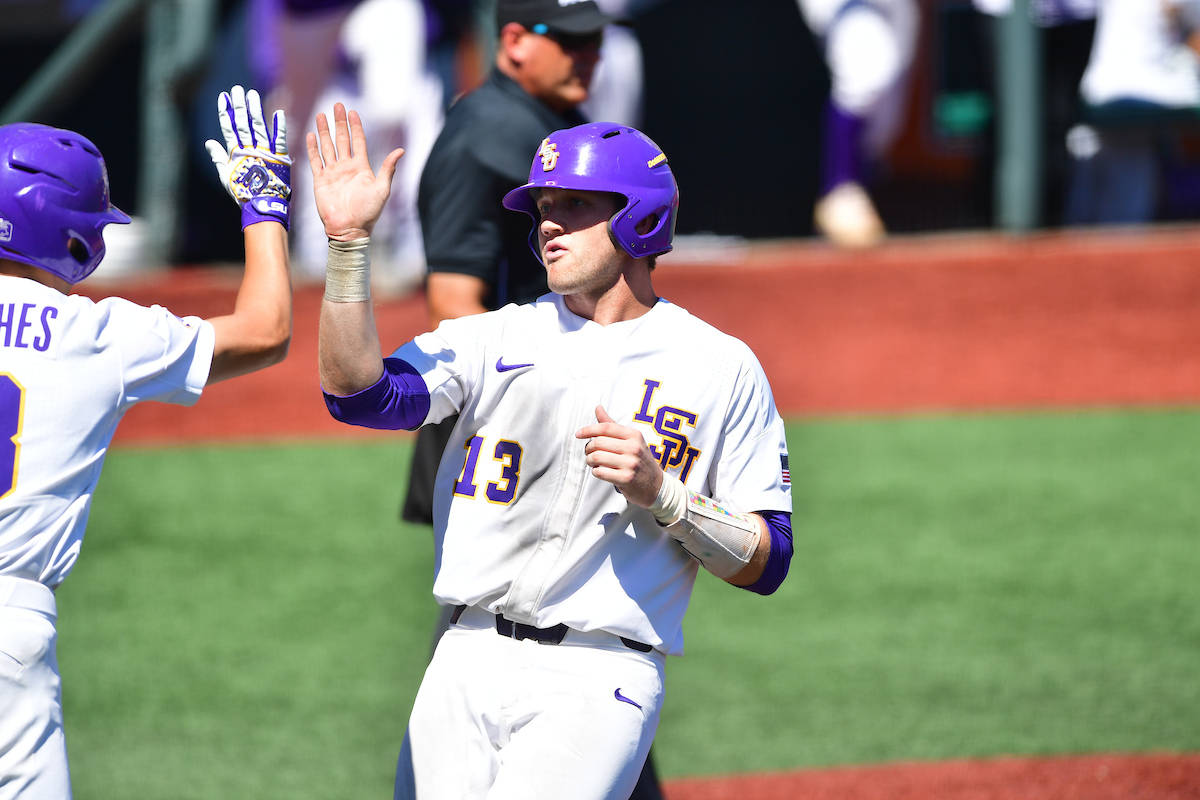 Saturday’s LSU-Oregon St. game will be televised by ESPN2 and viewed online at WatchESPN.com and the Watch ESPN app.

All LSU contests will be broadcast on affiliates of the LSU Sports Radio Network and streamed free at www.LSUsports.net/live.

Coomes led LSU’s nine-hit attack Friday with three singles, including lead-off base hits in the second and sixth innings that sparked three-run outbursts.

“Nick Coomes has just been playing great,” LSU coach Paul Mainieri said. “His at-bats are quality, he’s hustling behind the plate and he’s been a tremendous leader for us.”

Fontenot (3-0) was credited with the win after relieiving starter Nick Bush to begin the sixth inning with the scored tied at 3-3. Fontenot worked three innings, limiting San Diego State to one run on two hits with one walk and four strikeouts.

LSU right-hander Todd Peterson retired the Aztecs in order in the top of the ninth inning to record his sixth save of the season.

“It’s vital in a regional to win the first game of the tournament, and we got the job done today,” Mainieri said. “We played well enough to win today; it wasn’t our greatest game, but I’m proud of our team for earning this victory.

“I thought the real key to the game today was Devin Fontenot and his performance. Devin did a tremendous job and Todd Peterson was great in the ninth to secure the win.”

SDSU reliever Jacob Erickson (5-4) was charged with the loss, as he surrendered two runs on three hits in 2.2 innings with one walk and two strikeouts.

LSU struck for three runs In the bottom of the second inning against SDSU starter Jorge Fernandez, loading the bases with nobody out when Coomes and designated hitter Beau Jordan delivered singles, and third baseman Jake Slaughter was hit by a pitch.

Shortstop Hal Hughes grounded out to first base to score Coomes, Jordan scored on a grounder to shortstop by second baseman Brandt Broussard, and Slaughter came home on a Fernandez wild pitch.

San Diego State responded with three runs in the top of the fourth against Bush when centerfielder Julian Escobedo scored from third on a wild pitch, and second baseman Jacob Maekawa chopped a two-out, two run-double down the left-field line.

The Tigers regained the lead in the bottom of the sixth when Coomes singled, advanced to second on an Erickson wild pitch and scored on Slaughter’s RBI single.

“That was a tremendous at-bat by Jake,” Mainieri said. “He laid off some really tough pitches, especially with two strikes, and he came through with a big hit to give us the lead.”

LSU stretched the lead to 6-3 with two more runs in the sixth as centerfielder Zach Watson and rightfielder Antoine Duplantis produced run-scoring singles.