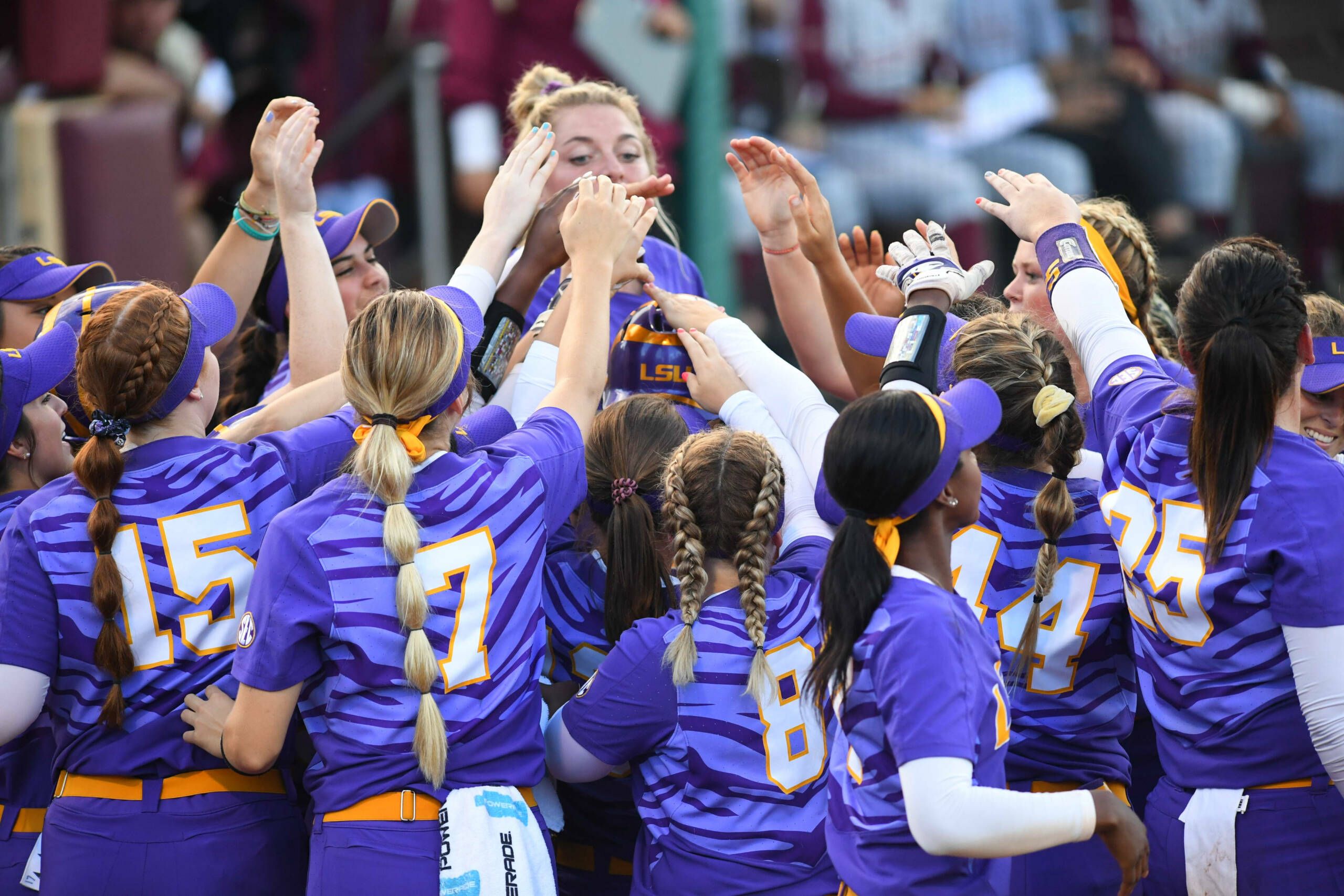 TALLAHASSEE, Fla. – Behind a nine-hit onslaught from the Tigers’ bats, led by Amanda Doyle‘s three RBI game, the LSU softball team took down No. 6 Florida State, 6-5, in the opening game of the NCAA Tallahassee Super Regional, Friday night at JoAnne Graf Field.

The Tigers are now just one win away from advancing to the NCAA Women’s College World Series for the seventh time in school history, the fifth time under head coach Beth Torina and the fourth-straight year.

The two teams will return to the field at 4 p.m. CT Saturday. If the Seminoles force a third game, game three will follow 30 minutes after due expected weather in the Tallahassee area on Sunday.

Starting pitcher Allie Walljasper (18-6) earned the win for the Tigers with 6.2 innings of work. The senior allowed five runs on six hits and struck out four. Fellow senior Carley Hoover entered the game for the final out of the game following Florida State’s late inning comeback attempt. Hoover struck out the batter on a 3-2 count to capture her 10th career save.

LSU got on the board first in the second inning after Doyle led off the inning with a solo home run over the left field wall, giving the Tigers a 1-0 lead.

T2 | DINGER!!! @amandadoyleeee SMASHES a leadoff solo shot over the left field wall to give the Tigers a 1-0 lead! Let’s GEAUX!!

Walljasper retired the first seven Seminoles of the game before giving up her first hit of the game in the third.

The Tigers scored four runs on three hits in the fifth inning. The inning started with a Michaela Schlattman solo blast, her eighth of the year and third in the postseason. The Tigers brought in their third run of the game on a bases-loaded RBI walk by Emily Griggs. Doyle followed with a two-run double down the left field line, extending the Tigers’ lead to 5-0.

Another one for LSU! Michaela Schlattman’s 💣 to give LSU a 2-0 lead in the ⬆️ fifth! #NCAASoftball pic.twitter.com/PHSBeop2yF

Florida State cut the Tigers’ lead to 5-2 in the fifth inning off a double to right center and a sacrifice fly.

LSU padded their lead in the top of the seventh inning with what proved to be a crucial run. Becca Schulte led off the inning with a double off the wall in right-center field and moved to third on a ground out. Taryn Antoine followed with an RBI single through the left side on the first pitch to make it a 6-2 lead.

The Seminoles closed in on Walljasper and the Tigers in the bottom of the seventh with a two-out, three-run home run. Hoover entered for the final out to close the door and take the opening game.

Notes
>> Doyle’s home run was her eighth of the year and her first in an NCAA Tournament contest. Doyle tied her career high with three hits, her fifth three-hit game.

>> Schlattman’s home run in the fifth inning was her eighth on the year and her third in postseason.

>> LSU hit four doubles in the game, which were the second most for an LSU team in an NCAA Tournament.

>> Hoover’s save was the 10th of her career. She is two away from tying Britni Sneed for the most in school history with 12.

>> LSU won the first game of an NCAA Super Regional contest for the first time since 2015. The last two seasons, LSU has fallen in the opener on the road before taking the next two to advance to OKC.

>> The Tigers improved to 37-4 when scoring first.