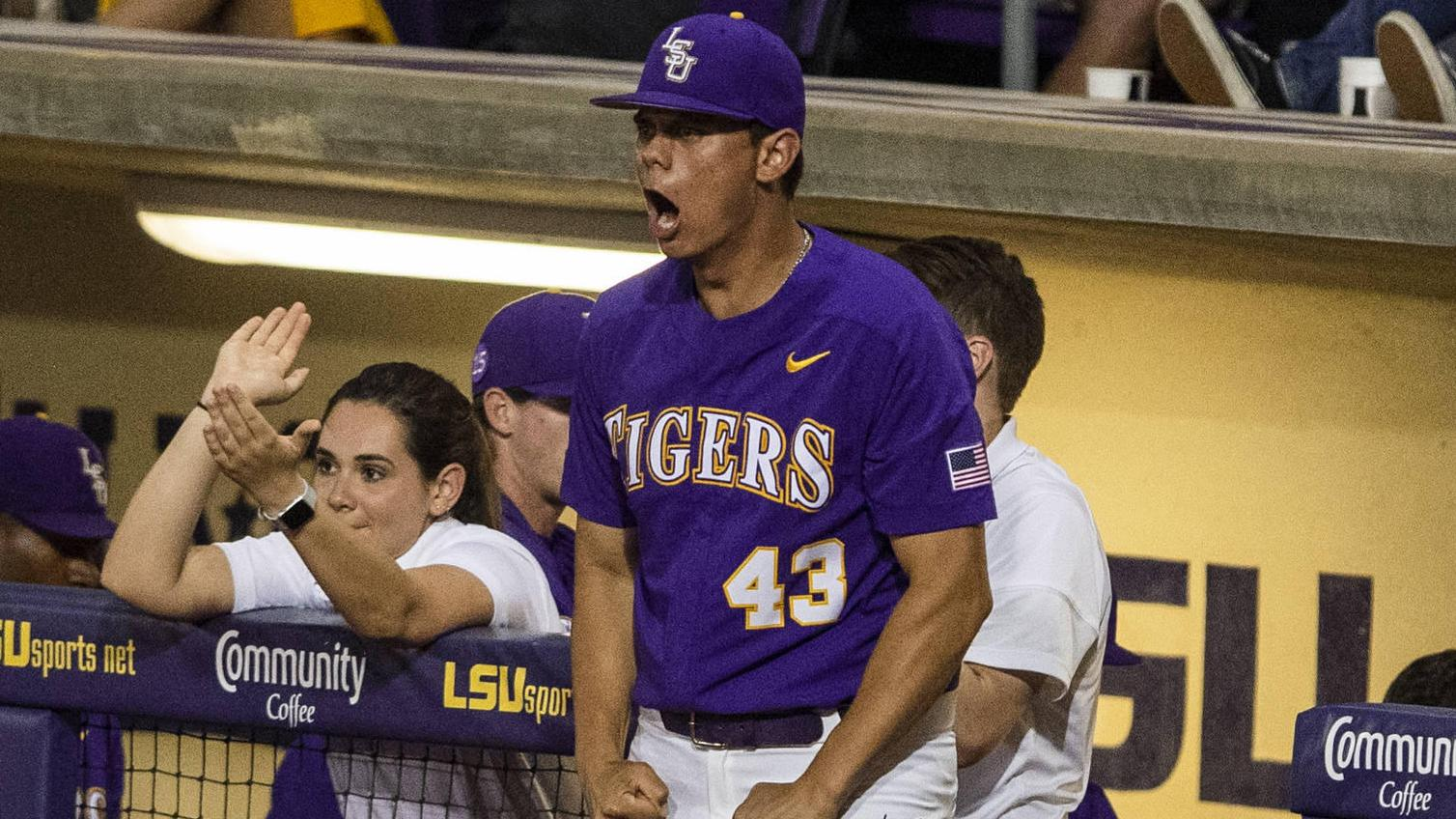 HOOVER, Ala. – LSU sophomore right-hander Todd Peterson earned his first win of the season Thursday with five courageous relief innings, and he helped his own cause with a two-run double in his first collegiate at-bat, as the Tigers posted a thrilling 6-4, 12-inning win over South Carolina in the SEC Tournament at Hoover Metropolitan Stadium.

LSU (35-24) advanced to play at approximately 6:30 p.m. Friday against Florida. South Carolina (33-24) was eliminated from the tournament with Thursday’s loss.

Peterson (1-3) pitched the final five innings of the contest, limiting South Carolina to two runs on four hits with no walks and three strikeouts. After LSU leftfielder Daniel Cabrera gave the Tigers a 4-3 lead with an RBI single in the top of the 12th, Peterson delivered a two-out, two-run double to extend the advantage to 6-3.

South Carolina narrowed the gap to 6-4 in the bottom of the 12th on a two-out, run-scoring single by designated hitter Madison Stokes, but Peterson struck out third baseman Jonah Bride to end the game.

Peterson threw 72 pitches in the outing after firing 33 pitches on Tuesday night to earn a two-inning save against Mississippi State in LSU’s opening game of the tournament.

“I will never forget this, honestly,” said LSU coach Paul Mainieri. “We have struggled through some really ugly games and tough days. We have also had some really special moments, and today was one of them. I am just so happy for the kids. They put so much into it. They get criticized, they keep fighting. They deserve to have moments like this.

“Todd Peterson deserves to have moments like this, the whole team does. They invest so much. For them to taste the fruit of victory, and for it to have such an impact on their lives is amazing. These are life lessons they learn through competition. I am just really happy for them.”

South Carolina reliever John Gilreath (0-1), the fifth of six Gamecock pitchers, was charged with the loss as he allowed three unearned runs on one hit with one walk and one strikeout.

Gilreath retired the first two LSU hitters in the top of the 12th before rightfielder Antoine Duplantis reached on an error and first baseman Austin Bain drew a walk. Cabrera singled up the middle to score Duplantis and give the Tigers the lead – and after Gilreath was replaced on the mound by right-hander TJ Shook – Peterson lined a 1-2 pitch down the left-field line to increase LSU’s lead to three runs.

LSU opened the scoring with two runs in the top of the second inning as centerfielder Zach Watson produced an RBI single and shortstop Hal Hughes scored from third on a bases-loaded balk by South Carolina starting pitcher Adam Hill.

South Carolina narrowed the gap to 2-1 in the fourth on a sacrifice fly by catcher Hunter Taylor, and the Gamecocks tied the game in the sixth on a solo homer by second baseman Justin Row, his sixth dinger of the season.

LSU regained the lead in the eighth on a sacrifice fly by catcher Hunter Feduccia that scored Duplantis from third base when he avoided the tag by Gamecock catcher Hunter Taylor.

The Tigers took the 3-2 lead into the bottom of the ninth inning, but South Carolina sent the contest into extra innings when shortstop LT Tolbert tripled and later scored on a single by rightfielder Jacob Olson.

LSU starting pitcher Caleb Gilbert limited South Carolina to one run on two hits in 3.1 innings, before yielding the mound to Bain, who allowed one run in 2.2 innings of work. Freshman right-hander Devin Fontenot pitched a scoreless seventh inning before Peterson began his relief stint in the eighth.

In his first career at-bat at LSU, @Todd_Peterson3 does this!

TIGERS WIN! TIGERS WIN! @Todd_Peterson3 fires a strike to finish it off!

OH BABY! @Todd_Peterson3 stepped up big time for the Tigers tonight in extras!

Here us the link for all of LSU’s postgame interviews: https://t.co/xA6KeSqm8c pic.twitter.com/6hTfR7UI2j