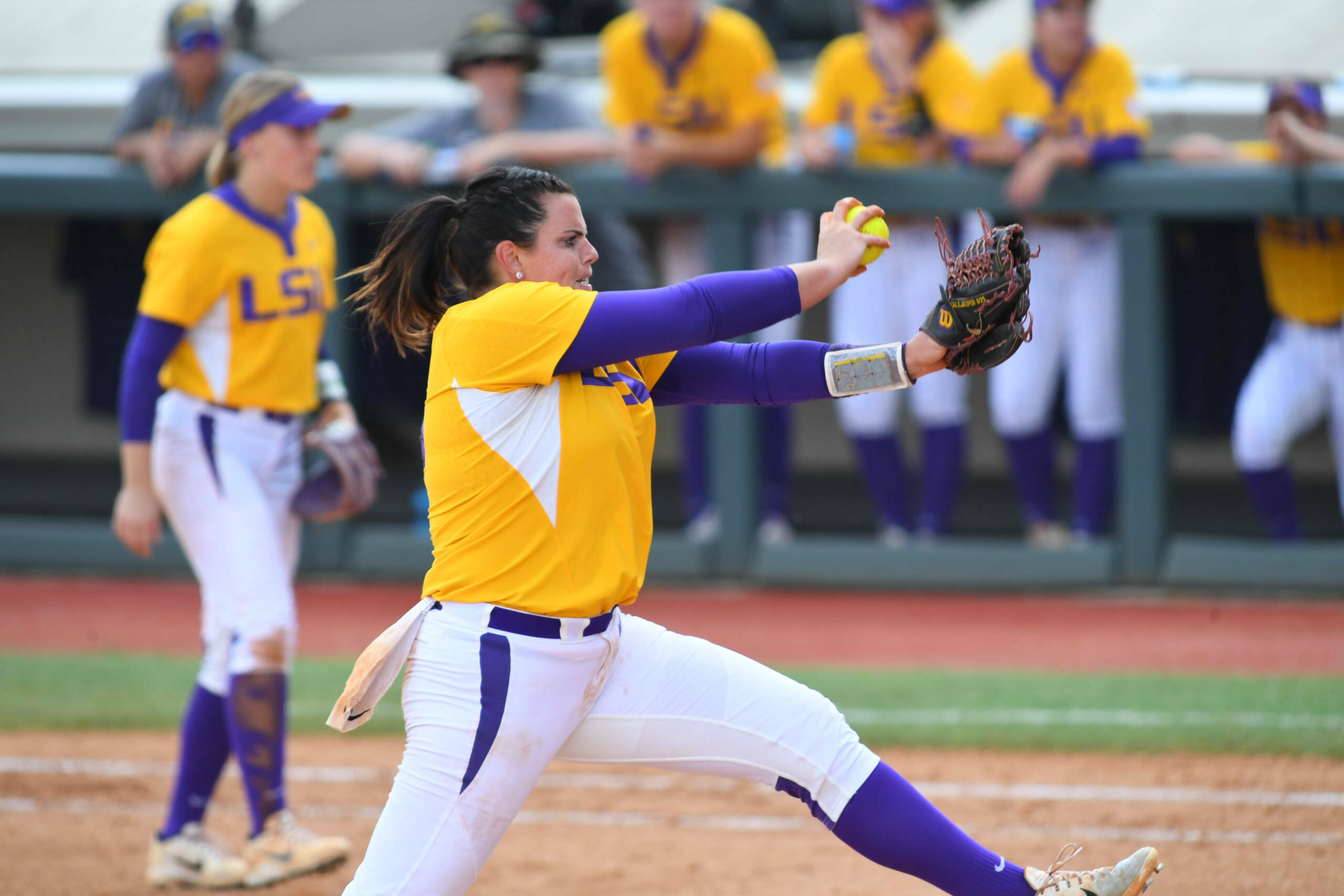 BATON ROUGE – For the fourth-straight year, the LSU softball team advances to the Super Regional in the NCAA Tournament with a 3-1 win over UL-Lafayette on Sunday afternoon in Tiger Park.

UL-Lafayette forced a game seven Sunday afternoon with a 5-4 extra innings victory over the Tigers. LSU is now 44-15 on the year while UL-Lafayette is 41-16.

The Tigers advance to face Florida State in the best-of-three NCAA Super Regional round starting Friday in Tallahassee, Fla. Game 1 is set for 6 p.m. CT (ESPNU) followed by game 2 on Saturday at 4 p.m. CT (ESPN2). If necessary, Sunday’s game 3 would start at 2 p.m. CT on ESPNU.

It was a pitcher’s duel until the top of the fourth inning when Amanda Doyle drove in Taryn Antoine from third with a single, giving the Tigers a 1-0 lead.

Two batters later, Michaela Schlattman would bring Doyle home with a two-run dinger over the left-field wall to give LSU a 3-0 advantage.

LSU would add to their lead in the top of the sixth inning after Doyle hit a sacrifice fly ball to left field to bring in Antoine, extending their lead to 4-0.

UL-Lafayette was able to get on the board in the bottom of the sixth inning, after a two out single to center field drove in a runner from second base, cutting the LSU lead to 4-1. They would later score three more runs after a bases loaded double, tying the game at four apiece.

In the bottom of the 10th inning, UL-Lafayette then hit a walk-off single up the middle to drive in the runner from second to win the game, 5-4, and force a game seven in the Baton Rouge Regional.

Carley Hoover and Allie Walljasper had a combined effort in the 10-inning game, striking out four. Walljasper picked up the loss, her sixth of the season.

The game was scoreless until the bottom of the fifth inning where Amber Serrett hit a screaming triple to the left-field wall to lead off the inning. She would later be driven in with a single by Sydney Springfield who came in as a pinch hitter to put the Tigers up, 1-0.

UL-Lafayette would answer in the top of the sixth inning with a fielder’s choice that brought in a runner from third to tie the game at one apiece.

In the bottom of the sixth inning, Michaela Schlattman drove in Shemiah Sanchez from first with a double to right-center field to put the Tigers up, 2-1. Serrett then drove in Schlattman on a fielder’s choice to extend their lead to 3-1.

Allie Walljasper pitched a complete game, allowing only three hits, and striking out two and picking up her 18th win of the season to improve to 18-6 on the season.

OPENING STATEMENT:
COACH TORINA: What a tough team. Quality program. Year in, year out they just bring great athletes. I thought everyone in this tournament was a very tough opponent and did an excellent job. Our team showed the resiliency it’s shown over the past four years here today. You know, I think that they just continue to fight. They continue to play down to the last out and there’s no quit in them. So I’m really proud of the type of teams we continue to put on the field. I’m proud of the senior class and all they’ve accomplished here. And I think it’s amazing what they have done with this program and just continuing to push the bar. This being their fourth Super Regional and their time here is a pretty amazing accomplishment and I’m just really proud of what this team has done.

ALLIE, TO COME INTO THE SITUATION YOU WERE IN, THAT FIRST GAME, GO THE ENTIRE SECOND GAME, HOW DO YOU FEEL AT THIS POINT AND EVERYTHING YOU KIND YOU WENT THROUGH?
ALLIE WALLJASPER: Our defense worked great behind us, and they just really were super gritty behind me and Carley (Hoover), too. It was a really fun outing. We’re called the Fighting Tigers for a reason and we fight until the very last out we possibly can get. We just fought until the very last out. And so that’s the result.

SYDNEY, WAS THAT YOUR FIRST AT-BAT OF THE WHOLE REGIONAL AND WHAT WERE YOU THINKING?
SYDNEY SPRINGFIELD: Yes, honestly, I wasn’t really thinking about anything. Like I didn’t even go up with Evo shield. I just went up there and said I just need to go hit. The moment was just so cool just because of (shortstop) Amber Serrett. She works her butt off just for every single moment she gets. She works so hard. And it was so easy for me to come in there because of what she did and everyone in the dugout just pouring their hearts out. So it was a cool moment.

CARLEY, TALK ABOUT YOUR FIRST START IN TWO AND A HALF, THREE WEEKS? AND HOW YOU FELT OUT THERE AS THE GAME WENT ON?
CARLEY HOOVER: I think overall the support of my coaches and teammates, everything, struggling with an injury the past couple of weeks I felt personally confident going into that game. Obviously I kept postseason last year in the back of my mind, too, stepping on the mound. And the energy that my teammates bring to the field, every time we step out there, just like keeps you going no matter what. I’m sure Allie can say the same thing. It’s just a really awesome moment to finish in Tiger Park like that.

BETH, IS THIS JUST YOUR STRONG SUIT? THESE CLOSE, DOWN-TO-THE-WIRE GAMES AND EVERYTHING YOU’VE ACCOMPLISHED AT THIS POINT IN THE SEASON REALLY HELPED Y’ALL IN THE END, DO YOU THINK THAT?
TORINA: Yeah, I think our kids understand how to win a lot of different ways. They understand how to win in a lot of different situations. And this team, ever since these guys that are seniors got here, they have this weird knack for continuing to play no matter if their back’s against the wall or no matter what the situation, I think there’s crazy elimination stats about this team and what they’ve accomplished but they’re fearless. They’re the Fighting Tigers. They don’t back down, and they just continue to play and play big no matter what situation it is.

IT APPEARED YOU HAD A VERY ATTACK MODE AGAINST SUMMER ELLYSON MAYBE EARLY ON IN THE COUNT, WAS THAT THE GAME PLAN?
TORINA: I think hitting her early, we had seen some other teams have some success hitting her early. I think we tried about everything you could possibly try in all the innings today. I think we had a lot of different thoughts as the game went on and tried a lot of different things. She did a great job. She’s really talented. We watched film. It was hard to see her find spots where she was even giving up runs. She had a great year. She had a great season for her team. What she did today really should be commended. She had a great day and did a great thing for her team.

LONG DAY, LONG WEEKEND, WHAT KIND OF AN EMOTIONAL REGIONAL WIN IS THIS LIKE FOR THE TEAM GOING FORWARD?
TORINA: That’s what they told me, they wanted some extra live at-bats today to get them ready for the weekend. I thought that was a great response. I think just continuing to give them confidence in themselves and what they can accomplish. I think playing the extra game maybe in the long run keeps them confident, helps them understand they can fight and fight through a lot of different situations.

MOVING FORWARD, IT’S OBVIOUSLY REALLY EXCITING, BUT WHAT ARE YOUR THOUGHTS LOOKING FORWARD TO NEXT WEEKEND?
TORINA: Florida State is a really good team. I don’t know much about them. I have not followed them that closely this year. Obviously, I know some of the ins and outs. I know they have two really good pitchers, Kylee Hanson and Meghan King, I know they’ll do a lot of things well. They’ll be well coached. The one thing going back it’s a place you’re familiar with, so we’ve been there before. We know the places we like to eat. We know the field and where we’re going to warm up. All that stuff, a little bit of familiarity, I guess I can say that’s maybe the one thing I like about going to the same place. And they’re always tough. I’m sure there’s going to be a lot of emotion in this matchup since it’s the same thing over again.

WHAT KIND OF GUTS DID IT TAKE TO SEND SHEMIAH SANCHEZ HOME THERE COMING FROM FIRST, AND HOW MANY PEOPLE ON THIS TEAM DO YOU THINK WOULD HAVE GOTTEN WAVED IN THAT SITUATION FOR THAT CLOSE PLAY?
TORINA: I think a lot of them. I think when it’s a tie score it’s easier to be aggressive right there. If we were down, it’s probably a different decision, but when it’s a tie score, I think you get to be a little bit more aggressive. You get to try to force them to make that throw and force them to throw us out. I’m glad it worked in our favor.

>> With the win, LSU will advance to its seventh Super Regional in program history.

>> This series marks the fourth time that LSU has beaten UL-Lafayette to advance to a Super Regional.
>> LSU is now 35-4 at home this season, which is the second best record at home in program history.

>> LSU managed 13 hits between the two games with Griggs, Sanchez, and Schlattman leading the charge with two apiece. Andrews, Antoine, Doyle, and Sunseri each had one.

LSU will travel to Tallahassee for their Super Regional matchup against Florida State. The date and time of the series is currently TBA.