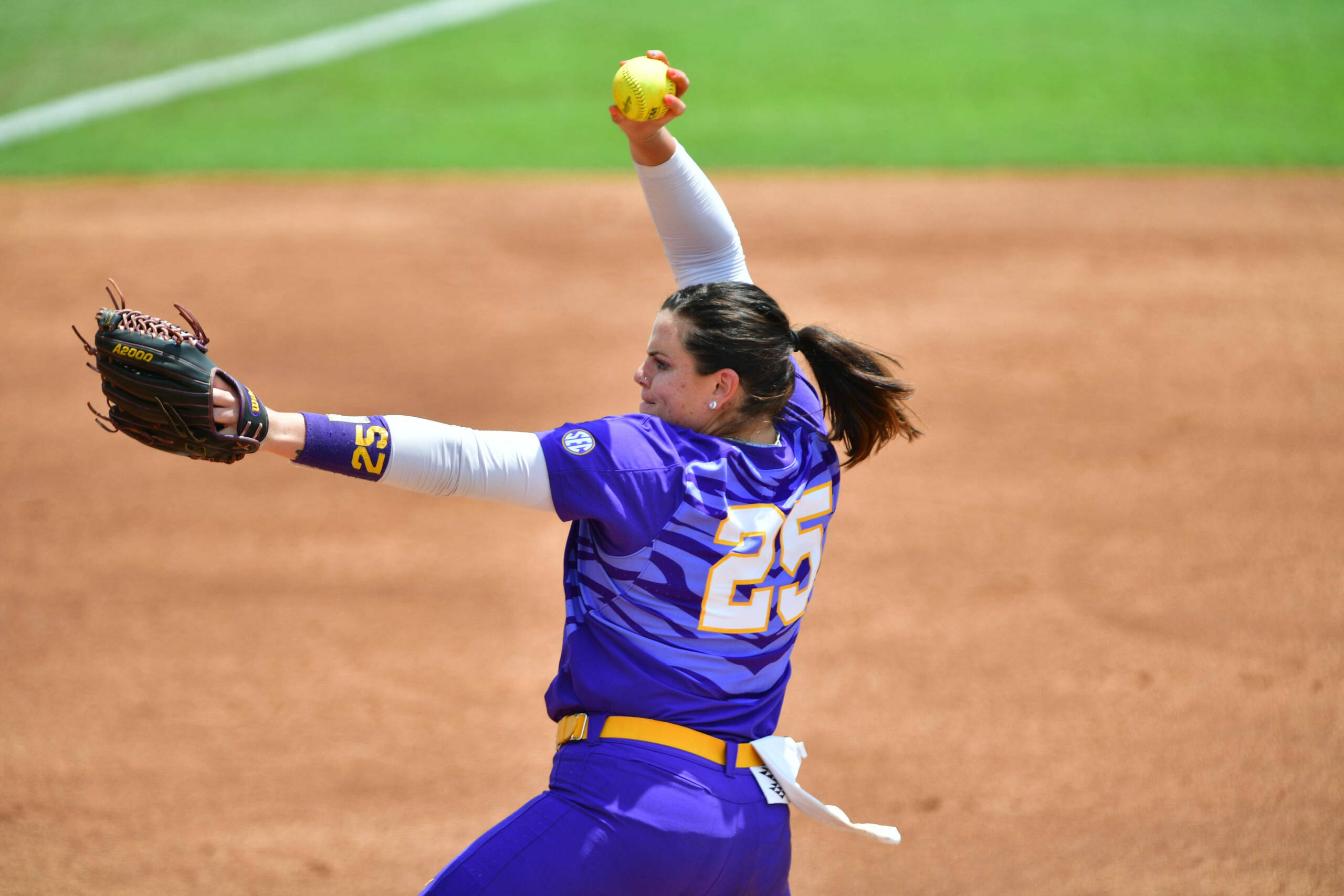 BATON ROUGE — The LSU softball team shut out the Houston Cougars, 1-0 in game three of the Baton Rouge Regional in Tiger Park on Saturday afternoon. With the win, LSU improves to 43-14 and will move on to the regional championship on Sunday at 1 p.m. Houston falls to 37-21 on the year.

It was a pitcher’s duel throughout most of the game until the top of the fifth inning where Amber Serrett drove in Michaela Schlattman from first base with a double to right field, giving the Tigers the 1-0 lead.

Houston had chances to score, but Allie Walljasper and the Tiger defense held strong, stranding seven Cougars on base.

Walljasper shut out the Houston bats, pitching a complete-game while tallying seven strike outs and picking up her 17th win of the season. It was the fourth shut out of her carreer in NCAA Tournament play, tying Britni Sneed for most in program history.

OPENING STATEMENT:
TORINA: I thought our team did a good job today of battling. Most important thing is we scored one more than them. That’s the key, right. So our kids did a good job battling. Got a really solid performance on the mound from Allie (Walljasper). She was really tough today. We saw a really good Houston team and I think it’s a great win for our team.

YOU’VE NEVER BEEN ONE TO GIVE UP A TON OF RUNS BUT THE LAST MONTH OR SO, YOU HAVEN’T HAD A GAME WHERE YOU’VE GIVEN UP MULTIPLE RUNS. WHAT’S THIS BACK STRETCH OF THE SEASON BEEN LIKE FOR YOU?
ALLIE WALLJASPER: A lot of credit goes to my defense. They have been fantastic behind me and pumping me up the entire time. I’m just going out there trying to throw quality pitches and my defense has my back the entire time.

ALL YEAR, THESE TIGHT GAMES. IS THIS WHERE YOU’RE MOST COMFORTABLE AT THIS POINT?
WALLJASPER: Yes, our offense is just chipping away and as a team we’re playing one out at a time, getting to the last inning. It’s important for us to keep going, keep waiting for our opponents and keep playing one pitch at a time.

AMBER, OFFENSE COULDN’T GET MUCH OFF THEIR PITCHER ALL DAY. HOW MUCH OF A RELIEF WAS IT TO SEE ONE FALL IN?
AMBER SERRETT: It’s nice. We had a lot of hard hits, but they were just straight at them. Sometimes we just need that one that falls. I think it was a great team win. We didn’t have that one big hit but we had a lot of hits strung together.

YOU GUYS HAVE HAD 18 ONE-RUN GAMES THIS YEAR, BUT THIS TIME OF YEAR, WHEN THE COMPETITION GETS BETTER AND THERE’S A LOT OF GOOD PITCHERS TODAY, DOES IT HELP YOU GUYS THAT YOU’RE USED TO SO MANY GAMES CLOSE GAMES?
SERRETT: Definitely in the SEC, every weekend is like the postseason to us. Having that experience, really it helps in the postseason and our mentality, knowing we’re going to have to play as a team and win together.

MICHAELA, CAN YOU TAKE US THROUGH THE PLAY THAT AMBER GET THE HIT AND YOU COME ALL THE WAY AROUND FROM FIRST?
MICHAELA SCHLATTMAN: I knew there were two outs and I saw the ball up in the air and (LSU Assistant Coach) Lindsay (Leftwich) was yelling, “Fair! Fair!” So I was running as fast as I could. I saw Coach (Torina) give me the wave. She was running me as hard as she possibly could and I was just taking off. I was just trying to get in there. Like we said, didn’t have to be a big hit but just string something together.

ALLIE’S BACK HALF OF THE SEASON HAS BEEN SO DOMINANT. WHAT’S IT BEEN LIKE TO SEE HER CONTROL GAMES THE WAY SHE HAS?
TORINA: I think she’s one of the best in the game. She has so many weapons and she’s able to keep people off balance so well. I didn’t believe our defense was perfect today but they have played really well behind her and backed her up, and she just continues to be so efficient. I mean, 76 pitches today is unreal. You know, she just does a great job of changing speeds, doing her job and using her defense, which is one of our strengths.

ALL THESE ONE-RUN GAMES, IT’S GOT TO BE TOUGH ON THE COACH.
TORINA: Well, I can tell you the only ones counting one-run games are you guys. We’re counting wins. We just want to win games and we don’t care how we do it. I think the key to this team has been pitching and defense all year. There’s no spot where this team is uncomfortable. We don’t care whether we score 10 more than them or one more than them. We are taking wins.

YOU GUYS HAVE A GREAT TRACK RECORD IN THE POST-SEASON, AND THE FACT THAT YOU’RE USED TO A LOT OF PRESSURIZED SITUATIONS, WHAT DOES THAT DO FOR YOU THIS TIME OF YEAR, IF ANYTHING?
TORINA: I think of all our abilities, the experience of being here is probably the one that’s most valuable to us right now. We had a lot of extra-inning games this year and a lot of tough spots and our kids have fought through it and battled through it. Big key this time of year is details, and this is the most detailed team I’ve ever had. They clean-up buses and they hang up uniforms and they are good in the classrooms. This team is the most attention-to-detail group I’ve ever been around. The fact that they do small things and find ways to win doesn’t surprise me one bit. They are experienced and they have been here. It’s tough to beat that level of experience.

>> This game marks the 22nd game in which LSU was able to shut out their opponent in NCAA Tournament play.

>> It is Walljasper’s fourth shutout in NCAA Tournament play, which ties the program high set by Britni Sneed. The shutout was also her 22nd in her career and her seventh on the season.

>> The Tiger offense managed four hits in the game with Schlattman leading the charge with two. Serrett and Taryn Antoine each had one.

Next up, LSU will play in the regional championship on Sunday, May 20th at 1 p.m. CT in Tiger Park against a team that is currently TBD. The game will air live online on WatchESPN.