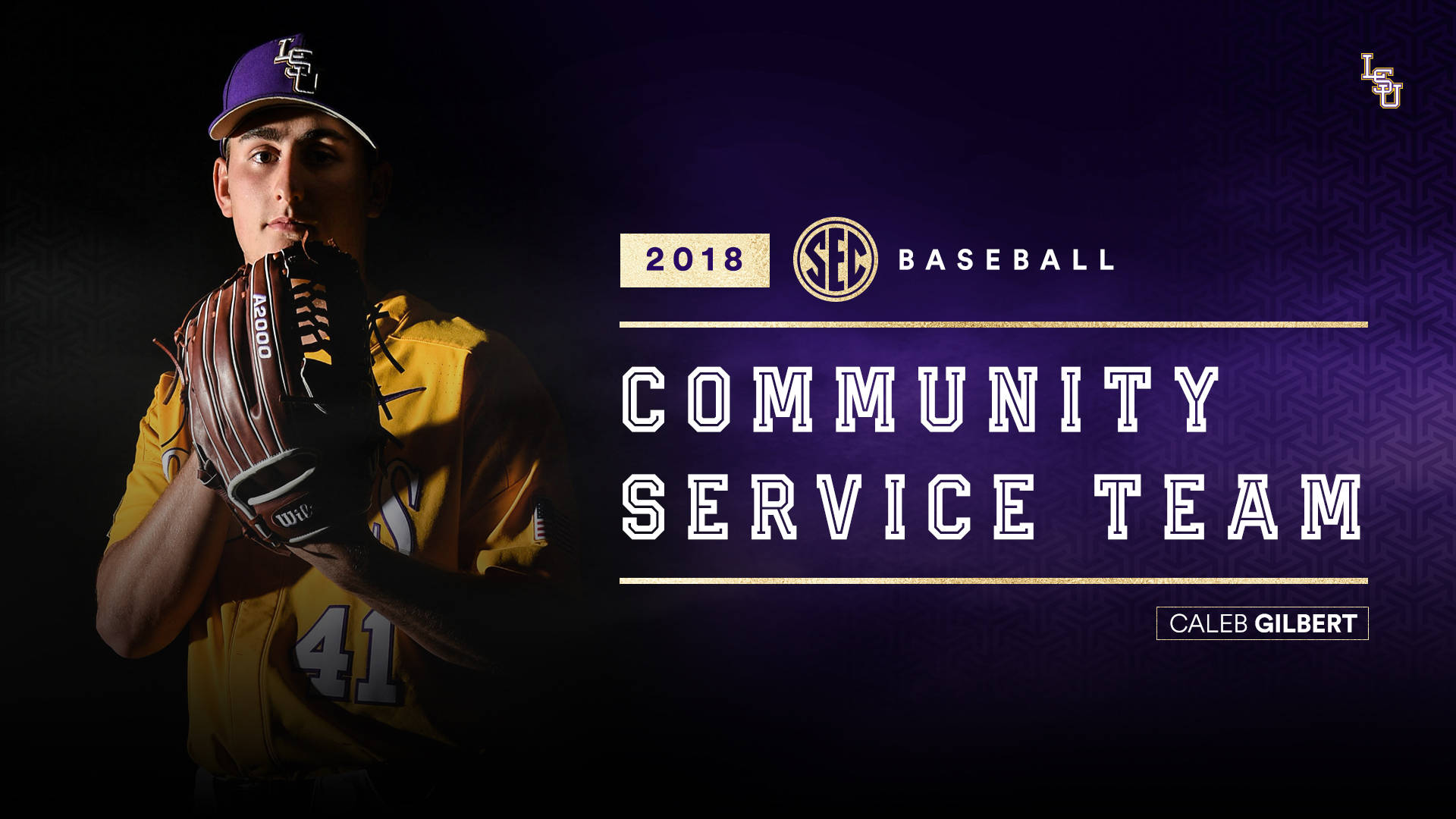 Gilbert, a native of Hoover, Ala., has been one of the leaders of the baseball program’s outstanding community service effort for the past season. He has been significantly involved with the Live 2 Play program at the Baton Rouge YMCA, in which volunteers go into underprivileged neighborhoods and play various sports with the kids in local parks and gymnasiums. The volunteers build relationships with the children and are able provide inspiration through their interactions.

Gilbert has also worked as an instructor at youth baseball clinics, and he participated in LSU’s annual Halloween Boo-zar, where student-athletes distribute candy to children in the Baton Rouge community.

He has engaged in children’s hospital visits to lift the spirits of patients, and he participated in Thanksgiving with the Tigers, a program in which LSU student-athletes deliver food to families in need.

Following are the other members of the 2018 SEC Baseball Community Service Team:

Alabama – Cobie Vance, Jr., 3B, Fayetteville, N.C.
During his time in Tuscaloosa, Vance has been one of the top contributors in the community for the Alabama baseball program. The junior has put in double-digit volunteer hours while with the Crimson Tide and has made a consistent effort to give his free time to service efforts. Over his last three years, Vance has taken part in many different volunteer opportunities, highlighted by his work with the local schools. The junior has made an effort to speak with and read to children while also taking part in special holiday celebrations at various schools. Vance has also been an annual participant in the Alabama Athletics Department’s ‘Halloween Extravaganza’ inside the Hank Crisp Indoor Facility. Each season, UA Athletics hosts the event to allow youth to interact with the University’s student-athletes from all sports and take part in sport-specific mini-games while also trick-or-treating in a safe and controlled environment. Perhaps one of the most significant volunteer opportunities for him was his time helping out the High Socks for Hope charity during Thanksgiving. Vance, the son of a retired United States Army Sergeant Major, along with other members of the baseball team packed boxes of food for Thanksgiving meals that were delivered to the local veterans during the holiday.

Arkansas – Grant Koch, Jr., C, Fayetteville, Ark.
Miracle League of Arkansas – Helped play baseball and be a buddy with kids that have mental and physical disabilities … Attended the Book Hogs kickoff at Vandergriff Elementary School in Fayetteville; Book Hogs is a program through Arkansas Athletics that encourages local kids to read more and make reading fun … Arkansas Baseball Toy Drive – Helps the baseball team raise money for local kids to help buy Christmas toys each year … Signed autographs for two hours at the Meet the Razorbacks Day at the Northwest Arkansas Mall at the beginning of the season.

Auburn – Luke Jarvis, Sr., 2B, San Diego, Calif.
A strong representative of Auburn baseball, Luke has also made himself recognizable in the community through a couple of different community service projects. He is active in volunteering for the Beat Bama Food Drive, but his biggest and most influential project involves traveling to Dean Road Elementary and reading to aloud to the first grade class. He started this as a part of World Read Aloud Day and has continued throughout the season. The class enjoyed it and Luke so much that they made a trip to Plainsman Park and got the chance to meet with Luke on the field postgame.

Florida – Nick Horvath, Sr., OF, Jupiter, Fla.
Nick Horvath has completed nearly 50 hours of community service as part of the Goodwill Gators program at UF. The majority of his volunteer work has come at P.K. Yonge school, where he mentors and interacts with students. In addition, he has made hospital visits at UF Health Pediatrics and assisted with the annual Climb for Cancer event at UF. He also helps with the Gator Tracks program, which provides shoes to children in need in the Gainesville area.

Mississippi State – Hunter Vansau, Jr., OF, Crawford, Texas
Since the start of the fall of 2017, has recorded 21 service hours across 13 different events … Spent the 2017-18 academic year serving as a classroom assistant at MSU’s TK Martin Center for Technology and Disability … During the fall season, spent time volunteering at Batson’s Childrens Hospital in Jackson, Mississippi … Is an active Student-Athlete Advisory Committee member, along with being involved in Mississippi State’s M-Club (community service club for MSU varsity letter winners) … MSU’s 2018 Newsom Award recipient for baseball, an award that honors academic excellence, personal development, community service and athletic success.

Missouri – Nolan Gromacki, Sr., RHP, Smithville, Mo.
Gromacki served as SAAC President, as well as being tapped into Mizzou’s prestigious QEBH secret society in 2017 (QEBH is the oldest of six secret honor societies at MU and members are selected based upon selfless dedication to the University, excellence in personal character and leadership achievements in the community) and followed that with another great year in the community in 2018. This is the third consecutive year that Gromacki has been named to the All-SEC Community Service Team, honoring his inspirational efforts by participating in many service opportunities. He has spearheaded the “It’s On Us Night” theme night at Taylor Stadium, partnering with campus to raise awareness and help prevent sexual violence on college campuses across the nation. It was the season’s best-attended Friday night game last year and the theme night helped set Mizzou’s midweek attendance record in 2018, a crowd largely made up of Mizzou’s student-athlete community. His work with the campus student government and campus administration has helped push a bill through the Missouri House to expand curriculum in Missouri school about consent through sexual education. His involvement with the organization was also recognized by the SEC as part of the “I Am the SEC” campaign. It’s On Us is a national organization that aims to change the culture when it comes to tolerance for sexual assault. Its principles are to recognize that non-consensual sex is sexual assault, to identify situations in which sexual assault may occur, to intervene in situations where consent has not or cannot be given, and to create an environment in which sexual assault is unacceptable and survivors are supported. Gromacki led all Mizzou Baseball players in community service hours this year and has volunteered his time to a variety of different organizations and causes, including Mizzou Moves – an organization of Mizzou athletes dedicated to getting young kids up, moving and active. A senior mechanical engineering major as well, he was one of 19 male Mizzou athletes selected to the Tiger Leadership Institute during his Mizzou tenure, a leadership development program designed to aid in shaping Mizzou student athletes into productive leaders while they are on campus, as well preparing them to be effective leaders after graduation. The program draws on the theory of authentic leadership and the UM Leadership Competency Model to assist student athletes in identity development, discovering their authentic leadership style, and how to best impact, lead and empower those around them.

South Carolina – Jonah Bride, Sr., 3B, Owasso, Okla.
This past fall, Jonah participated in a pair of community service projects that connected the players to young kids in Richland and Lexington counties. He helped out at the Miracle League, which is a program of the Columbia Parks and Recreation department. The Miracle League “is dedicated to promoting the health and well-being of individuals with disabilities while educating the public and promoting a greater understanding of matters concerning individuals with disabilities.” Then in November, Jonah and the team hosted the Chapin Screaming Eagles at Founders Park, playing a game against the Gamecocks. This past winter, Jonah was involved with Beads of Courage, which helps more than 60,000 children in eight countries record, tell and own their stories, using colorful beads as meaningful symbols of courage and hope along their treatment journey.

Tennessee – Richard Jackson, Jr., RHP, Atlanta, Ga.
Richard Jackson serves as a Community Service Officer for the NCAA Student-Athlete Advisory Committee and has logged approximately 40 hours of community service this spring alone. Jackson has been very involved with numerous elementary schools in East Tennessee, speaking and engaging with students in after school activities at Cedar Bluff Elementary, Pond Gap Elementary, Bearden Elementary, South Knox Elementary and the Philadelphia School. Earlier this year, Jackson participated in the MLK Day March through downtown Knoxville and volunteered at the homeless community holiday dinner. The Atlanta native spent a day with kids at the East Tennessee Children’s Hospital earlier this semester and has also been involved with the Goals for Girls program, which connects girls from different countries and backgrounds with their peers around the world to address social and health challenges through cultural exchange, service and soccer. Last year, Jackson participated in the Gatlinburg Fire community service drive to help benefit the victims of the deadly wildfires that swept through Gatlinburg and the Great Smokey Mountains in 2016. Other community service events that Jackson has been a part of during each of his three years at UT include the Knoxville Challenger League baseball game and VOLoween.

Texas A&M – Cason Sherrod, Sr., RHP, Dallas, Texas
Two-time honoree… As a student-athlete who is 53 percent deaf in both ears due to his premature birth of 2.5 months, he has been an inspiration to the children of the Brazos Valley Regional School for the Deaf volunteering at their annual picnic and field day … He is a four-year participant in the Aggies Baseball Paint-A-Thon where the team visits the home of a local resident in need to paint the exterior of the home, perform basic outdoor maintenance and landscaping … He helped the Aggies raise $65,000 the last three years for Vs. Cancer Pediatric Brain Tumor Foundation … Has a regular schedule of visits to volunteer at local elementary schools … Earned The Texas A&M Athletics Lohman Inspiration Award.

Vanderbilt – Zach King, So., RP, Spring Hill, Tenn.
Volunteered weekly during the summer and fall with a local Team IMPACT partner in Nashville, which is a national nonprofit that connects children facing serious and chronic illnesses with college athletic teams while working to form life-long bonds and life-changing outcomes … Assisted with Hurricane Harvey Drive across campus … Assisted with campus-wide Trick or Treat Initiative as well as SAAC Holiday Party with local elementary schools.