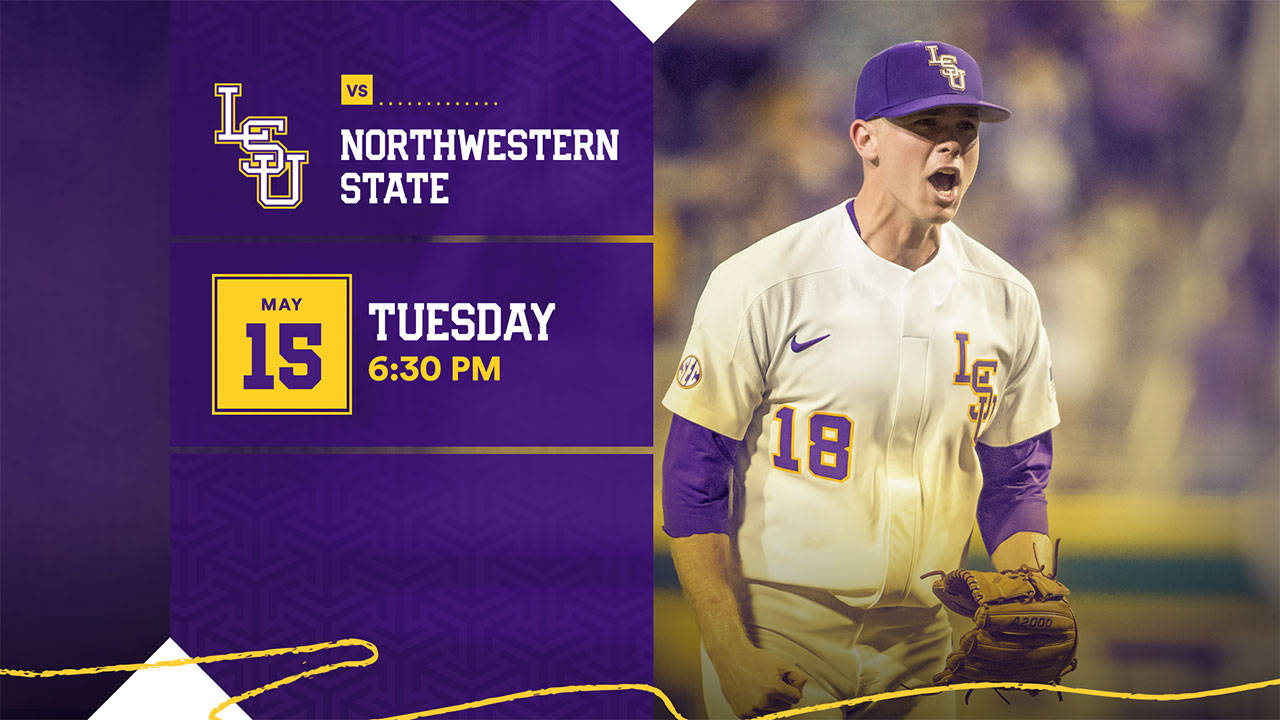 SERIES RECORD
LSU leads the series with Northwestern State, 57-11, and the Tigers have won 19 of the past 20 meetings, including a 9-3 victory over the Demons last season in Baton Rouge. The Demons’ only win in the past 20 games with LSU was a 5-2 victory on April 12, 2011, in Alex Box Stadium, Skip Bertman Field. LSU coach Paul Mainieri has a 12-1 career mark against Northwestern State.

QUOTING PAUL MAINIERI
“We’ve got a tough Northwestern State team that’s coming in and having a very good year. This is the final week of the regular season, the last of 14 weeks where we’re working hard every week to try and earn a place in the postseason. It’s a grind every year to get to this point because the parity in college baseball is greater than it’s ever been. Our team has hung in there and battled throughout the year despite facing significant adversity. Our goal right now is to get an NCAA Tournament bid, and we’ve still got some work to do to get there.”

ABOUT THE TIGERS
• LSU is 14-13 in the SEC, and the Tigers are three games out of first place in the Western Division behind Arkansas (17-10) with one week remaining in the regular season … the Tigers have clinched a berth in the SEC Tournament for the seventh consecutive season … LSU, which has won five of its last six games, appears in this week’s Collegiate Baseball Newspaper poll at No. 28 … LSU opens a three-game SEC series at Auburn on Thursday.
• With its series victory over Alabama last weekend, LSU won all five of its SEC home series in a single season for the first time since 2003 .
• Sophomore right-hander Matthew Beck will make his first start of the season and his third career start on Tuesday versus Northwestern State … Beck has 32 strikeouts in 23 relief innings this season and has limited opponents to a .181 batting average.
• All four LSU players that were honored during Sunday’s Senior Day ceremony received their college degrees last week – outfielder Beau Jordan (business), infielder Bryce Jordan (marketing), catcher Nick Coomes (business) and first baseman/pitcher Austin Bain (sports administration).
• Outfielder/designated hitter Daniel Cabrera was named SEC Freshman of the Week on Monday after he enjoyed an incredible week in leading LSU to three wins in four games, including an SEC series victory over Alabama … Cabrera hit .769 (10-for-13) in four games with two doubles, one triple, two homers and 10 RBI … in the Tigers’ series victory over Alabama, he hit .700 (7-for-10) with two doubles, one triple, one homer and six RBI … Cabrera was 2-for-2 at the plate in Sunday’s series-clinching win over the Tide with a two-run homer, one double, one walk and four RBI
• In the Tigers’ last seven games, Daniel Cabrera is hitting .667 (14-for-21) with two doubles, one triple, two homers and 13 RBI … he has raised his cumulative average to .333 and he leads LSU in RBI with 44.
• Sophomore left-hander Nick Bush defeated Alabama on Sunday, pitching a career-high six innings to earn his first victory of the season in his third start of 2018 … Bush, who has worked primarily as reliever this season, was thrust into the starting role on Sunday when scheduled starter AJ Labas was unable to pitch due to arm soreness … Bush limited Alabama to one earned run on six hits in six innings with one walk and two strikeouts, firing 87 pitches in the outing.
• Sophomore third baseman Jake Slaughter batted .462 (6-for-13) in four games last week with one double, one RBI and five runs … senior leftfielder Beau Jordan batted .438 (7-for-16) last week with one double, one homer, seven RBI and three runs.
• Freshman right-hander Devin Fontenot made two appearances in the Alabama series, allowing one run in four total innings with no walks and four strikeouts … junior right-hander Cam Sanders recorded seven strikeouts in 4.2 relief innings against Alabama on Saturday, limiting the Crimson Tide to one run on two hits.

ABOUT THE DEMONS
• Northwestern State is in fourth place in the Southland Conference standings with a 16-11 mark, trailing Sam Houston State (21-6), Southeastern Louisiana (21-9) and Central Arkansas (17-10) … the Demons conclude their regular season with a three-game SLC series at New Orleans beginning on Thursday.
• Northwestern State is batting .276 as a team with 38 home runs and 36 stolen bases in 53 attempts, and the NSU pitching staff has a cumulative 3.23 ERA.
• The Demons are led at the plate by senior infielder David Fry, who is batting .346 with 25 doubles, one triple, 11 homers and 50 RBI … senior outfielder Kwan Adkins is batting .344 with six doubles, two triples, one homer and 22 RBI.
• Northwestern State left-hander Tyler Pigott will make his second career start for the Demons – he is allowing just a .210 opponent batting average in 22.2 innings of work this season.