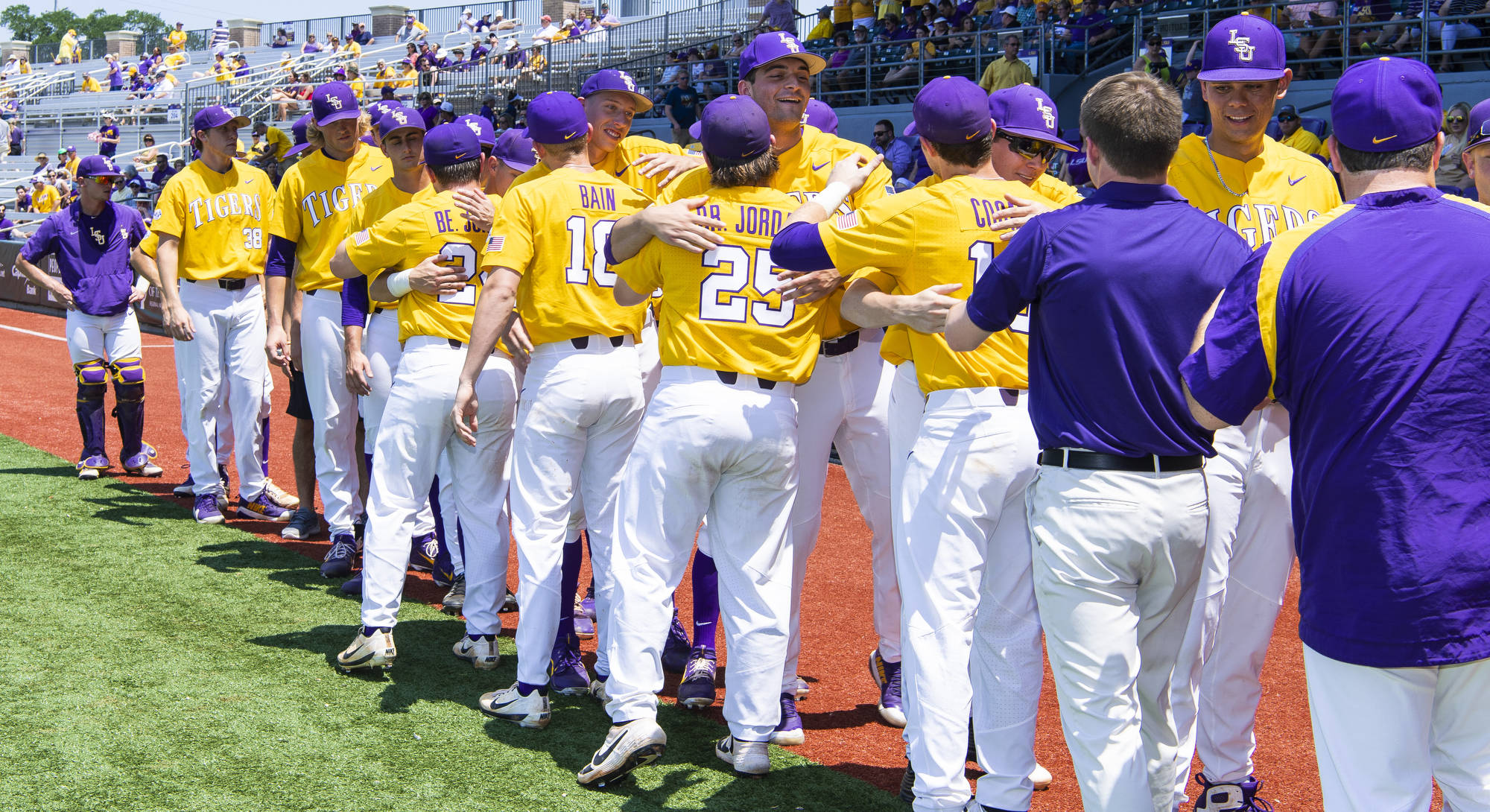 Notes on the Tigers
LSU is 14-13 in the SEC, and the Tigers are three games out of first place in the Western Division behind Arkansas (17-10) with one week remaining in the regular season … the Tigers have clinched a berth in the SEC Tournament for the seventh consecutive season … LSU, which has won five of its last six games, appears in this week’s Collegiate Baseball Newspaper poll at No. 28 … with its series victory over Alabama last weekend, LSU won all five of its SEC home series in a single season for the first time since 2003 … all four LSU players that were honored during Sunday’s Senior Day ceremony received their college degrees last week – outfielder Beau Jordan (business), infielder Bryce Jordan (marketing), catcher Nick Coomes (business) and first baseman/pitcher Austin Bain (sports administration) … freshman outfielder/designated hitter Daniel Cabrera enjoyed an incredible week in leading LSU to three wins in four games, including an SEC series victory over Alabama … Cabrera hit .769 (10-for-13) in four games with two doubles, one triple, two homers and 10 RBI … in the Tigers’ series victory over Alabama, he hit .700 (7-for-10) with two doubles, one triple, one homer and six RBI … Cabrera was 2-for-2 at the plate in Sunday’s series-clinching win over the Tide with a two-run homer, one double, one walk and four RBI … for the entire week, he posted a 1.538 slugging percentage and an .813 on-base percentage … in the Tigers’ last seven games, Cabrera is hitting .667 (14-for-21) with two doubles, one triple, two homers and 13 RBI … he has raised his cumulative average to .333 and he leads LSU in RBI with 44 … sophomore left-hander Nick Bush defeated Alabama on Sunday, pitching a career-high six innings to earn his first victory of the season in his third start of 2018 … Bush, who has worked primarily as reliever this season, was thrust into the starting role on Sunday when scheduled starter AJ Labas was unable to pitch due to arm soreness … Bush limited Alabama to one earned run on six hits in six innings with one walk and two strikeouts, firing 87 pitches in the outing … sophomore third baseman Jake Slaughter batted .462 (6-for-13) in four games last week with one double, one RBI and five runs … senior leftfielder Beau Jordan batted .438 (7-for-16) last week with one double, one homer, seven RBI and three runs … freshman right-hander Devin Fontenot made two appearances in the Alabama series, allowing one run in four total innings with no walks and four strikeouts … junior right-hander Cam Sanders recorded seven strikeouts in 4.2 relief innings against Alabama on Saturday, limiting the Crimson Tide to one run on two hits.