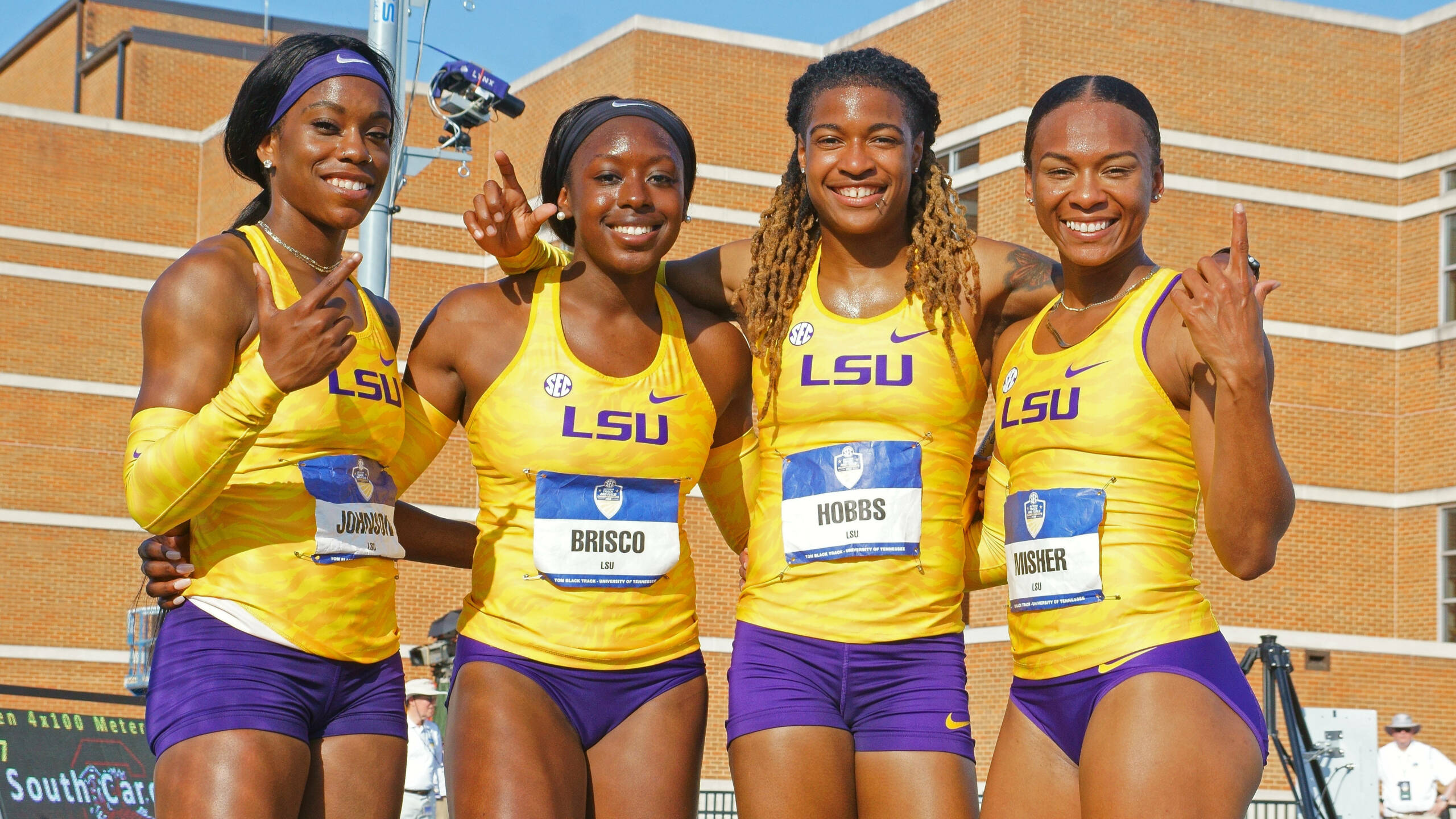 KNOXVILLE, Tenn. — The women’s 4×100 meter relay of Mikiah Brisco, Kortnei Johnson, Rachel Misher and Aleia Hobbs put together the best race in collegiate history on the final day of the SEC Championships at the Tom Black Track. The foursome circled the track in a blazing time of 42.05 of to edge the previous collegiate record of 42.12 held by LSU (2017) and Oregon (2017).

All four of those women played an influential role in LSU’s near surge to the SEC title. Entering the day with zero team points, 13 women combined to score 88 points and give Florida (91 points) a run for their money. Riding the momentum of the record-setting 4×100 meter relay, the Tigers received 18 points from both the 100 meter dash and 400 meter hurdle events.

The quartet of Hobbs, Brisco, Johnson and Cassondra Hall entered the 100 meter dash knowing the Tigers needed big points, and they delivered. For the second straight night, Hobbs set a SEC meet record lowering her freshly clocked meet record from Saturday (10.93) down to 10.92 to win her second straight SEC 100 meter dash title. With the win, she becomes the sixth woman in program history to collect back-to-back SEC titles in the 100 meter dash. Joining Hobbs in the 100 meter final, Brisco (11.07/fifth place), Johnson (11.12/sixth place) and Cassondra Hall (11.12/eighth place) combined to score the other eight points from the event.

Senior Kymber Payne led the charge in the 400 meter hurdles garnering silver with a readout of 56.11. A pair of freshmen, Jurnee Woodward (57.77) and Milan Young (58.54), both clocked personal bests on their way to fourth and sixth-place finishes, respectively. Brittley Humphrey placed seventh with a time of 59.46. Humphrey also registered a personal best in the 100 meter hurdles for the second straight day with a career-best time of 13.02 to place fifth.

The women’s high jump duo of Abby O’Donoghue and Kaitlyn Walker put together solid efforts to score 12.5 points for the Tigers. In her first career outdoor SEC meet, O’Donoghue cleared 1.80 meters (5-10.75) to place second, and Walker cleared 1.75 meters (5-8.75) to earn a tie for fourth place. Rachel Misher registered the best quarter mile of her career on the big stage with a solid time of 51.60 to garner silver.

The duo of Brisco and Johnson were a busy bunch on the final day of the SEC meet. After running the 4×100 meter relay and the 100 meter dash, the twosome grinded out a fourth and fifth-place showing in the 200 meter dash with times of 22.88 and 22.95. Ersula Farrow clocked an 800 meter run time of 2:07.66 to place sixth and earn three points for LSU.

The championship came down to the final race of the meet. Entering the 4×400 meter relay trailing Florida by half a point. The Tigers (Misher, Zakiya Denoon, Payne and Hall) put forth their best effort and clocked a season-best readout of 3:28.02 to place third in the race, one spot behind the Gators.

The men’s squad closed out the meet with 48 points to finish eighth place. The men’s 4×100 meter relay squad of Kary Vincent Jr., Renard Howell, Correion Mosby and Jaron Flournoy came together to win LSU’s third straight 4×100 meter SEC title with a time of 38.76. The 38.76 is a season best and it ranks as the second fastest in the NCAA.

The 4×400 meter relay clocked a time of 3:01.98 to close out the meet with silver. It was a season best by two seconds, ranked as the 10th fastest time in program history and ranks third nationally; the crew that put that time together was Jahnoy Thompson, Jaron Flournoy, Renard Howell and Correion Mosby.

Freshman Damion Thomas placed third in the 110 meter hurdle final with a time of 13.64. Flournoy posted a 200 meter dash time of 20.43 to place fifth and freshman JuVaughn Blake cleared a personal-best height of 2.22 meters (7-3.25) to finish fourth.