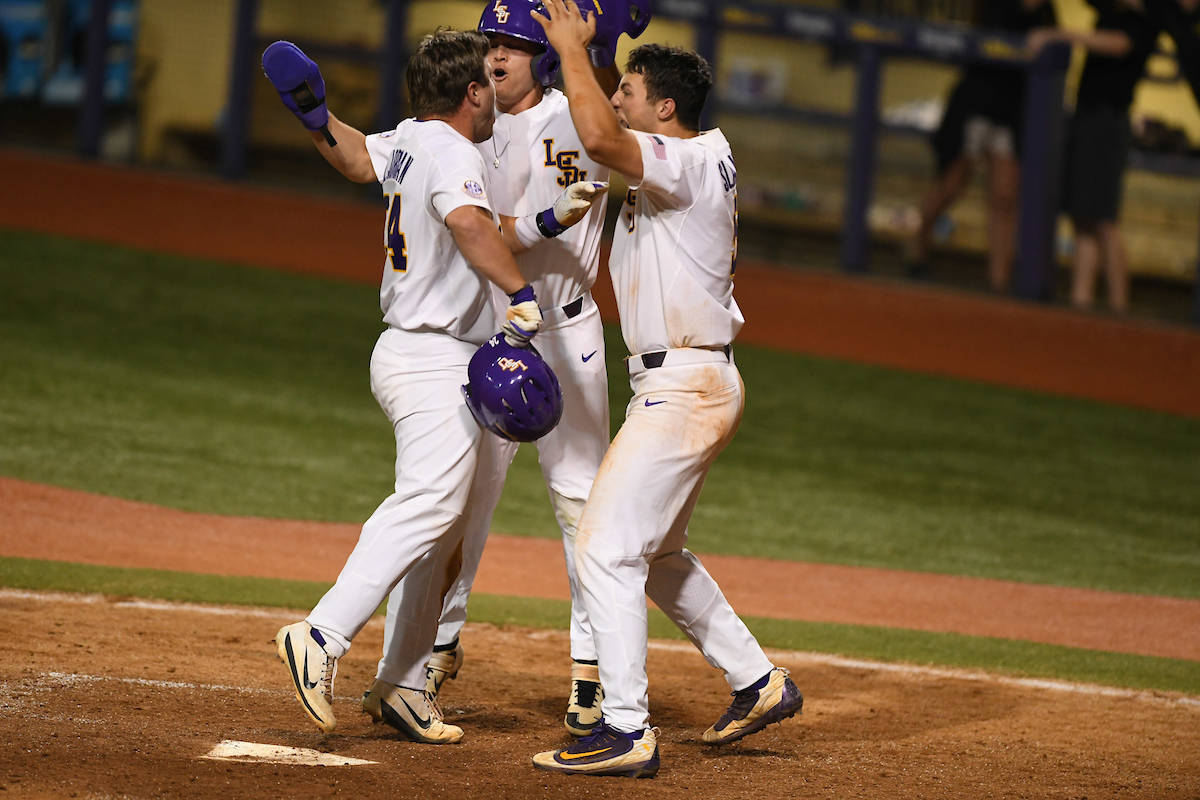 Game 2 of the series between LSU and Alabama will take place at 7 p.m. CT Saturday in “The Box”. The game will be televised by the SEC Network, and it can also be heard on affiliates of the LSU Sports Radio network. Live audio and live stats will be available at LSUsports.net.

“Our players knew how important this game was,” said LSU coach Paul Mainieri, “but we couldn’t have played any worse for the first four or five innings. Whatever could go wrong, went wrong. Give credit to Alabama for playing very well, but we also had some bad luck, and we fell behind. It felt like we were pressing a little bit, and we thought we were snakebit for the night, but this is why you play 27 outs and our players competed with every pitch.”

With Alabama holding a 5-1 lead, the momentum shifted in the Tigers’ favor in the bottom of the eighth when center fielder Zach Watson reached on a throwing error by the Crimson Tide shortstop. Back-to-back walks by catcher Hunter Feduccia and third baseman Jake Slaughter loaded the bases for pinch hitter Nick Coomes. The senior smacked a 1-0 pitch through the left side to drive in Watson.

With the count at 2-2, Jordan homered to left field to give the Tigers the 7-5 advantage. The blast was the second career grand slam for Jordan, who also hit one on April 16, 2016, at Missouri.

“This is a moment that Beau will remember for the rest of his life,” Mainieri said. “He participated in graduation ceremonies earlier today and picked up his diploma, and in his last regular-season SEC series at home, he hits a grand slam.”

John Kodros (1-1) was the pitcher of record for the Tigers, and the left-hander earned his first career win after recording the final out of the eighth inning.
The freshman turned it over to right-hander Todd Peterson, who earned his third save of the season, shutting out Alabama with only seven pitches in the top of the ninth inning.

After entering in relief of Alabama starter Sam Finnerty, Medders (0-4) was charged with the loss after giving up five runs—four earned—on one hit with three walks.

Finnerty limited the Tigers to one run on six hits, while walking three and striking out one in his 6.2 innings of work.

In the top of the second with one out and catcher Sam Praytor on first after a leadoff single, first baseman John Trousdale doubled to left field to put runners in scoring position. Shortstop Jett Manning followed with a single to right field to give Alabama the 2-0 lead.

With the bases loaded in the top of the third, the Tide increased its lead to 4-0 after left fielder Keith Holcombe singled up the middle, driving in third baseman Cobie Vance and right fielder Joe Breaux, who reached earlier in the inning after being hit by a pitch and drawing a walk, respectively.

Antoine Duplantis stood on first in the bottom of the third after a fielding error on a fly ball to left field led off the inning and left fielder Daniel Cabrera crushed a one-out double to straightaway center to cut the Alabama lead to 4-1.

LSU right-hander Devin Fontenot entered to pitch in the sixth inning and retired six consecutive batters before allowing a hit and struck out three.

With Fontenot still pitching in the top of the eighth inning, Trousdale doubled to left-center, and Manning increased the Tide’s lead to 5-1 after slapping a single to left-center.