LSU-Alabama Set for SEC Showdown at The Box 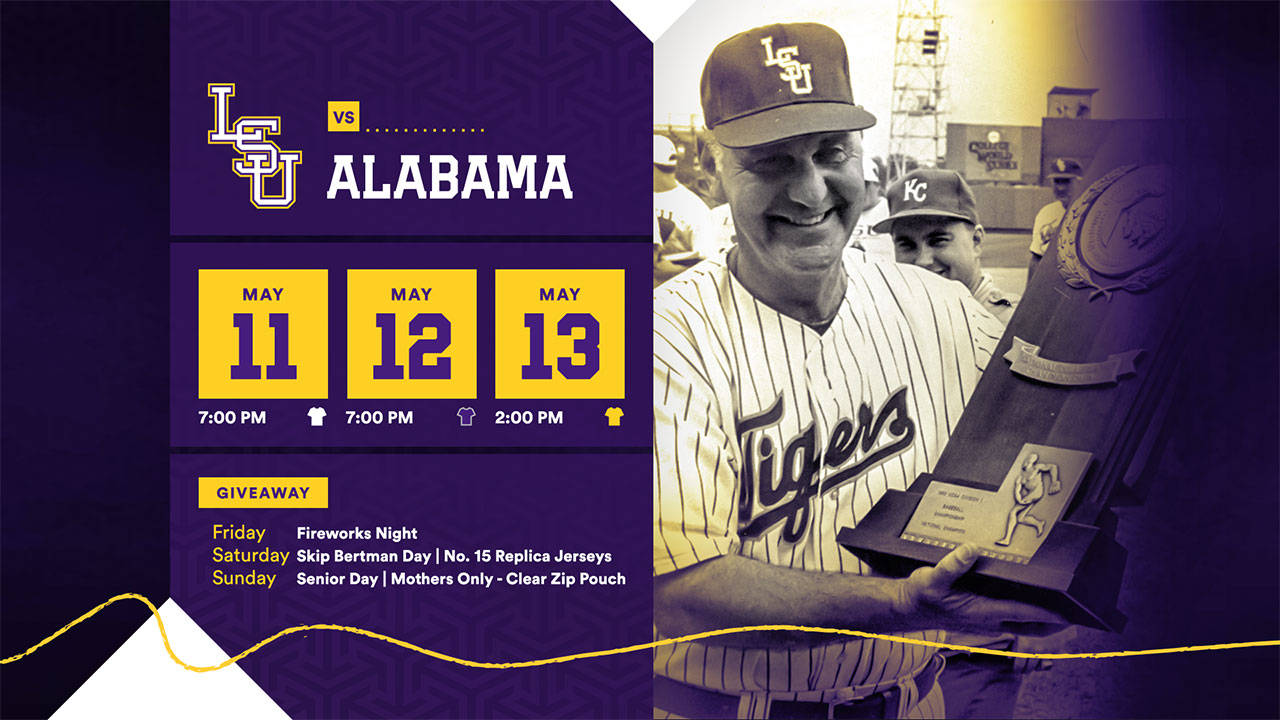 TV
Saturday’s game will be televised on the SEC Network

SERIES RECORD
Alabama leads the all-time series with LSU,196-170-3, and the first meeting between the squads occurred in 1906. LSU swept three games from the Crimson Tide last season in Tuscaloosa. LSU has won 10 of its last 13 SEC regular-season series versus the Tide — Alabama, however, posted a 2-1 series victory over LSU in its last visit to Baton Rouge in 20IES RECORD

QUOTING PAUL MAINIERI
“Our players are very excited about the weekend because they know what’s at stake when we play Alabama. Any time LSU and Alabama meet in any sport, there is a very intense environment. Brad Bohannon is doing a tremendous job in his first year as Alabama’s coach, and his players compete extremely hard for him. We’re going to have to play at our best in order to have success against them.”

ABOUT THE TIGERS
• LSU is currently 12-12 in the SEC, and the Tigers are two games out of first place in the Western Division behind Arkansas (14-10) … LSU won two of three games over the fourth-ranked Razorbacks last weekend in Alex Box Stadium, Skip Bertman Field
• Senior first baseman Austin Bain led LSU to a series victory over fourth-ranked Arkansas last weekend, batting .500 (5-for-10) in three games with two doubles, four RBI and three runs … Bain delivered the game-winning hit in Saturday’s 6-4 win over the Razorbacks, lining a two-out, two-run single in the bottom of the seventh inning to provide the go-ahead runs … he collected two doubles, one RBI and two runs in Sunday’s victory.
• Austin Bain leads the SEC in doubles with 19, and he enters the Alabama series riding a 16-game hit streak, the longest by an LSU player this season … Bain is hitting .410 (26-for-65) during the streak with nine doubles, nine runs and 17 RBI.
• LSU hit .323 (31-for-96) as a team in last weekend’s series victory over fourth-ranked Arkansas … the Tigers produced 17 runs, seven doubles and one homer against a pitching staff that is rated No. 3 in the SEC in ERA (3.50).
• Offensive highlights in last weekend’s Arkansas series were provided by DH Daniel Cabrera (4-for-8, 3 RBI), centerfielder Zach Watson (5-for-12, 2 2B, 2 RBI), leftfielder Beau Jordan (5-for-13, 1 2B, 1 HR, 1 RBI) and rightfielder Antoine Duplantis (4-for-13, 1 2B, 2 RBI).
• Junior rightfielder Antoine Duplantis is No. 4 in the SEC in base hits (70), No. 4 in steals (14) and No. 9 in batting average (.354) … sophomore right-hander Zack Hess is No. 6 in the SEC in strikeouts (85), and freshman right-hander Ma’Khail Hilliard is third in the league in wins with eight.
• Sophomore right-hander Matthew Beck earned his first career save on Sunday versus Arkansas, firing three scoreless innings and limiting the Razorbacks to no hits with one walk and three strikeouts … freshman right-hander Devin Fontenot earned his first career win on Saturday over Arkansas, firing three scoreless relief innings and allowing just one hit with one walk and two strikeouts … the three-inning outing marked the longest of his career, and he threw a career-high 46 pitches.
• Sophomore right-hander Todd Peterson earned his second save of the season on Saturday, delivering a scoreless ninth inning against Arkansas … Peterson inherited a no-out, runner on first scenario with a 2-0 count on the batter and LSU holding a 6-4 lead … he retired the batter he faced on a fly ball, then struck out the next two Arkansas hitters to end the game.

ABOUT THE CRIMSON TIDE
• Alabama is hitting .258 as a team this season with 40 home runs and 27 steals in 44 attempts. The Crimson Tide pitching staff has a 4.06 ERA. Alabama is No. 12 in the SEC in team batting average and No. 9 in the league in team ERA.
• Junior infielder Cobie Vance leads the Tide at the plate, batting .305 with 10 doubles, one triple, five homers and 24 RBI. Senior infielder Chandler Avant has three homers and a team-best 36 RBI, and junior outfielder Chandler Taylor paces Alabama with 12 home runs this season.
• Alabama is coached by first-year skipper Brad Bohannon, who most recently served as an assistant coach at Auburn in 2016-17, and he worked as an assistant at Kentucky from 2004-15.