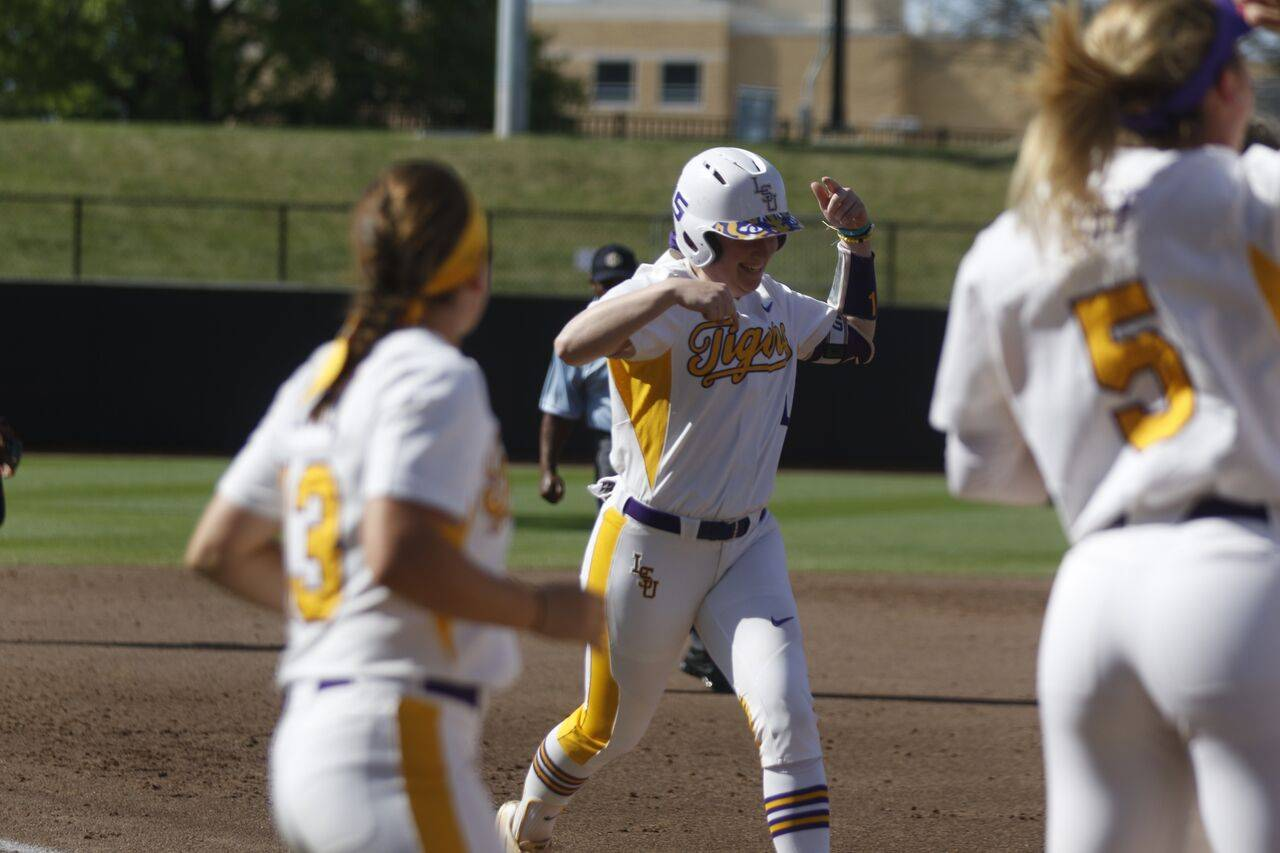 COLUMBIA, Mo. – The LSU softball team advances to the quarterfinals of the SEC Tournament after defeating the Ole Miss Rebels, 4-1 in Mizzou Softball Stadium on Wednesday afternoon. With the win, LSU improves to 41-13 on the year, while Ole Miss falls to 30-23.

The Tigers got on the board first thanks to Michaela Schlattman, who hit a grand slam over the center-field wall to score Amanda Doyle, Shelbi Sunseri, and Amber Serrett, putting the Tigers up 4-0 in the bottom of the second inning.

Ole Miss was able to get on the board in the top of the fourth after a single scored a runner on third, cutting the LSU lead to 4-1.

In the next inning, the Rebels had runners on second and third with one out, but a fly out to Emily Griggs and a fantastic throw to get the runner out at home ended the Ole Miss threat.

Allie Walljasper was sensational in the circle for the Tigers. She pitched her 14th complete game of the season, going seven innings while striking out five.

Opening Statement …
“I thought it was a solid win for the team. I thought we played great defense. I think it is tough to defend a team like Ole Miss with all their speed. I thought our team did a nice job of handling that.”

On Schlattman’s grand slam …
“Michaela has been huge for us lately. It couldn’t happen to a better person. She has worked really hard for this moment and I kind of think that she has grown into the player that she is now. She’s got game experience all season long and I think it is paying off.”

On Walljasper’s performance …
“Allie is just Allie. She is just consistent every time we put her on the mound. We know she is going to get us the win, and keep us in every ball game. I think she was able to stay down in the zone, change speeds and do what Allie does.”

On what the team will do to prepare for Tennessee …
“I think we know them well. We played them. They are on the list of teams that we want another shot at. We didn’t play them as well as we would have liked to the first time around, but I think we would like another shot at them. We will go back, watch the film and get ready.”

Opening Statement …
“We just went out there and fought until the very last inning. It was really cool for Micheala to step up in that moment. She has been working so hard, even on her off-days. She is always in there asking what she can do better. She has really stepped up her game.”

On what was working for her today …
“Just trying to hit my spots. Coach (Torina) called a great game. My defense was behind me the entire time, so that gave me a lot of confidence knowing they were making plays.”

On the level of competition at the SEC Tournament …
“The SEC is where you play someone who could win the College World Series every weekend. You just never know what you are going to get. Every team is just a great team. They will really fight until the very last inning, so it is about going out there with confidence and knowing that even if you get knocked down, you can still get up and fight.”

>> Schlattman is hitting .538 (7-for-13) with four home runs and 11 RBI in the last five games. Her four RBI in the game against Ole Miss was the fifth time an LSU player had four RBI in an SEC Tournament game.

>> LSU had six hits on the night with Schlattman and Doyle leading the charge with two each. Shemiah Sanchez and Amber Serrett each had one.

Next up, No. 5-seeded LSU will take on the No. 4 seed Tennessee Volunteers on Thursday, May 10 at 4 p.m. CT in Columbia. The game will be broadcast live on the SEC Network.