Tigers Take On McNeese Wednesday Night at The Box 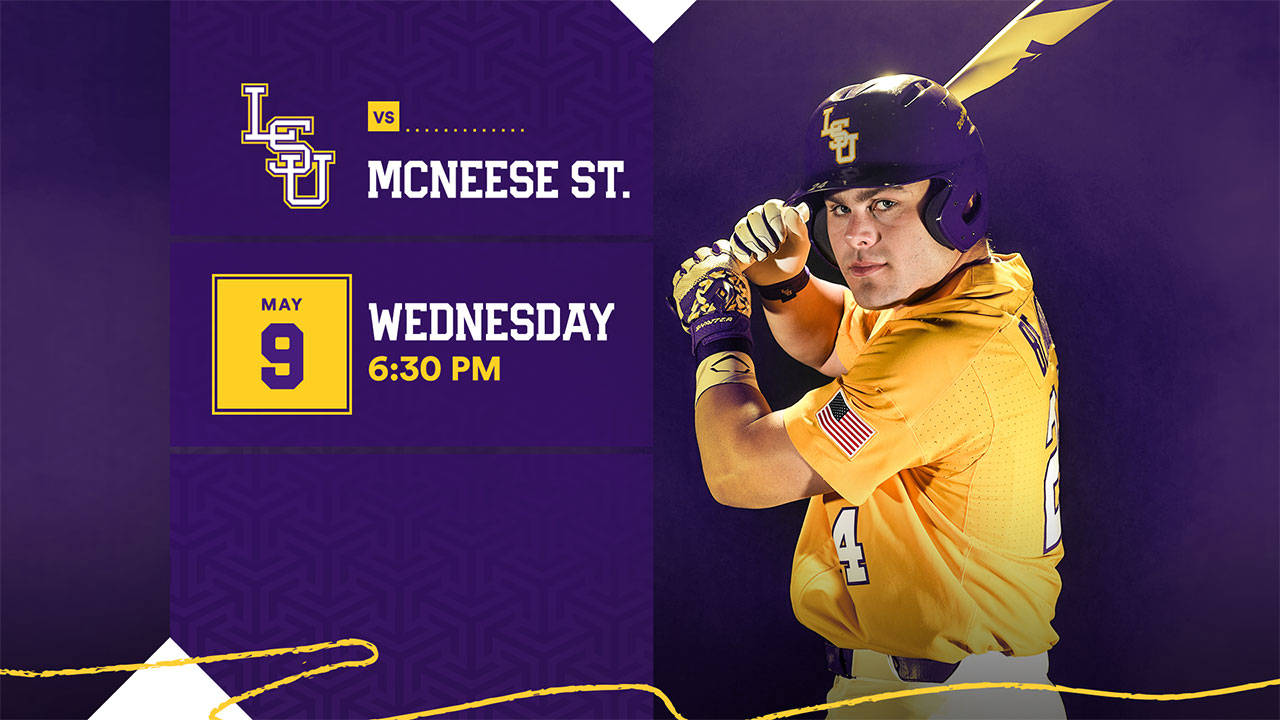 SERIES RECORD
LSU leads the overall series with McNeese State, 29-11, but the Cowboys have won the last two meetings between the schools. The Tigers had won 11 straight games over the Cowboys before McNeese defeated LSU, 7-0, in 2016 in Baton Rouge. McNeese won its second straight game over LSU last season with a 5-4 victory in Lake Charles.

QUOTING PAUL MAINIERI
“McNeese has beaten us two years in a row, so I won’t have any trouble getting the attention of our players (McNeese coach) Justin Hill has done a tremendous job there, and they have some very talented players. I’m sure they’re going to come after us with everything that they’ve got, so it’s going to be a significant challenge for us. Our guys are excited about it; we’re in our last eight games of the regular season, and we need to play well and get the job done on the field.”

ABOUT THE TIGERS
• LSU is currently 12-12 in the SEC, and the Tigers are two games out of first place in the Western Division behind Arkansas (14-10) … LSU won two of three games over the fourth-ranked Razorbacks last weekend in Alex Box Stadium, Skip Bertman Field
• Senior first baseman Austin Bain led LSU to a series victory over fourth-ranked Arkansas last weekend, batting .500 (5-for-10) in three games with two doubles, four RBI and three runs … Bain delivered the game-winning hit in Saturday’s 6-4 win over the Razorbacks, lining a two-out, two-run single in the bottom of the seventh inning to provide the go-ahead runs … he collected two doubles, one RBI and two runs in Sunday’s victory, increasing his SEC-leading doubles total to 18 … Bain also extended his current hitting streak to 15 games, the longest by an LSU player this season … Bain is hitting .410 (25-for-61) during the streak with eight doubles, eight runs and 16 RBI
• Other offensive highlights in the Arkansas series were provided by DH Daniel Cabrera (4-for-8, 3 RBI), centerfielder Zach Watson (5-for-12, 2 2B, 2 RBI), leftfielder Beau Jordan (5-for-13, 1 2B, 1 HR, 1 RBI) and rightfielder Antoine Duplantis (4-for-13, 1 2B, 2 RBI).
• Sophomore right-hander Matthew Beck earned his first career save on Sunday versus Arkansas, firing three scoreless innings and limiting the Razorbacks to no hits with one walk and three strikeouts … freshman right-hander Devin Fontenot earned his first career win on Saturday over Arkansas, firing three scoreless relief innings and allowing just one hit with one walk and two strikeouts … the three-inning outing marked the longest of his career, and he threw a career-high 46 pitches.
• Sophomore right-hander Todd Peterson earned his second save of the season on Saturday, delivering a scoreless ninth inning against Arkansas … Peterson inherited a no-out, runner on first scenario with a 2-0 count on the batter and LSU holding a 6-4 lead … he retired the batter he faced on a fly ball, then struck out the next two Arkansas hitters to end the game.

ABOUT THE COWBOYS
• McNeese is hitting .257 as a team this season with 37 home runs and 51 steals in 76 attempts. The Cowboys pitching staff has a 5.15 ERA.
• Senior infielder Joe Provenzano leads the Cowboys at the plate, batting .309 with 11 doubles, one triple, four homers and 24 RBI. Junior infielder Carson Maxwell has five homers and a team-best 32 RBI, and junior outfielder Shane Selman paces McNeese with eight home runs this season.
• McNeese is coached by former LSU pitcher Justin Hill, who played for the Tigers in 2001 and 2002. Hill, the 2017 Southland Conference Coach of the Year, is in his fifth season as the Cowboys head coach.