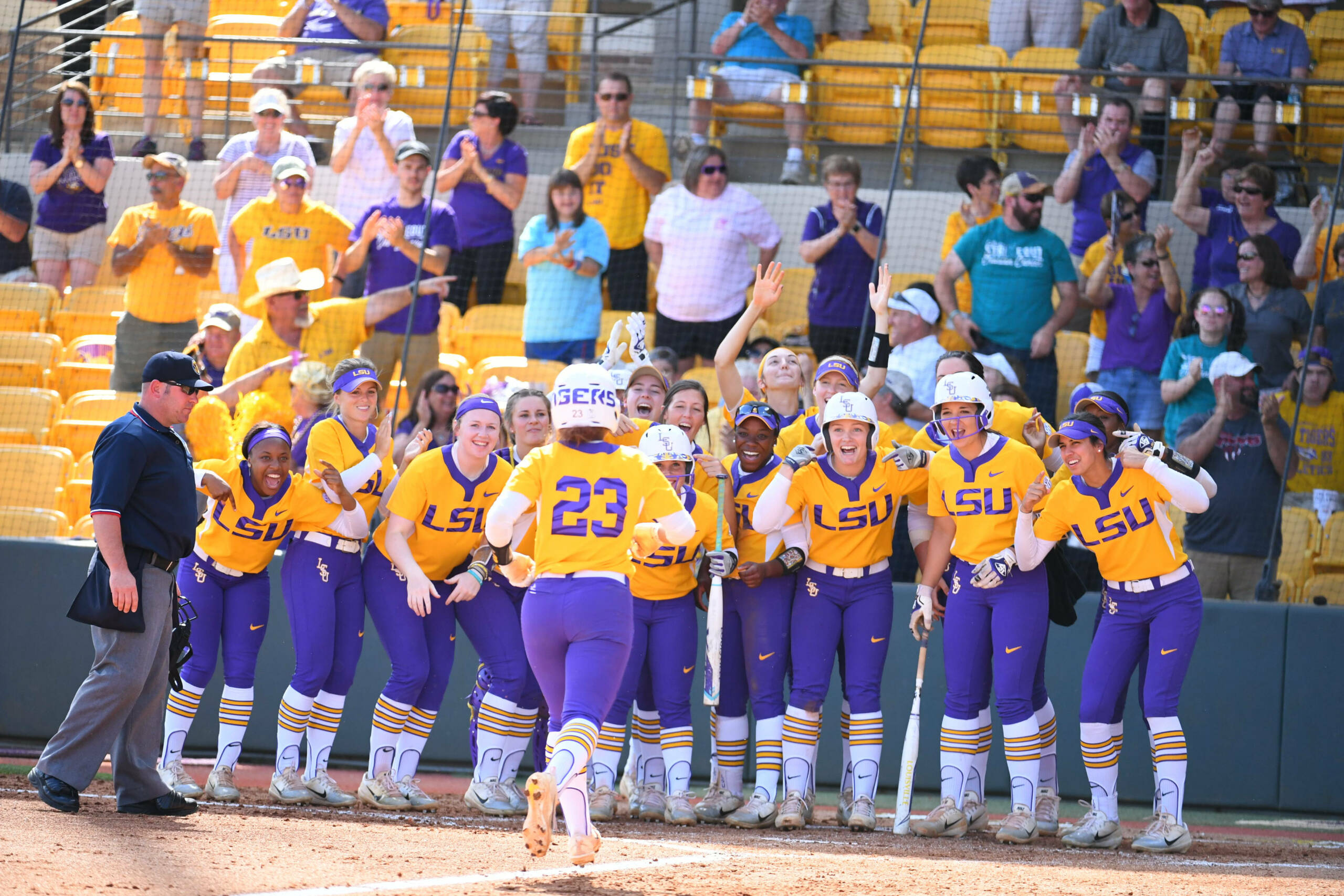 BATON ROUGE — The LSU softball team closed out the 2018 regular season with a series sweep, shutting out the Arkansas Razorbacks, 5-0 in Tiger Park Sunday afternoon. With the win, LSU improves to 40-13 and 13-10 in the SEC while Arkansas falls to 37-14 and 12-12 in conference play.

For the third time in the series, LSU got on the board first after Amber Serrett hit a blooper to left field to score Amanda Doyle, putting the Tigers up 1-0 in the bottom of the second inning.

In the very next inning, Emily Griggs hit a line drive into left field to score Taryn Antoine from second base, extending their lead to 2-0. Then Shemiah Sanchez hit a three-run home run over the left-center field wall to give the Tigers a 5-0 lead.

In her final regular season game donning the purple and gold, senior Allie Walljasper pitched a complete-game shutout, striking out seven, and earning her 15th win of the season. She was dominant in the circle, allowing only four hits and stranding seven Arkansas runners on base.

Opening statement…
“We played really well, and I was excited about how our offense performed. Allie Walljasper did a great job pitching, especially getting a shutout against a really good offense like Arkansas. It was a really big weekend for us.”

On carrying the offensive momentum into the SEC Tournament…
“I think we are very prepared. They’re doing a great job of getting prepared and swinging at the right pitches. Our staff did a wonderful job with the girls all weekend long. I think winning against a team like Arkansas will propel us and help us with our rankings.”

On playing Ole Miss again in the SEC Tournament…
“We’ve seen Ole Miss plenty this season. With all the innings we played against them here at Tiger Park, we know Ole Miss well and they know us well. We’ll be prepared for them and give them our best shot. Every team in the SEC is tough and really good. I don’t think there’s any type of easy matchup in this tournament.”

Allie Walljasper
On playing her last regular season home game as a senior…
“It was super emotional. I couldn’t thank my teammates, coaches and sports staff for giving me this amazing opportunity to pitch out here and wear LSU across my chest. This weekend was great for us seniors and hopefully we can keep going.”

>> It is now the sixth season that Beth Torina has won 40 games in her seven-year tenure at LSU.

>> LSU has now won 17-straight games against Arkansas at home. The last time they lost to Arkansas in Tiger Park was 2005.
>> LSU had eight hits on the day, with Aliyah Andrews and Serrett leading the charge with two. Griggs, Sanchez, Shelbi Sunseri, and Sydney Loupe each had one.

>> For the series, Walljasper had two complete games, going 14 innings, striking out 10 and finished with an ERA on .50.

Next up, LSU will travel to Columbia for the SEC Tournament and will take on the Ole Miss Rebels on Wednesday, May 9 at 4 p.m. CT. The game will be broadcast live on the SEC Network.