Baseball Evens Series With No. 4 Arkansas, 6-4 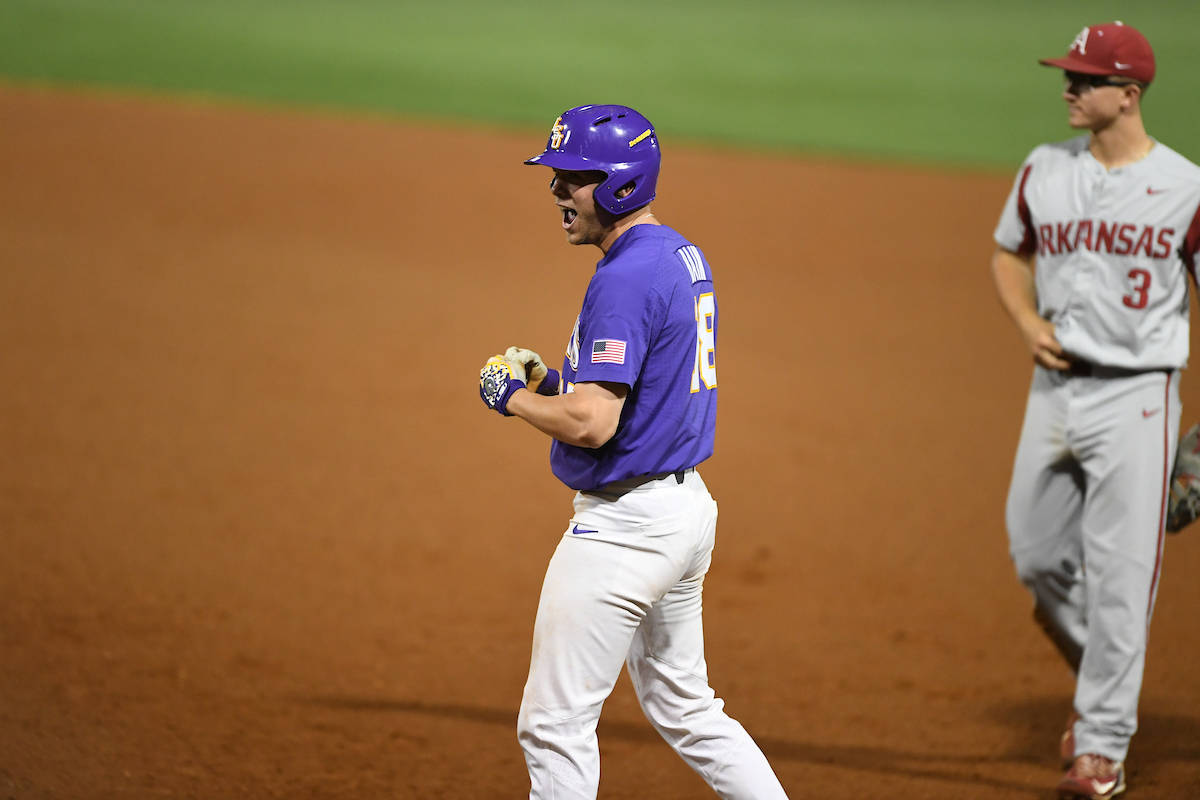 BATON ROUGE, La. — Freshman right-hander Devin Fontenot fired three shutout innings out of the bullpen and senior first baseman Austin Bain delivered the go-ahead runs with a two-RBI single in the bottom of the seventh inning to secure a 6-4 win against No. 4 Arkansas and even the series Saturday night at Alex Box Stadium, Skip Bertman Field.

The Tigers and Razorbacks will square off in the rubber match Sunday at 2 p.m. CT at “The Box”. The game will be online only through the SEC Network+, and it can also be heard on affiliates of the LSU Sports Radio network. Live audio and live stats will be available at LSUsports.net.

Freshman right-hander AJ Labas will toe the rubber for the Tigers in the series finale, and Arkansas will counter with right-hander Isaiah Campbell.

Fontenot entered the game in the sixth inning and limited the Razorbacks to one hit, walked one and struck out two in three innings to earn his first career victory.

Sophomore Todd Peterson earned his second save of the year after shutting out the Razorbacks in the ninth inning, striking out two.

“This was a crucial victory because we’ve got our backs against the wall,” said LSU coach Paul Mainieri. “We’ve had difficulty holding leads late in games, but Todd Peterson was phenomenal out of the bullpen to give us a much-needed win. We had some clutch hits early in the game, then we didn’t do anything at the plate for a while until Austin Bain‘s big hit in the seventh inning.”

“That’s a really outstanding Arkansas ball club, and this game was typical of the games we’ve had with them over the years.”

LSU started off strong and tagged Murphy for two runs in the bottom of the first to take the 2-0 lead. Centerfielder Zach Watson doubled to right-center to lead off the game and scored on left fielder Antoine Duplantis‘ single up the middle. With one out and Duplantis on third, designated hitter Daniel Cabrera ripped a single up the middle to drive in Duplantis.

In the top of the third inning with one out and rightfielder Eric Cole on first after reaching on a fielder’s choice, centerfielder Dominic Fletcher homered to right field to knot the game at 2-2.

Arkansas took the 3-2 lead in the top of the fifth inning when designated hitter Evan Lee drew a bases-loaded walk to drive in Cole.

With two outs and the bases loaded in the seventh, Bain unleashed on the first pitch he saw and drove it to left-center to give LSU the 4-3 lead after bringing home left fielder Beau Jordan and second baseman Brandt Broussard, who reached earlier in the inning with an infield single and a throwing error, respectively.

With Tigers on first and second with one out in the bottom of the eighth, Watson singled to the pitcher, who sailed a ball down the right field line to plate both catcher Hunter Feduccia and Jordan.

The Razorbacks threatened in the top of the ninth inning and cut the LSU lead to two runs. Cole singled up the middle to drive in pinch hitter Luke Bonfield who drew a four-pitch walk to lead off the inning. Peterson entered with no outs and Cole on first and induced a fly out to right field and recorded two strikeouts to secure the Tigers’ victory.