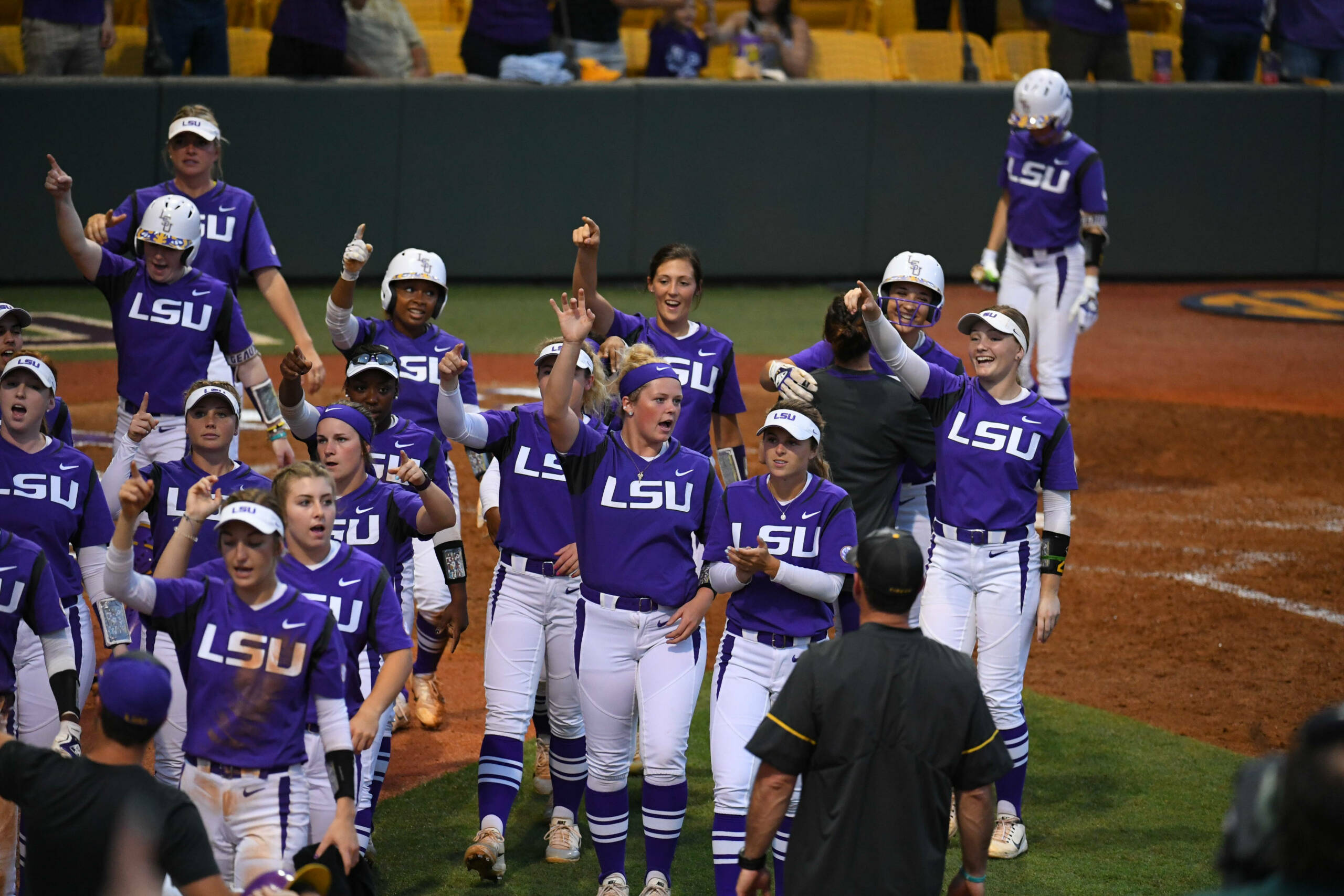 LSU got on the board early after Taryn Antoine scored from third base on a passed ball, giving the Tigers a 1-0 lead. In the bottom of the third inning, Amanda Doyle drove in Aliyah Andrews to extend their lead to 2-0.

Arkansas answered the very next inning with a lead-off solo homerun and a sacrifice fly to tie the game up at two apiece.

However, in the bottom of the fourth inning the Tiger offense responded with a two-run dinger by Michaela Schlattman that scored Claire Weinberger, putting the Tigers back on top for good, 4-2.

Later in the inning, Antoine would get her first career triple with a line drive down the right-field line to score Becca Schulte. Antoine would later score on a single from Emily Griggs to bring the score to 6-2 and putting a cap on a big four-run inning.

In the bottom of the fifth inning, Shelbi Sunseri hit a two-run home run, scoring Shemiah Sanchez and extending the lead to 8-2. Senior Sydney Loupe would later come in to pinch hit and picked up her first career hit as a Tiger and was eventually the game-ending run thanks to a single by Griggs, giving the Tigers the 10-2 win.

Maribeth Gorsuch pitched her sixth complete game of the season, going five innings, striking out three, and picking up her eighth win of the season.

Opening statement…
“It’s really good to see our offense perform like they did tonight. I think we were extremely well prepared for tonight. We worked hard to be ready for the game. It’s great to see how we performed and executed the game perfectly.”

On Loupe’s first career hit…
“I couldn’t stop crying at third base. I was so happy for her. It felt like somebody was looking out for us during a moment like that. I wanted her to be able to bat. I loved how our fans stood up and cheered for her no matter what happened. It was well-deserved for all the effort she’s put into the program for four years. The hit she had was just surreal. Sydney is a good player and she performed well against Arkansas’ pitcher.”

B5 | @loupeyloop11 comes in to pinch hit and she gets her first career hit as a senior! What a moment on Senior Tribute Weekend as the crowd comes to a standing ovation!

SYDNEY LOUPE
On getting her first career hit…
“My teammates believed in me in the beginning, so being able to get the hit for them and win the game early was great.”

On her thoughts about senior weekend…
“It’s very emotional. Leaving behind the fans and coaches will be really hard, but I’ll be an hour and a half away from Baton Rouge. I’ll be back.”

EMILY GRIGGS
On scoring 10 runs against an SEC opponent…
“We were playing for a bigger cause tonight. We wanted to win our last regular season series and we were doing it for each other. Tonight’s win felt like it was something bigger than us.”

On the offensive explosion and taking the momentum into postseason…
“It’s extremely important to keep this momentum going. Championship games aren’t won during February, they’re won during May and June. That’s when it matters. What you do in the early season matters as well, so you get in better positions, but what matters the most is right now — postseason and leading up to postseason. I think we’re in a great spot and I think we can only go up from here.”

>> Senior Sydney Loupe picked up her first career hit for her tenure at LSU in her fifth at-bat of her career.

>> Andrews stole her 37th base of the season, needing eight to tie the record of 45 set by Kirsten Shortridge and Dee Douglas.

>> LSU picked up 13 hits on the night with Andrews, Griggs, Doyle, Sunseri, and Schlattman leading the charge with two each. Sydney Springfield, Antoine, and Loupe each had one.

Next up, LSU and Arkansas will play the final game of the series on Sunday, May 6 at 3 p.m. CT. The game will be broadcast live on ESPN 2.