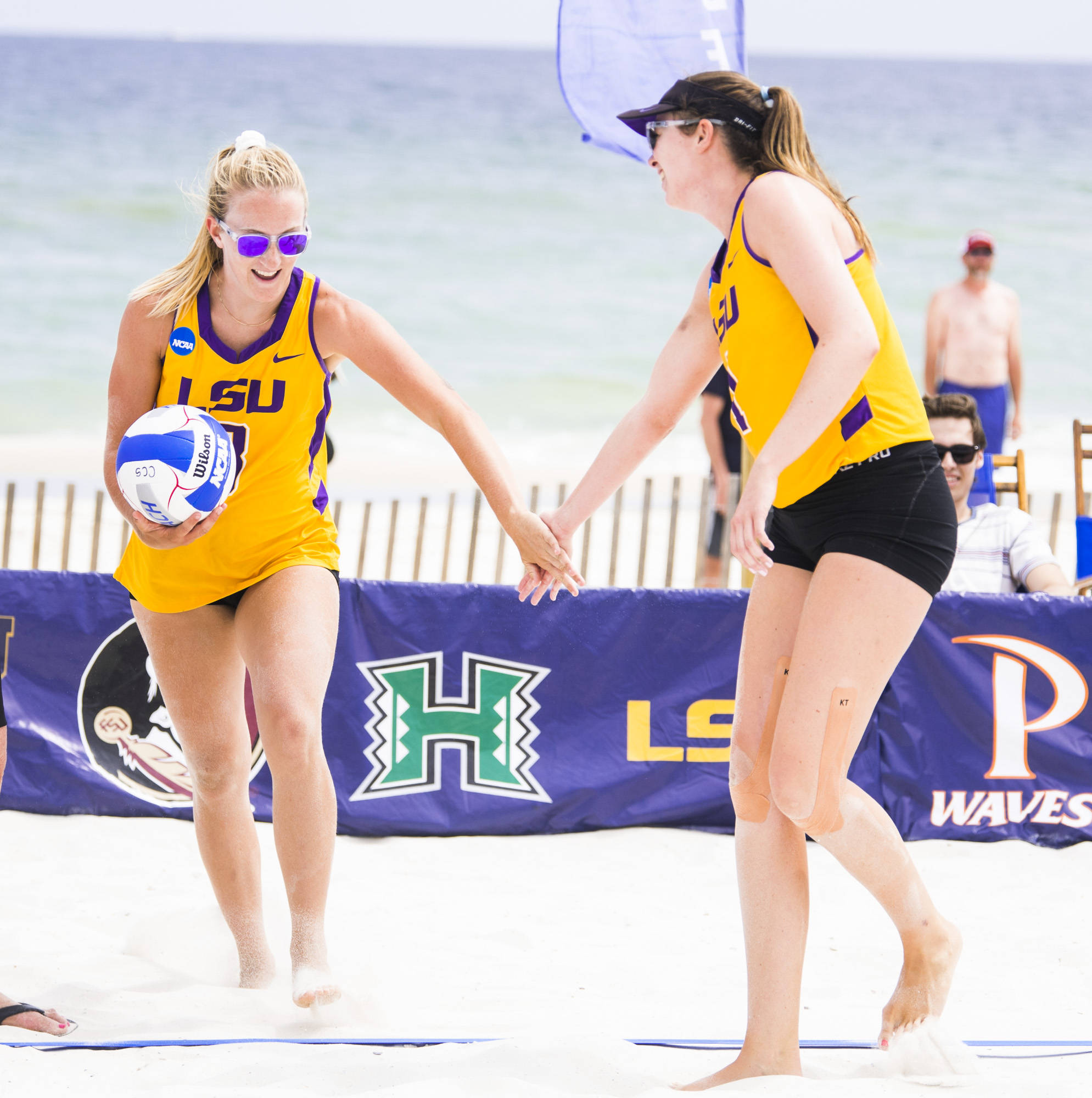 GULF SHORES, Ala. – The seventh-seeded LSU beach volleyball team concluded it season on Day Two at the NCAA Championship, falling to the top-seed UCLA, 3-0, on Saturday afternoon.

This was the second straight season that LSU made it to the NCAA Championship in its young, five-year history. The Tigers tied their all-time season wins record, compiling a 27-14 record in the beach this season. LSU went 1-2 at the NCAA tournament, picking up its lone win Friday afternoon against South Carolina, 3-1.

“Coming off of last season, which was so good, there were higher expectations this year,” said LSU head coach Russell Brock. “Sometimes those expectations are really hard to overcome. To be able to come out and play well enough to do some things that we’ve never done, that encapsulates who we are.”

LSU fell in straight sets on courts one, two and three as UCLA earned the sweep. Haleigh Nelson and Mandi Orellana, both playing in their final match as Tigers on Court Two, fell 21-10 and 21-8. On Court 3, Olivia Powers and Hunter Domanski dropped their first two sets, 21-15 and 21-13.

Claire Coppola and Kristen Nuss struggled to get going on Court 1, falling in the first set, 21-10. In set two, the LSU duo trailed 10-17, but they didn’t stop clawing. Unfortunately, their comeback attempt fell just short, 21-17, as UCLA advanced in the loser’s bracket, winning, 3-0.

On Court 5, Riley Young and Maddie Ligon fell in the first set, 21-16 while Megan Davenport and Emmy Allen battled in set one on Court 4, but ultimately dropped it, 23-21. Young and Ligon were leading on Court 5, 20-19 and Davenport and Allen had just evened Court 4 with a 21-14 victory in the second set when UCLA clinched the match on Court 1.

The sophomore duo of Coppola and Nuss finished with a team-high 31 victories this season, taking home the CCSA Pair of the Year award. Allen and Davenport were the next best duo for the Tigers, notching 18 victories in 2018.

“Even though it didn’t end how we wanted it to, I think we defied a lot of odds this season and accomplished a lot,” said Coppola.

Young and Orellana both stand in the top-10 for all-time wins individually for the Tigers. Young sits at number four with 67 wins while Orellana is ninth on the list with 50 victories.

“I cannot imagine where we would be as a program without their contributions to the program over the past four years,” said Brock. “I’m proud that we honored them and the work that they put in with our results here this weekend.”

“Playing for LSU has been the biggest treat that I’ve ever had,” said Young. “Making it to Day Two was awesome. I think a lot of people didn’t think we could make it, but we did and I thought it was a great way to end the season and this four-year run,” said Young.