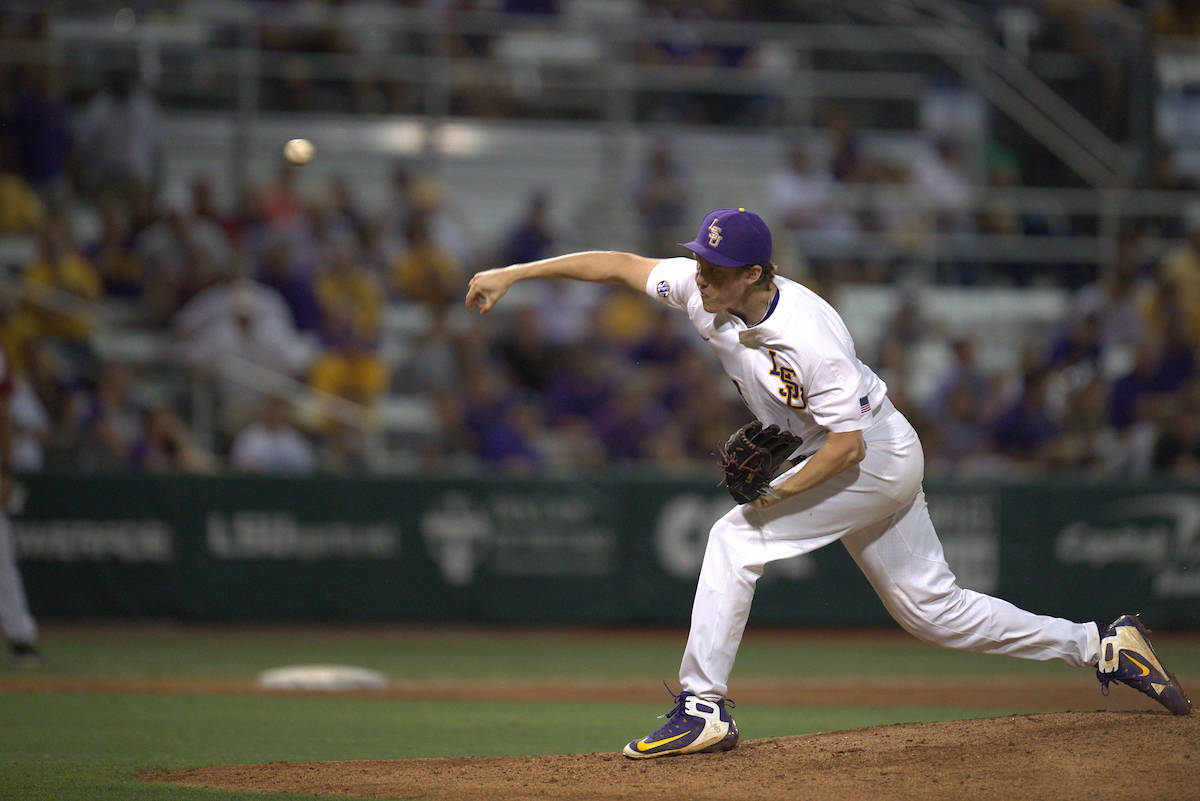 The Tigers and Razorbacks return to action in Game 2 of the series at 7 p.m. CT Saturday in “The Box”. The game will be televised by the SEC Network, and it can also be heard on affiliates of the LSU Sports Radio network. Live audio and live stats will be available at LSUsports.net.

“That was as tough as they get right there,” said LSU coach Paul Mainieri. “(LSU starting pitcher) Zack Hess gave us a great chance to win, he was outstanding tonight. I’ve got to give a lot of credit to the Arkansas hitters, they kept finding a way to put the barrel on the ball late in the game, and that was the difference.

“It was a tough one that we’re going to have to put behind us, and we’ve got to get ready to play these guys again in less than 24 hours.”

Arkansas reliever Barrett Loseke (2-1) earned the win, entering the game in the seventh inning and firing 2.1 innings shutout innings. The right-hander allowed just one hit while walking three and striking out two on 41 pitches.

Jake Reindl earned his fifth save of the year and struck out the final two LSU hitters with runners on the corners to end the game.

The loss was charged to LSU reliever Nick Bush (0-1), who allowed one run on four hits and walked one in two innings of work.

Arkansas right fielder Eric Cole led off the game with a solo shot to right field, but LSU countered in the bottom of the second to tie the game, 1-1.

With leftfielder Beau Jordan on third after a leadoff single, designated hitter Daniel Cabrera worked a 13-pitch at-bat and sent a sacrifice fly to center field, knotting the game.

The Razorbacks regained the lead in the top of the third when catcher Grant Koch ripped a ball over the foul pole in left field. After originally calling a foul ball, the umpires reviewed the play and ruled it a home run.

Jordan laced a no-doubter into left field against Arkansas starter Blaine Knight to tie the game with a solo home run, his seventh dinger of the season. The Tigers continued the rally with rightfielder Antoine Duplantis‘ double to right-center. First baseman Austin Bain ripped LSU’s third-straight hit of the inning to drive in Duplantis, and LSU grabbed the 3-2 advantage.

In the top of the sixth inning, Arkansas had the bases loaded with one out, but Hess struck out DH Evan Lee and Jordan made a leaping catch in left field to erase the threat.

The Tigers added to the lead in the bottom of the sixth inning to make it a 4-2 game after Bain led off the inning with a walk and later touched home on catcher Hunter Feduccia‘s two-out single into center field.

Arkansas grabbed the lead in the top of the eighth against Hess and Bush. Cole hit his second home run of the night to lead off the inning, and centerfielder Dominic Fletcher ripped a single up the middle to end Hess’ outing.

Bush allowed a single, but then induced a double play, which put Fletcher on third. Lee and first baseman Jared Gates delivered back-to-back RBI singles to give Arkansas the edge.