LSU Plays Host to Arkansas This Weekend at Alex Box 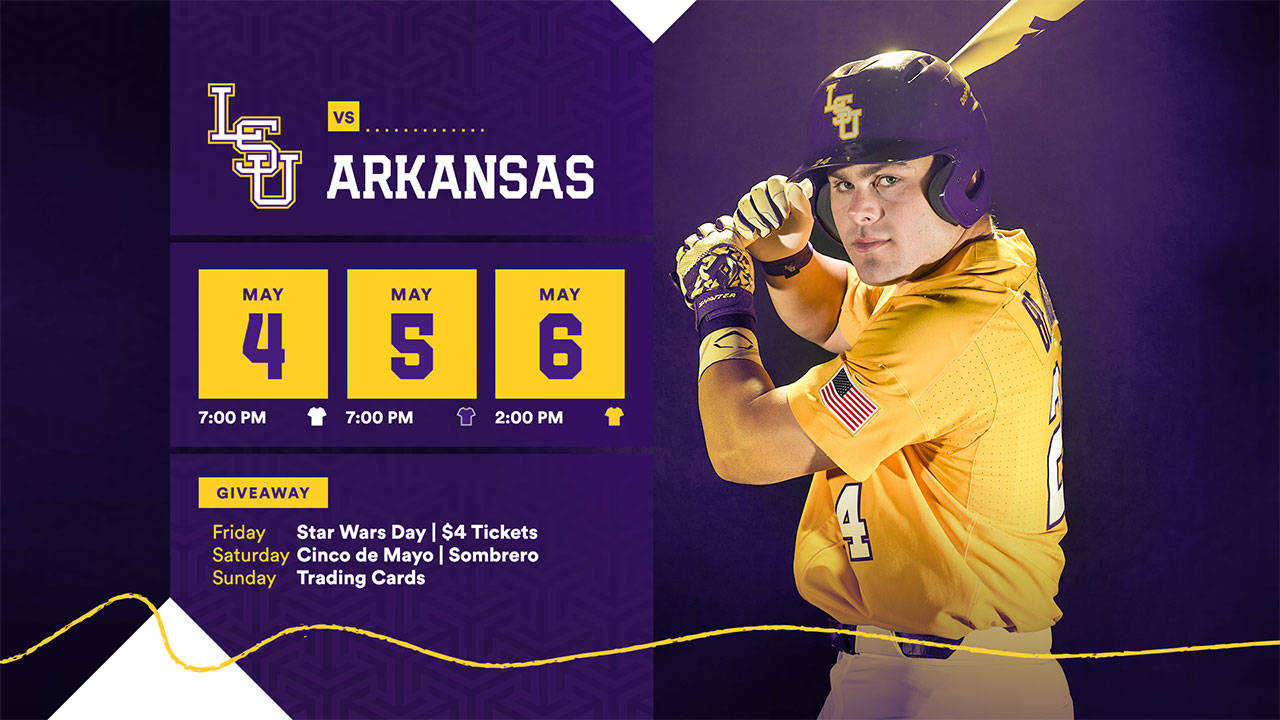 SERIES RECORD
LSU leads the all-time series with Arkansas, 70-31, and the Tigers have won 12 of their last 13 SEC regular-season series – including the past six in a row — versus the Razorbacks, including a 2-1 series victory last season in Fayetteville. LSU also defeated Arkansas, 4-2, in last season’s SEC Tournament championship game in Hoover, Ala. The only regular-season series win for Arkansas over LSU in the past 13 seasons came in 2011, when the Razorbacks swept three games from the Tigers in Fayetteville. The Tigers are 34-13 against Arkansas over the past 13 seasons, including two wins over the Razorbacks in the 2009 College World Series.
.
PITCHING MATCHUPS
Game 1
LSU – So. RH Zack Hess (6-4, 3.92 ERA, 64.1 IP, 31 BB, 77 SO)
UA – Jr. RH Blaine Knight (7-0, 2.45 ERA, 62.1 IP, 15 BB, 63 SO)

QUOTING PAUL MAINIERI
“This is it, we’re down to the stretch run here. There’s no ‘Let’s wait around, let’s keep improving.’ We need to win. We’re playing a tremendous team that’s ranked No. 4 in the country. If we want to make a move to qualify for the NCAA Tournament, we have to get it done against a quality team like Arkansas. We’ve got to go out and battle against one of the best teams in the country, and we’ve got to get the job done. This is an amazing opportunity for us, and I know our players are ready to embrace this challenge.”

ABOUT THE TIGERS
• LSU is currently 10-11 in the SEC, and the Tigers are three games out of first place in the Western Division behind Arkansas (13-8).
• Freshman right-hander Ma’Khail Hilliard defeated fifth-ranked Ole Miss with a brilliant outing last Friday night … Hilliard limited the Rebels to one run on four hits through a career-high seven innings with three walks and six strikeouts, leading LSU to a 5-2 win … he allowed one run against Ole Miss in the bottom of the first inning and then fired six straight shutout innings to complete his outing, firing a career-high 107 pitches … Hilliard retired 16 of the final 19 batters he faced, including the last seven in a row.
• Junior rightfielder Antoine Duplantis hit .471 (8-for-17) in the Tigers’ four games last week with one triple, four RBI, five runs and one stolen base … Duplantis is third in the SEC in base hits this season with 64, and he is seventh in the league in batting average (.354).
• Sophomore centerfielder Zach Watson hit .400 (6-for-15) last week with three doubles, two RBI and three runs … junior catcher Hunter Feduccia produced a double and five RBI last week, including three RBI in LSU’s win at fifth-ranked Ole Miss on Friday night.
• Senior first baseman Austin Bain belted three doubles last week, and he leads the SEC in doubles this season with 16.
• LSU is No. 6 in the SEC with a .288 team batting average; the Tiger hitters have the fewest strikeouts in the league with 274. The LSU pitching staff is No. 12 in the SEC with a 4.56 team ERA.
• Sophomore right-hander Zack Hess is seventh in the SEC with 77 strikeouts.

ABOUT THE RAZORBACKS
• Arkansas is No. 1 in the SEC in team batting with a .310 average, and the Razorbacks have unloaded a league-high 69 homers.
• The Razorbacks are No. 3 in the SEC in team ERA with a mark of 3.42. Arkansas pitchers have recorded 418 strikeouts, the fourth-highest total in the league.
• Freshman outfielder Heston Kjerstad is batting .368 on the year with 12 doubles, nine homers and 39 RBI, and senior infielder Carson Shaddy is hitting .356 with seven doubles, one triple, nine homers and 29 RBI … freshman infielder Casey Martin and junior outfielder Eric Cole each have a team-best 10 homers for the Razorbacks this season.
• Junior right-hander Blaine Knight (2.45) and junior left-hander Kacey Murphy (2.54) are No. 4 and No. 6, respectively, in the SEC in ERA.