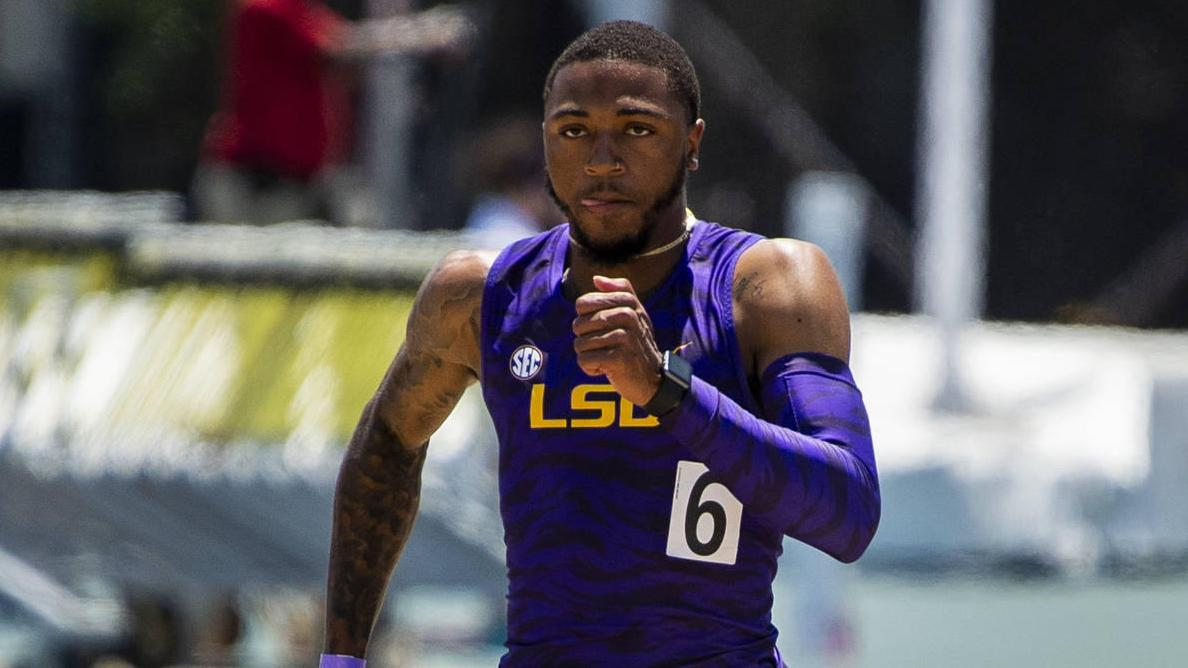 BATON ROUGE, La. – Jaron Flournoy registered the sixth-fastest 200-meter dash time of the season in the NCAA on Saturday afternoon at Bernie Moore Track and Field Stadium as the LSU track and field team closed out it’s 2018 regular season with the LSU Invitational.

Flournoy, who competed thrice on Saturday, won the 200 meter race with a wind-aided time of 20.23 to walk away as the top finisher in the 22-man field. In the 100 meter dash, Flournoy registered a personal best of 10.32 to collect a seventh-place finish overall (third collegiately). He closed out his day as a member of the 4×400 meter relay team that registered a season-best time of 3:04.63. The time by Jahnoy Thompson, Flournoy, Renard Howell and Correion Mosby is the seventh fastest in the NCAA in 2018.

Jaron Flournoy is the champ in the 200 meter dash with a time wind-aided time of 20.23! It’s the 6th fastest time in the NCAA this year! pic.twitter.com/A4Gl8NyGh1

Both the women’s and men’s 4×100 meter relay started the meet off with first-place collegiate finishes. The foursome of Mikiah Brisco, Kortnei Johnson, Rachel Misher and Aleia Hobbs recorded a season-best time of 42.49 to better their NCAA lead in the event on their way to gold. The men’s 4×100 meter relay squad of Damion Thomas, Renard Howell, Correion Mosby and Akanni Hislop registered a time of 39.49 to finish second overall.

The LSU 200 meter dash crew of Kortnei Johnson, Mikiah Brisco and Zakiya Denoon took three of the top four spots in the event. Johnson crossed the finish line in 22.83 seconds for gold while Brisco clocked a 22.86 for silver. Denoon came in fourth place with a personal-best time of 23.04.

The Tigers had two collegiate winners in the 400 meter hurdles. Christan Boyd won his race with a time of 51.12 and Kymber Payne placed second overall with a time of 56.00 behind professional hurdler Shamier Little.

Kaitlyn Walker leaped her way to a career best in the high jump on Saturday afternoon. The Gonzales, La., native cleared five feet, 11.25 inches (1.81m) to move into sixth place all time in program history. It’s her first win of the season in the event and it ranks as the 14th-best jump in the NCAA.

Aleia Hobbs won her second 100 meter dash race of the season with a time of 11.06 and Tonea Marshall claimed the top spot in the 100 meter hurdles with a readout of 13.06. Ersula Farrow was the top collegiate finisher with a personal-best time of 4:20.99 in the 1,500 meter run; the time of 4:20.99 ranks as the ninth fastest in program history.

Freshman hammer thrower Jake Norris narrowly missed out on a personal best when he heaved the hammer 238 feet, four inches (72.64m) for a second-place finish. Da’Quan Bellard garnered silver in the triple jump with a mark of 51 feet, two and a quarter inches (15.60m).

The Tigers will take a week off from competition before they head to Knoxville, Tenn., for the SEC Championships (May 11-13).