Tigers Return Home to Face Lamar at The Box 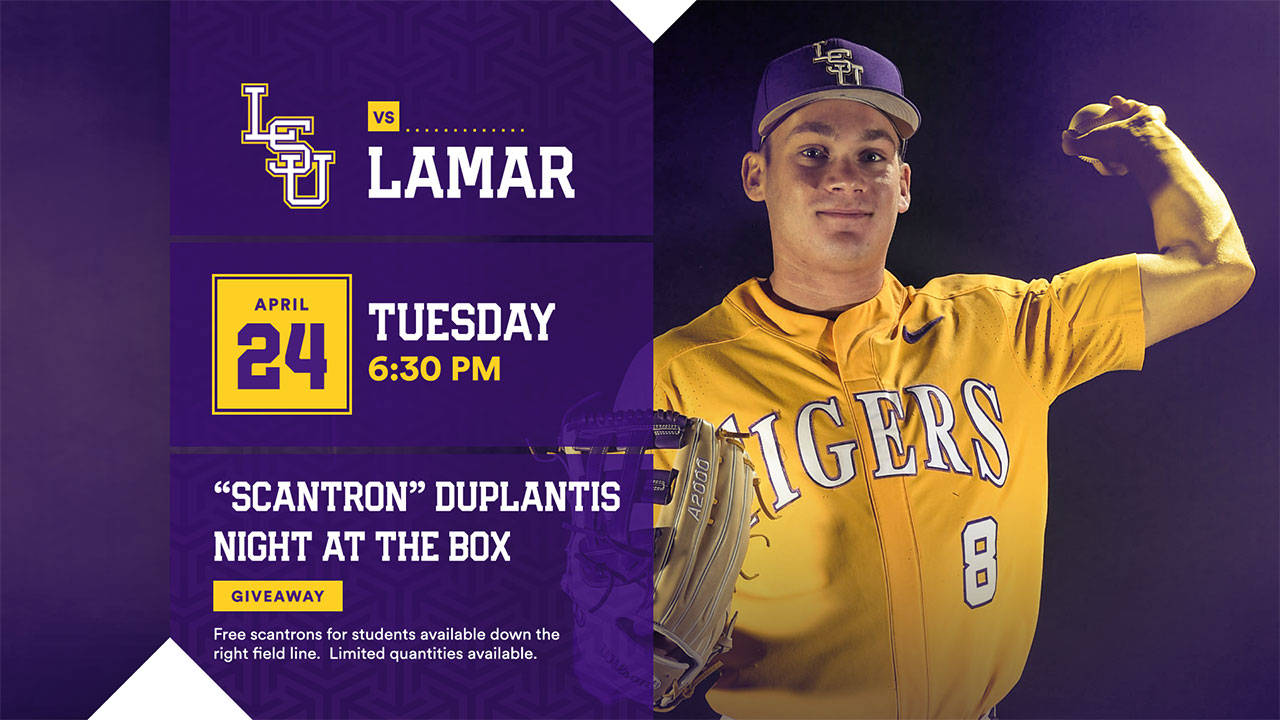 SERIES RECORD
The LSU-Lamar all-time series is tied 6-6, as the teams’ first meeting came in 1984. LSU and Lamar are matching up for the seventh consecutive season (2012-18). LSU posted a 10-4 win over Lamar last season in Baton Rouge, and the Cardinals defeated the Tigers, 12-11, in 2016 in Beaumont, Texas. Lamar’s victory in 2016 broke the Tigers’ five-game win streak in the series.

QUOTING PAUL MAINIERI
“We had a team meeting after we returned from South Carolina, and we talked about what it’s going to take to win the Lamar game. Lamar just had a six-game win streak end with an extra-inning loss on Sunday, so they are playing very well right now. Our players understand what a huge responsibility it is to maintain the tradition of LSU Baseball, and to establish their own legacy. They’re working and competing as hard as they can, and we’re going to keep a positive frame of mind because we know there are a lot of challenges in front of us.”

ABOUT THE TIGERS
• The Tigers are not ranked in this week’s polls, ending a streak of 124 consecutive weeks LSU has appeared in a Top 25 poll … the last time LSU wasn’t ranked in a poll was the final week of the 2011 season … since the end of the 2011 season, LSU has been an NCAA Tournament National Seed in six straight seasons (an NCAA record), and the Tigers have made three College World Series appearances, advancing to the CWS Finals in 2017.
• LSU is 9-9 in the SEC, and the Tigers are one game out of first place in the Western Division behind Arkansas and Ole Miss (both 10-8) … LSU plays at Ole Miss later this week, with the three-game series starting on Thursday at 7 p.m. CT in Oxford, Miss.
• Sophomore left-hander Nick Bush made the first SEC start of his career Sunday at South Carolina, and he delivered an excellent performance, firing five shutout innings and limiting the Gamecocks to three hits with no walks and seven strikeouts … Bush’s innings pitched and strikeouts at South Carolina represented career highs.
• Senior catcher/infielder Nick Coomes batted .500 (5-for-10) in four games last week with one homer, two doubles, four RBI and two runs scored … Coomes hit a three-run homer – his first dinger of the season – on Saturday at South Carolina, and he had a career-best four hits in five at-bats at Tulane on Wednesday night.
• Freshman outfielder/DH Daniel Cabrera batted .357 (5-for-14) last week with one double, one homer, six RBI and four runs scored … Cabrera was 3-for-4 in Sunday’s game at South Carolina with a three-run homer and a run-scoring double.
• Senior infielder/pitcher Austin Bain hit .353 (6-for-17) in four games last week with one double, two RBI and one run scored.

ABOUT THE CARDINALS
• Lamar is coached by former LSU player and assistant coach Will Davis, who was a catcher at LSU from 2004-07, and he worked as an assistant under Paul Mainieri from 2008-15. Davis is in his second season at the helm of the Lamar program.
• The Cardinals have won six of their past seven games and saw their six-game win streak end on Sunday with an extra-inning loss to Abilene Christian.
• Lamar is led at the plate by junior infielder Robin Adames, who has six doubles, four homers and 23 RBI, and by freshman outfielder Cole Secrest, who has four doubles, three homers and 26 RBI.