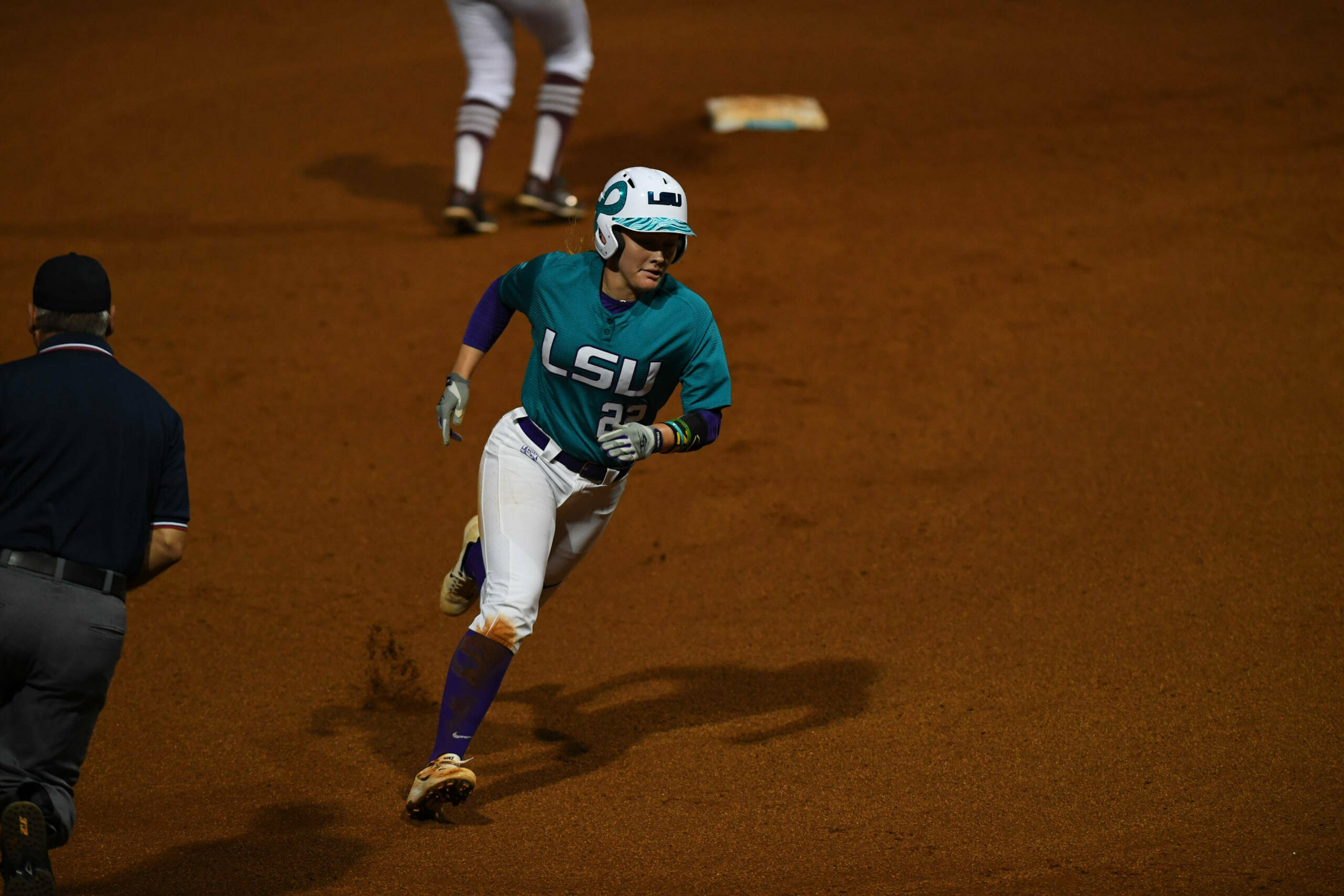 BATON ROUGE — The LSU softball team came out on top in game two, clinching the series against No. 9 Texas A&M with a 3-2 win Saturday night for LSU’s Strikeout Ovarian Cancer game in Tiger Park. With the win, LSU improves to 35-10 on the year and 9-7 in conference play, while the Aggies fall to 36-12 and 9-8 in the SEC.

The Tigers got on the board first after an Amanda Doyle double that drove in Emily Griggs to put the Tigers up, 1-0 in the bottom of the third inning.

The very next inning, Sydney Springfield came in as a pinch hitter and singled up the middle to bring in Claire Weinberger, who pinch ran for Shelbi Sunseri at second base, extending the Tigers’ lead to 2-0.

Doyle then led off the bottom of the fifth inning with her second double of the game, and eventually scored the Tigers third and final run thanks to Amber Serrett‘s double to right center.

Texas A&M strung together a couple of hits and scored a run off LSU starter Allie Walljasper with no outs. The Tigers went to the bullpen and brought in Carley Hoover for the save. An LSU error gave the Aggies another run, but Doyle turned a five-three double play and lineout to Doyle ended the game.

Allie Walljasper pitched six innings, while striking out five on the night. She picked up her 13th win of the season. Hoover earned her first save of the season, and the ninth of her career.

Opening statement…
“Tonight was a huge series win for us. It was a really good team effort, and everyone contributed. Both of our pitchers and a lot of our offense had a great game. This game was a good team win.”

On Amanda Doyle‘s three double hits…
“Amanda has had a really good weekend. She worked really hard and made some adjustments in the beginning. Everything really worked well for her tonight.”

On Carley Hoover and Allie Walljasper‘s excellent pitching…
“Both players did a great job for us this weekend. They work well together and support each other every step of the way. I know Allie would have liked to finish the game, but I know she was pulling hard for Carley when she was pitching.”

>> LSU tallied four doubles on the night, the most in a single game by the Tigers this year. Doyle had two and Serrett and Sunseri each had one.

>> The win marks the 28th win at home this season and the Tigers are 33-2 when allowing two runs or less.

>> Carley Hoover picked up her first save of the season, giving her nine in her career. She is now in sole possession of the second most saves in program history, behind Britni Sneed who has 12.

>> The Tigers had eight hits as a team on the night. Doyle led the team with two, while Aliyah Andrews, Springfield, Griggs, Shemiah Sanchez, Serrett, and Sunseri each had one.

On Deck
Next up, LSU will try to go for the series sweep against Texas A&M on Sunday, April 22 at 4 p.m. CT in Tiger Park. The game will be broadcast live on the SEC Network.