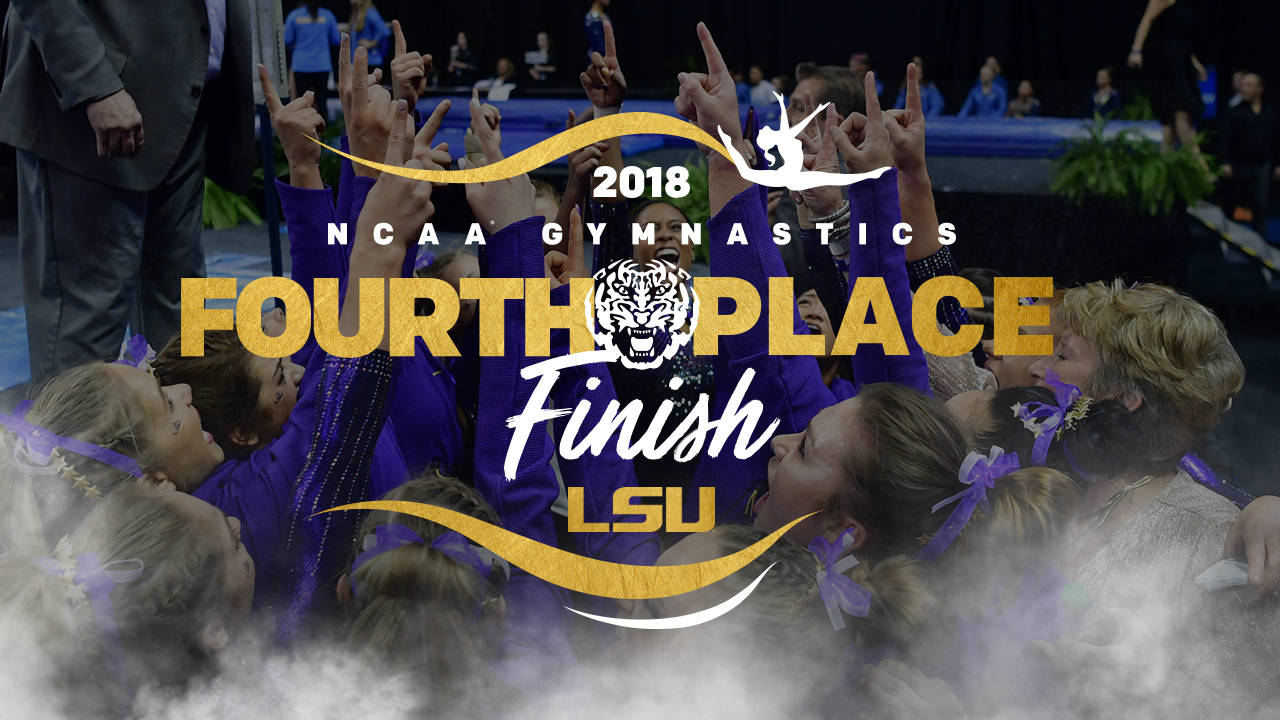 ST. LOUIS – In what was the closest and thrilling NCAA Championships ever, the LSU gymnastics team capped off an outstanding 2018 season with a team score of 197.8375, the highest Super Six score in school history, to finish fourth nationally Saturday evening at Chaifetz Arena.

UCLA ultimately took the national championship with a score of 198.075. Oklahoma finished second with a 198.0375 and Florida finished ahead of the Tigers in third with a 197.850.

“It was a fabulous meet,” LSU gymnastics head coach D-D Breaux said. “The lead changed and momentum changed. We fought no matter what. I can’t ask for much more than that. We had some great performances across the board from different people. There was just so much competition out there. It was so exciting.”

The Tigers wrapped up the season with a record of 33-5 for the second-most wins in school history. The squad extended the NCAA Gymnastics record of team scores with a 197 or better to 38 and have now reached that benchmark in every single meet for the last two seasons.

Senior Myia Hambrick wrapped up her outstanding career by finishing second in the all-around with a score of 39.6625, the highest at an NCAA Championships for an LSU gymnast in school history.

“Myia was amazing tonight,” Breaux added. “She did a beautiful job on bars to start and got better as the night went on. I can’t say enough of what she did on floor and vault. I don’t think I’ve ever see her do a better vault than what she did tonight. She just epitomizes what an LSU gymnast should be.”

Edney, Priessman Score 9.95s to Start on Bars
After a first rotation bye, Hambrick recorded a strong 9.875 in the second spot to get the meet started for the Tigers. Ruby Harrold nailed her routine and earned a 9.8875. Kennedi Edney and Lexie Priessman earned the stick crown with their 9.95 routines, and Finnegan anchored with a 9.8125. The 49.4750 total score tied the Tigers’ second-best bar event score in LSU postseason history.

Solid Beam Routines Propel LSU Before Second Bye
In the third rotation, Hambrick notched a solid 9.8875, Edney scored a 9.8375 in the third spot, and freshman Christina Desiderio followed with a 9.875. The Tigers built on each of their scores in the final two spots as freshman Reagan Campbell performed a beautiful routine for a 9.875 to set a new career high.

Finnegan anchored rock solid with 9.9375. LSU dropped the 9.7375 that Erin Macadaeg scored in the leadoff spot in her final routine as a Tiger. After the third rotation, LSU had compiled a 49.3875. At that point, LSU sat in third place with a 98.8625 behind Oklahoma and Florida at the halfway point of the meet.

Finnegan, Hambrick Score Large in Floor
Ashlyn Kirby recorded a 9.85 in the leadoff spot, and Desiderio posted a 9.90 to set a new career high with a beautiful routine. Edney earned a 9.8625 in the fourth spot. Finnegan and Hambrick went back-to-back 9.95s to close out the rotation with a 49.5125 on the floor.