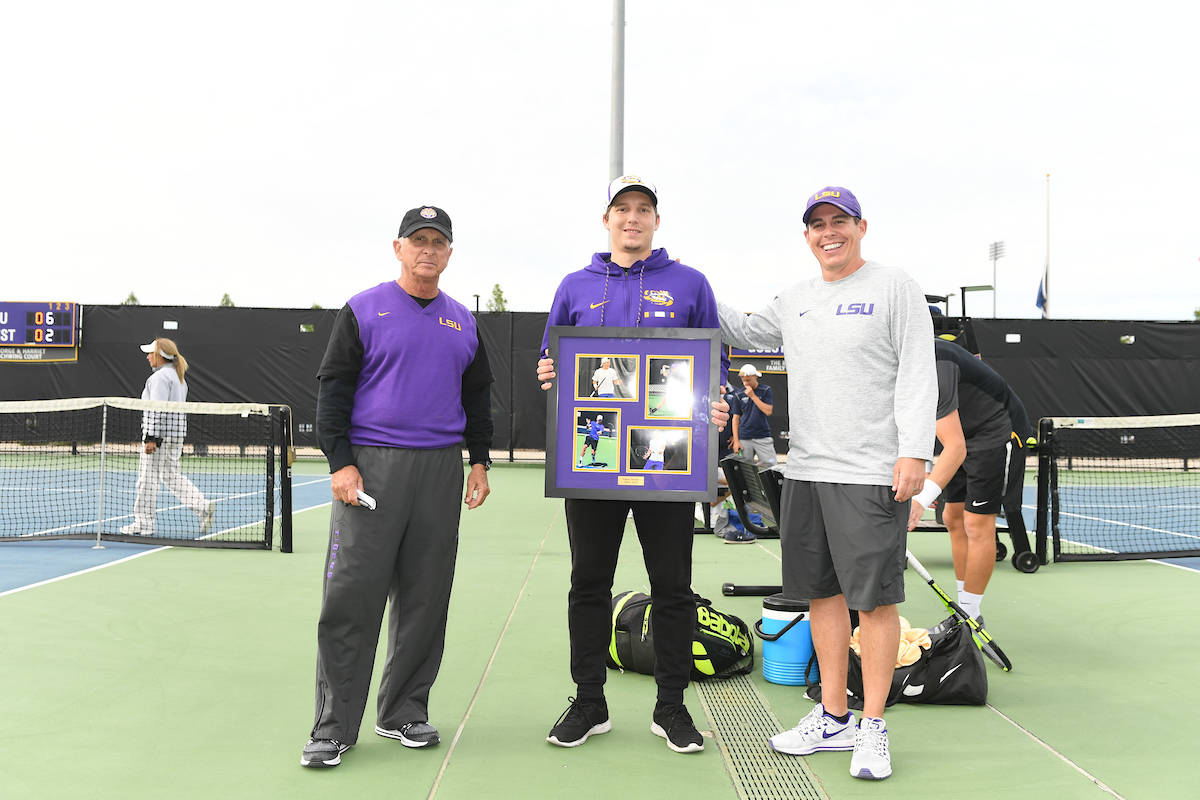 Co-Head Coach Chris Brandi on the Match
“It was a good match from both teams,” co-head coach Chris Brandi said. “We needed to win another dual match and gain a little confidence going into the SEC Tournament. I think the guys took care of business and were able to work on one or two things each that we think will carry over into next week.”

Doubles Point
LSU jumped out to the quick 1-0 lead with wins on courts one and three. No. 89 Rafael Wagner and Agie Moreno shut out Alexis Guedy and Christian Fjelsted, 6-0, on the top court. Tiger tandem Stewart Block and Shane Monroe clinched the doubles point with a 6-2 win over Lorezno Camilli and Giacomo Adoncecchi on court three.

Singles Results
To give LSU the 2-0 lead, Julian Saborio worked quickly on court four, taking a 6-1, 6-2 match against Adoncecchi.

After a tight set one, Wagner was able to work past Johnannes Klein with an efficient second set and extended the Tigers’ advantage to 3-0 with a 6-4, 6-1 win on court two.

Nikola Samardzic clinched the match for the second-straight week after earning a 6-2, 6-4 win against Nicolas Kramer on court three.

To make it 5-0 Tigers, No. 78 Monroe swept Guedy in consecutive 6-3 sets, and Moreno edged out Camilli in back-to-back 6-4 sets on court five.

Senior Recognition
The Tigers recognized senior Gabor Csonka between the conclusion of the doubles point and the beginning of singles play. During his time at LSU he has amassed 49 singles victories and garnered LSWA All-Louisiana Second Team honors during the 2016 season.

Next Up
LSU will travel to Tuscaloosa, Alabama, for the 2018 SEC Men’s Tennis Tournament. The Tigers will take on the Commodores of Vanderbilt at noon Thursday in the second round of the tournament at the Alabama Tennis Stadium.