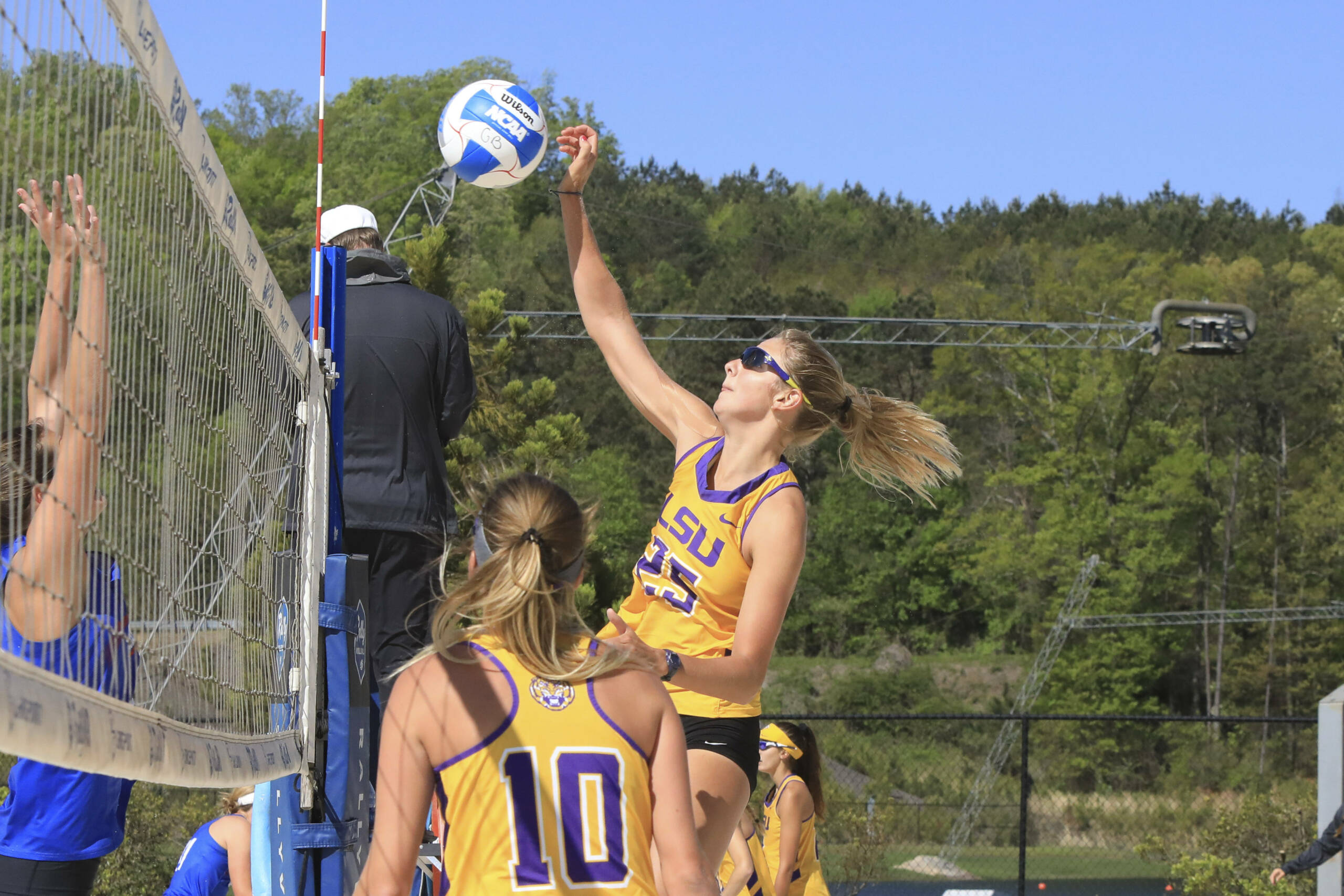 EMERSON, Ga. – The LSU beach volleyball team got off to a hot start at the CCSA Tournament, defeating Georgia State and UNC-Wilmington, both 3-2, on the first day of pool play at the Lakepoint Sporting Community Center on Friday.

“Today we had to battle against two talented teams that definitely played hard,” said coach Russell Brock. “This tournament has had really tight matches all throughout in both pools with three setters all over the place. It’s an exciting environment to play in.”

The Tigers kicked off the CCSA Tournament with a win on Court 1 against Georgia State. Claire Coppola and Kristen Nuss earned their 22nd straight-set victory of the season, winning 21-13 and 21-15.

On Court 5, Maddie Ligon and Riley Young took the match in straight sets, 21-17 and 21-13, as the Tiger jumped out to a two court advantage. Georgia State clawed back though and on Court 3, Olivia Powers and Hunter Domanski fell, 21-17 and 21-16.

Haleigh Nelson and Mandi Orellana fell in consecutive sets on Court 2, 23-21 and 21-18, as Georgia State was able to even the match up.

After taking the first set on Court 4, Emmy Allen and Megan Davenport fell in set two, 24-22, and the match with Georgia State came down to the final set. After the third set was tied, 2-2, Allen and Davenport separated themselves and never looked back, taking the set, 15-10, and clinching the match for the Tigers.

In the second match of the day against the No. 9 seed UNCW, the Tigers were looking to finish Day 1 of pool play with a 2-0 record. Similarly to in the first match of the day, Coppola and Nuss took the match in straight sets, 21-16 and 21-19, on Court 1.

The Tigers went on to clinch the next two matches on Courts 2 and 5 in straight sets as well. Nelson and Orellana took court 2, 21-10 and 21-11, earning their first match of the tournament. On Court 5, Ligon and Young held the lead the entire way, clinching the win for LSU, 21-17 and 21-14.

“The ones and fives did a great job of being consistent and finishing off both of their matches today,” said Brock.

The Tigers will take on Florida State on Saturday at 8 a.m. before closing out pool play at 12:30 p.m. against Florida Atlantic.

“Tomorrow we have two more really good opponents and we know we need to play well to do what we have to do,” said Brock.

The top two teams from Pool A and Pool B will advance to the semifinals which will be held on Sunday morning. The CCSA Championship match will take place Sunday at Noon CT.