NOT DONE YET! Gymnastics is Super Six Bound 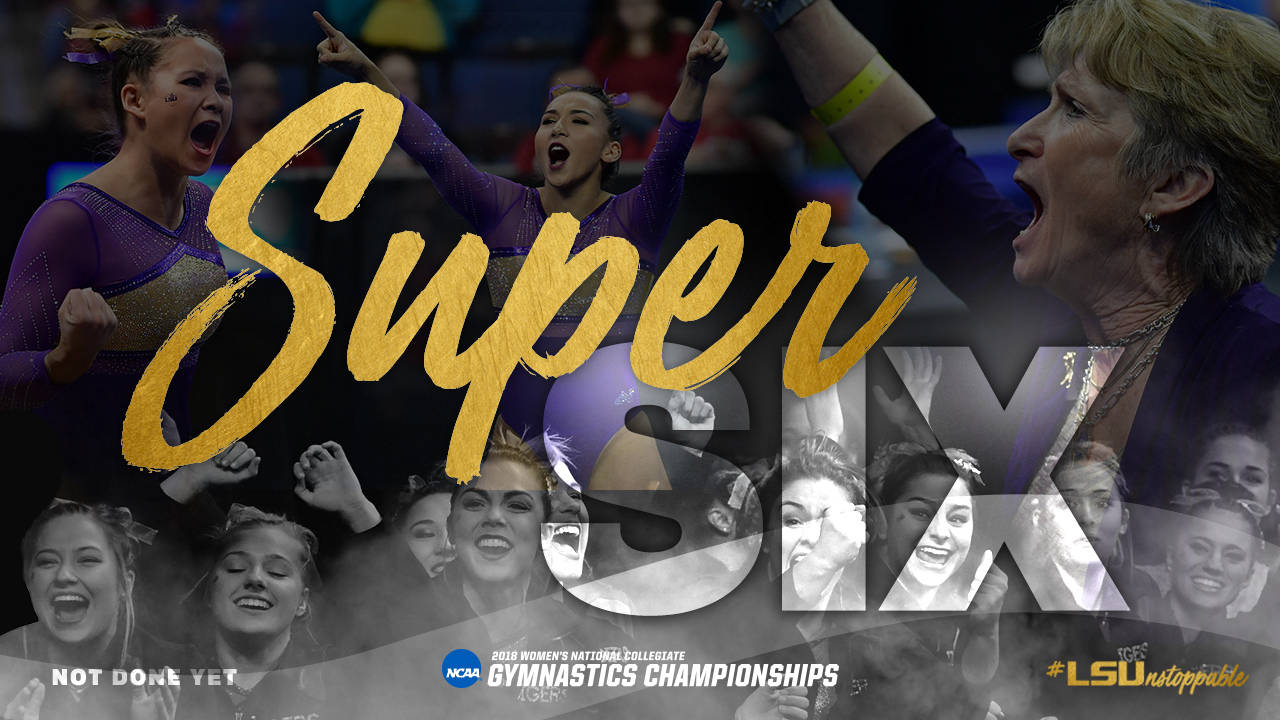 ST. LOUIS – For the fifth time in six seasons and the seventh time in school history, the No. 2 LSU gymnastics advanced to the NCAA Super Sixafter the Tigers took down four teams in the NCAA Semifinal I and posted a team score of 197.475 Friday afternoon in Chaifetz Arena.

The Tigers advanced to 31-2 on the season and have now recorded their 38th-straight meet with a score of 197. The team score marked the second highest at an NCAA semifinal in school history.

The squad will vie for the program’s first NCAA Championship at 6 p.m. CT Saturday on ESPNU. Since the Tigers finished second in the prelims, their rotation for the Super Six will be bye, bars, beam, bye, floor, vault.

Myia Hambrick, Kennedi Edney and Sarah Finnegan turned in outstanding all-around performances to finish second, third and fourth respectively. Hambrick scored a 39.5375, Edney totaled a 39.525 and Finnegan put up a 39.500.

“The environment today was fabulous, and I am proud of the performance today,” LSU Gymnastics head coach D-D Breaux said. “Reagan Campbell‘s performance was the pivotal point today to go in on beam and not blink. Then after each bye they brought a little more for each event. We just have to go in tomorrow and do our gymnastics.

Tigers Stay Consistent on Beam to Start
The Tigers opened with a strong showing on the beam for a 49.2250. Senior Erin Macadaeg led off the event with a solid 9.8125, and Hambrick competed second with a 9.8625 of her own. Edney added a 9.80 in the third spot, and after a fall, freshman Reagan Campbell showed no fear with a 9.85 before Finnegan anchored the event with a huge routine, 9.90.

Floor Posts Record Before First Bye
LSU moved to the floor and post the highest score in an afternoon preliminary session for the Tigers with a 49.400. Ashlyn Kirby opened with a 9.80, and freshman Christina Desiderio rebounded from the first rotation to post a career-high 9.8875. Edney recorded a 9.90 in the fourth spot, and Finnegan stepped in with a 9.8625. To cap off the second rotation, Hambrick performed a near-flawless routine and scored a 9.95.

Large Vaults Propels LSU in Fourth Rotation
Freshman Sarah Edwards notched a 9.85 in the leadoff spot. The Tigers used a 9.875 from Hambrick and 9.8875s from Julianna Cannamela and Edney. After the lights flickered during her vault, Finnegan was allowed to compete again in the anchor spot. The junior recorded a 9.85 to close out the fourth rotation before the bye and finalized the LSU score on vault at 49.350.

LSU Record Postseason Record on Bars, 49.500
The Tigers left no doubts on the bars and scored a 49.500 for the highest score at an NCAA Championships in school history in the final rotation. To lead off, freshman Sami Durante recorded a solid routine to earn a 9.8625. Ruby Harrold found her landing in the third spot for a 9.90, and Edney posted the No. 2 score of the afternoon with a beautiful routine for a score of 9.9375. Priessman followed with the No. 3 score of 9.9125 with her big routine. To cap the final rotation and put the Tigers into the Super Six, Finnegan scored a 9.8875.