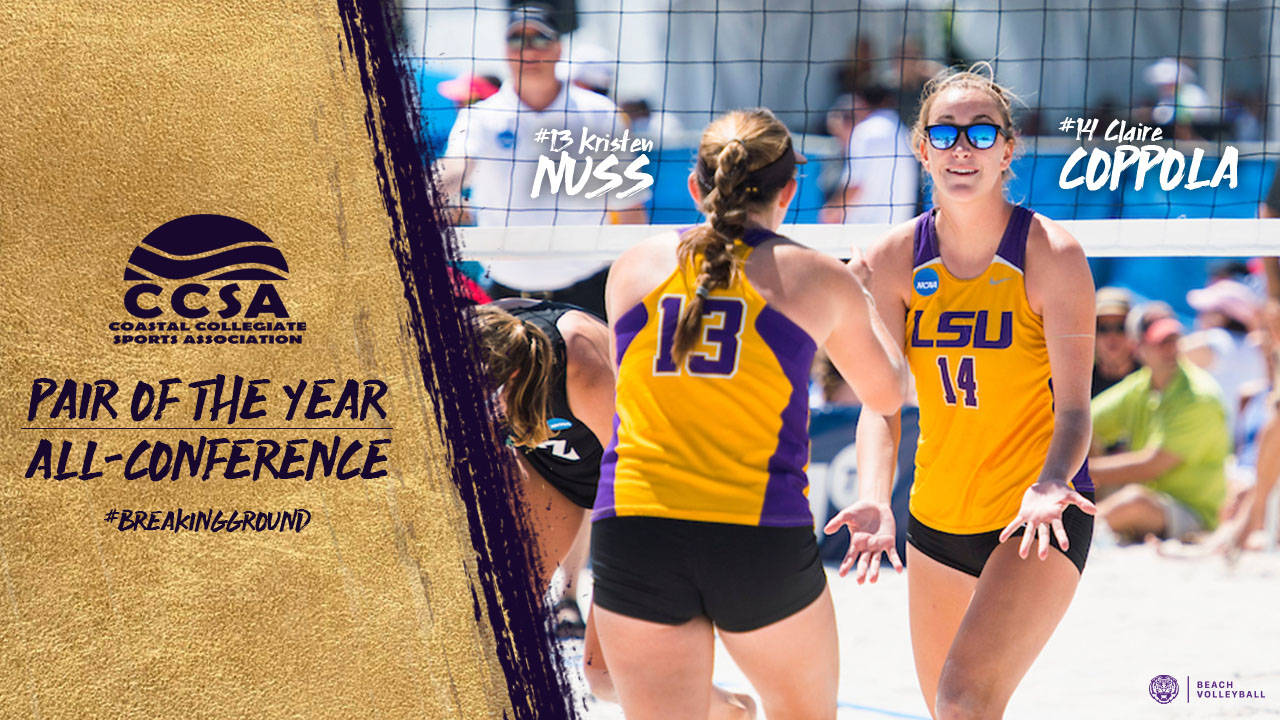 BATON ROUGE – The Court 1 duo of Claire Coppola and Kristen Nuss have been named the CCSA Pair of the Year along with earning All-Conference honors, the league announced Wednesday.

Coppola and Nuss are the first LSU duo to win CCSA Pair of the Year. The Tiger pair received All-Conference honors last season, during their freshman seasons. Coppola was named the CCSA All-Freshman team after her performance last season too. Over two seasons, the LSU duo has a 52-14 record.

The preseason All-Conference pair selection lived up to the hype, compiling a 25-7 regular-season and amassing win streaks of eight and thirteen at different points of the season. For one stretch, the LSU duo produced thirteen consecutive straight-set victories.

The sophomore tandem became the first LSU duo to be awarded the AVCA Pair of the Week, a national award, when it swept the weekend of March 18 at the Gamecock Grandlsam and defeated three pairs from top-15 teams. Along with that, Coppola and Nuss took home CCSA Pair of the Week for their performance at the Gamecock Grandslam and at the GCU Beach Tournament during opening weekend.

Hunter Domanski received CCSA All-Freshman Team Recognition following her inaugural campaign. Domanski compiled a 10-3 record on Court 3 this season and defeated pairs from seven ranked opponents on both Courts 2 and 3.

Megan Davenport, a junior, was named to the CCSA All-Academic team. Davenport has a 3.921 GPA and a history major with minors in psychology and sociology. Davenport has been named the Dean’s List and Cox Communications Academic Center Honor Roll in every semester during her collegiate career. Davenport is 25-6 this season with 19 of her wins coming on Court 4. Heading into the postseason, Davenport is riding a six-match win-streak.

LSU is the only team in the CCSA to have players named to the All-Conference, All-Freshman and All-Academic squads.