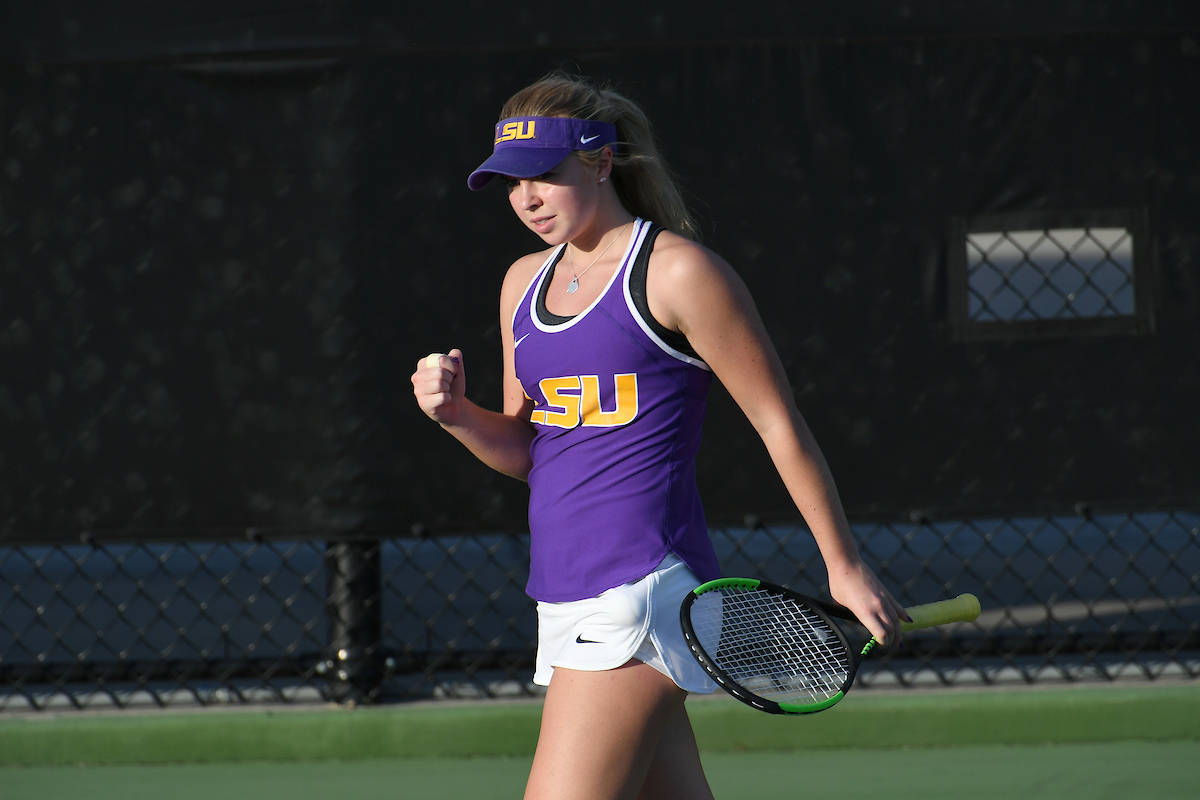 KNOXVILLE, Tenn. — Freshman Eden Richardson won the final two sets on court one to cap off an incredible 4-3 comeback victory as the No. 39 LSU women’s tennis team defeated No. 30 Mississippi State to advance to its fifth-straight SEC Tournament quarterfinals at Barksdale Stadium Thursday morning.

“I think we did a great job today of doing what we’ve been doing all season,” co-head coach Julia Sell said. “We took care of our side of the court and didn’t worry about whether we were up or down or winning the doubles point or losing the doubles point. We came out and took care of business and ended things in unbelievably cold weather conditions. It was a real tribute to our mental toughness that’s just been so strong all season.”

LSU improved to 15-9 on the season with the win and will face No. 9 Florida, the tournament’s second overall seed, Friday at 8 a.m. CT. Mississippi State fell to 15-10 with the loss.

The Bulldogs got the match started by taking the doubles point with a pair of wins on courts one and three. The No. 72 pairing of Madison Harrison and Khrystyna Vozniak defeated LSU’s top pairing of Richardson and Jessica Golovin, ranked No. 32 in the country, by a score of 6-2 on court one and Anastasia Rentouli and Sara Lizariturry defeated Luba Vasilyuk and Ashton Rabalais on court three, 6-1.

Vozniak and Rentouli picked up two more points for Mississippi State in singles competition on courts six and four, respectively, and the Bulldogs led LSU 3-0 before the Tigers’ comeback was set in motion.

Golovin, ranked No 78 in the country, blew past Magda Adaloglou in straight sets for the second time this season, 6-1, 6-3, on court three to put the score at 3-1. Golovin has won five of her last six matches and picked up her team-leading 18th dual singles win this season with the win over Adaloglou.

Vasilyuk followed closely behind with a 6-2, 6-1 takedown of Sara Lizariturry, also for the second time this season, pulling the Tigers to within one point of Mississippi State with two courts remaining. The freshman’s gutsy performance on court five was monumental in propelling the momentum in LSU’s favor despite the frigid temperatures and windy conditions on the outdoor courts.

Senior captain Ryann Foster tied the score at three points apiece with a 6-4, 6-0 victory against Janina Braun on court two, improving to 11-5 this dual season and picking up win No. 71 for her Tiger career.

After dropping her first set, 6-3, Richardson flipped a switch and overpowered Harrison in the second set, 6-2, and carried her momentum into the third set, which she won 6-2 to clinch the match. The three-time SEC Freshman of the Week improved to 27-4 this season and 17-1 in dual singles. Richardson also ran her current win streak to 15-straight matches with the victory and has not lost a singles match since January.

“As soon as I saw the way Eden started the second set, I knew she was going to be alright,” Sell said. “She made a few adjustments like she’s been doing so beautifully all season and I just knew after that second set that she was going to take care of business.”