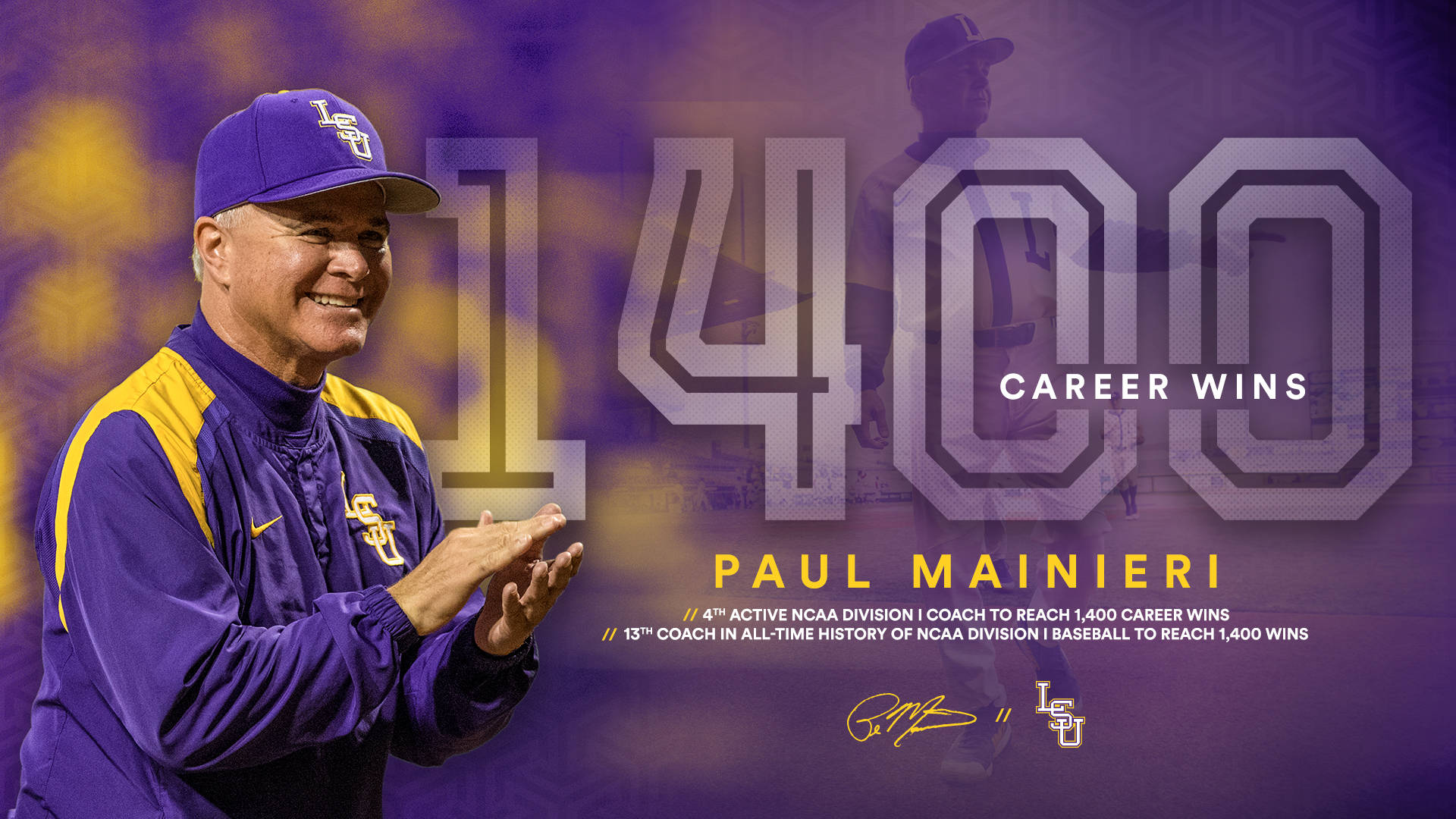 Cabrera’s dinger was the first walk off home run by the Tigers since June 6, 2015, when Chris Sciambra hit a solo blast against UL-Lafayette to open the NCAA Super Regional.

Sunday’s win was the Tigers’ first walk-off victory of any kind since May 7, 2017, when Antoine Duplantis provided a walk-off single in the bottom of the 10th inning to defeat South Carolina.

Sunday’s win also marked head coach Paul Mainieri‘s 1,400th career victory. He is one of only four active Division I baseball coaches who have reached the career milestone and is the 13th coach in the all-time history of Division I baseball to have accumulated 1,400 wins.

With the win, LSU improves to 24-13 overall and 9-6 in Southeastern Conference play while Tennessee drops to 21-17 on the season and 5-10 in league play. LSU is in sole possession of second place in the SEC Western Division, one game behind Arkansas.

The last time the Tigers won a contest after trailing by four runs entering the ninth inning was the infamous “Rally Possum” game against Arkansas on May 7, 2016. The Tigers trailed 9-5 in that game before posting four runs in the bottom of the ninth inning to tie the game and won it in walk-off fashion in the 10th, 10-9.

The Tigers will travel to New Orleans Wednesday for a midweek contest against Tulane. First pitch at Turchin Stadium is slated for a 6:30 p.m. CT start. Fans can listen to the game on the LSU Sports Radio Network.

Junior left-hander Taylor Petersen (1-0) earned the win after entering for the final out of the top of the ninth inning. LSU used a committee of pitchers in the contest. Freshman right-hander Devin Fontenot earned his first career starting nod and fired two innings. The freshman right-hander allowed one run on two hits and struck out four.

The loss was charged to Tennessee reliever Zach Linginfelter (2-4) who did not record an out in the bottom of the ninth inning and was charged wtih two runs on one hit.

Tennessee starter Will Neely was very effective against the Tigers and fired eight innings. The right-hander gave up six runs—three earned—on nine hits, walked one and struck out six.

After leading off the top of the inning with a double to right field, designated hitter Nico Mascia scored on first baseman Pete Derkay’s single up the middle to give Tennessee the 1-0 lead.

The Volunteers tacked on another three runs in the top of the third inning when Mascia belted a three-run home run to right field with two outs, and Tennessee took the 4-0 lead.

Second baseman Austin Bain doubled down the left field line to start the bottom of the fourth inning for the Tigers. He moved to third on a ground ball and scored on a passed ball to cut into the Volunteers’ 4-1 lead.

With two outs in the bottom of the fifth, centerfielder Zach Watson was hit by a pitch, and right fielder Antoine Duplantis doubled to left field to drive home a run. Bain followed with his second hit of the day, a single to left field, bringing in Duplantis, and the Tigers pulled within one as the score was 4-3.

In the top of the seventh, Jay Charleston singled through the right side with one out. The Tennessee second baseman moved to second on a wild pitch and then scored on a ground ball to the pitcher, and Tennessee took the 5-3 lead.

Tennessee added two runs on the top of the eighth inning to make it 7-3. With two outs and Derkey on second after a single and a throwing error, center fielder Brodie Leftridge drove a base hit to left field, which scored Derkey from second. With runners in scoring position, Leftridge scored on a fielding error.

Chris Reid entered to pinch hit and lead off the bottom of the ninth inning for the Tigers. He reached on a fielding error, and a single by left fielder Beau Jordan put runners on the corners. With no outs, Watson reached safely on a fielder’s choice that brought in Reid and Jordan was safe at second when Charleston couldn’t handle the throw from Tennessee shortstop Andrew Lipcius. The Volunteers lifted Neely for Linginfelter, who loaded the bases after hitting Duplantis with a pitch.

Bain then ripped a two-run double to right-center on the first pitch he saw to put the tying run 90 feet away, and Tennessee elected to go to its bullpen for right-hander Andrew Schultz. After taking the first pitch for a ball, Cabrera launched a three-run blast to right field to lift the Tigers past Tennessee and capture the series sweep.

The homer was the fourth of the season for Cabrera, who was drafted last summer by the San Diego Padres, but elected to enroll at LSU.

“It didn’t look like it was going to be in the cards for us today,” Mainieri said. “But, it just goes to show what makes baseball heartbreaking on one side and special on the other side. You can’t run the clock out, there are 27 outs, and that’s what makes baseball so unique.

“Our kids never gave up, and we had some unbelievable at-bats. What a moment at the very end for Daniel Cabrera. This first thing Daniel said to me after the game was, ‘This is why I came to school to have moments like this.’ I thought that was just perfect, because I’m sure that’s something this young man will never forget.”

HOLY @Daniel2cabrera! That ball was DEMOLISHED as LSU completed the sweep with a 9-7 win against Tennessee! #GeauxTigers🐯 pic.twitter.com/4WCs6IoRLJ