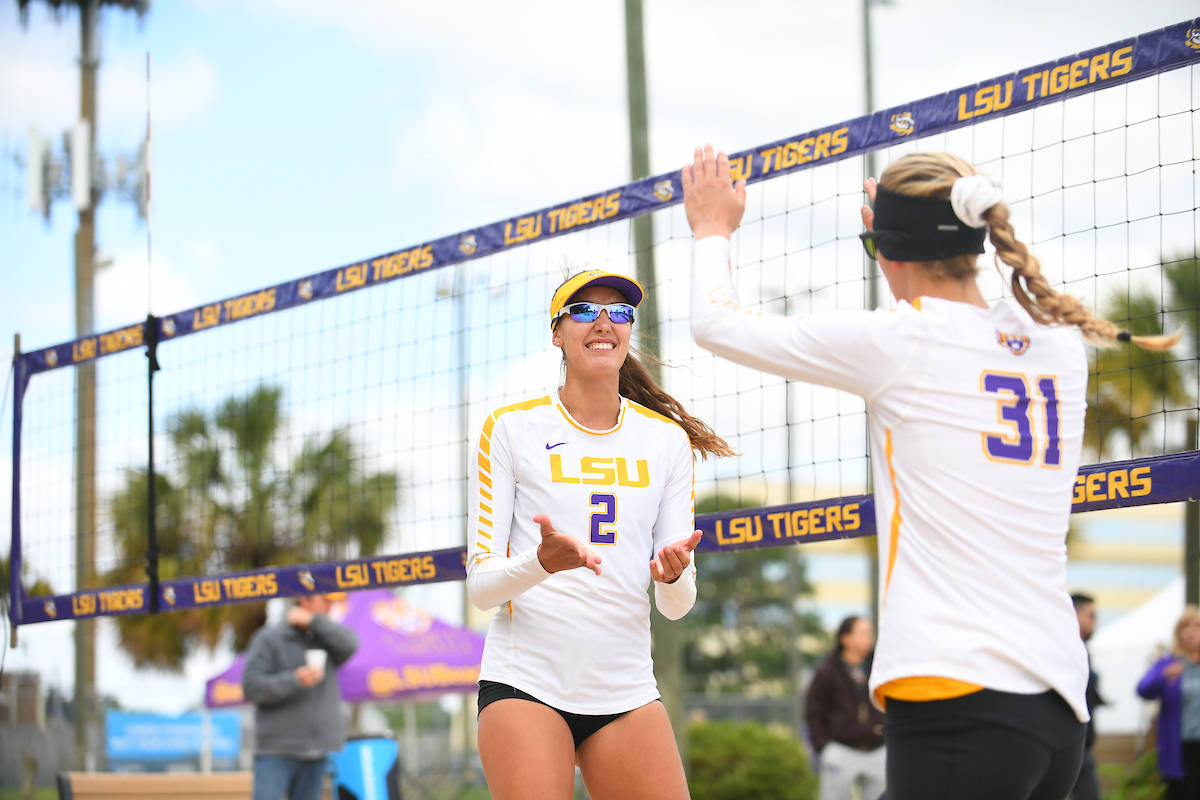 BATON ROUGE –  After the No. 8 LSU beach volleyball team fell to Florida State in the morning, the Tigers closed out with a win against Houston Baptist at the final match at Mango’s Beach Club to close out the season.

“To finish out the weekend with a win on senior day, the last match at Mango’s, it’s a good story,” said coach Russell Brock.

Heading into the match, LSU and Florida State were both riding double digit win-streaks. The Seminoles extended their streak to 11 matches, snapping the Tiger’s 14-match win-streak.

LSU jumped out to an early lead when Megan Davenport and Emmy Allen earned a straight set win on Court 4, 21-17 and 21-16. Riley Young and Maddie Ligon took Court 5 in three sets. After taking the first set, 21-14, the LSU duo dropped the second set, 21-14. In the deciding set, Young and Ligon battled in extra points, earning a 17-15 win and giving the Tigers a 2-0 lead.

LSU suffered straight-set losses on Courts 1-3 as the Seminoles came to back to earn the victory. Haleigh Nelson and Mandi Orellana dropped set two, 21-10, after falling in the first set, 21-17 on Court 2. Olivia Powers and Hunter Domanski suffered back-to-back, 21-15, set losses, as FSU evened the match.

“Any time you play somebody and you can play them again, there is a much better understanding of what it will take to beat them,” said Brock of potentially facing Florida State again next week at the CCSA Tournament.

On Court 1, Claire Coppola and Kristen could not mount a comeback after dropping the first set, 21-13. With the second set tied at 18, FSU gained three consecutive points to defeat the LSU pair.

In the final season match of the regular season and last match at Mango’s Beach Club before LSU moves to its new on-campus facility, the Tigers and Houston Baptist faced each other.

The Court 3 pair of Domanski and Powers finished in straight sets, earning 21-11 and 21-12 victories. Nelson and Orellana took forced a third set on Court 2 when the duo won 21-17 in the second set after falling 21-8 in the first set. In the third set, Nelson and Orellana won, 15-10.