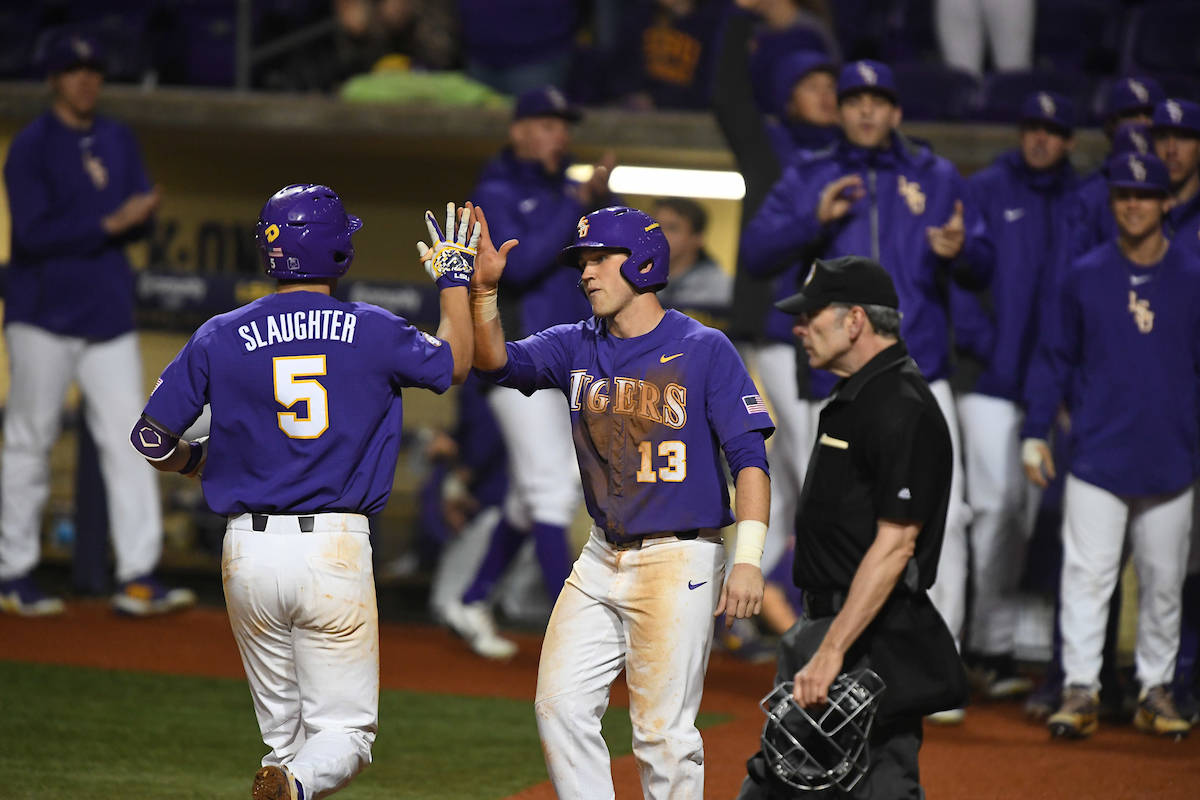 BATON ROUGE, La. — The No. 19 LSU baseball team remained hot and darted out to a 5-0 lead in the first inning, eventually clinching the series against Tennessee with a 14-5 win on a chilly Saturday night in Alex Box Stadium, Skip Bertman Field.

With the win, LSU improved to 23-13 overall and 8-6 in Southeastern Conference play while Tennessee dropped to 21-16 on the season and 5-9 in league play.

The series finale between LSU and Tennessee is slated for a 4 p.m. CT start at The Box. Game 3 will be televised on the SEC Network, and fans can also listen to the game on the LSU Sports Radio Network.

Ma’Khail Hilliard (7-2) was very effective in his six-inning start for the Tigers. The freshman right-hander limited Tennessee to three runs on five hits, walked one and struck out six.

Caleb Gilbert entered for the final nine outs and pitched effectively to earn his first save of the season. The junior right-hander allowed two runs on four hits and struck out six.

“I so was proud of the way our guys played tonight,” said LSU coach Paul Mainieri. “We had a lot of great at-bats, Ma’Khail was awesome again, and Caleb came in and did the job for us out of the bullpen. There’s not much to be critical about – we’ve played two solid ball games to start this weekend series, and now have the chance to finish the job on Sunday.”

After Hilliard worked a flawless first inning, the Tiger bats picked up right where they left off from Friday’s contest. To lead off the inning, left fielder Beau Jordan and center fielder Zach Watson stood on second and third after an error, a bunt single and a balk. Duplantis slapped a RBI single into left field, and second baseman Bain drove in a run with his ground ball to third.

With one out and Duplantis and first baseman Nick Coomes on the corners after a fielder’s choice, designated hitter Daniel Cabrera smoked a single to right field, and Slaughter followed with his first triple of the season to clear the bases and give LSU the 5-0 lead.

The Tigers batted around in the first, and Watson led off the second with a single to left field. The speedy sophomore stole second and moved to third after tagging on a fly out. He scored as LSU jumped out to the 6-0 lead when Bain slapped a single up the middle to score Watson.

In the top of the fifth, Tennessee catcher Nico Mascia sent a solo shot to right field. A walk and a single put Volunteers on first and second with two outs, and third baseman Wyatt Stapp doubled to right center, driving in two runs and cutting LSU’s lead to 6-3.

LSU responded with three runs of its own in the bottom of the fifth. Coomes unleashed his second hit of the day with a double to right-center, and Cabrera legged out an infield single to shortstop to put runners on the corners.

With one out, shortstop Hal Hughes dropped a perfect bunt to score Coomes, and there were runners in scoring position after a fielding error by the catcher. A RBI groundout by Beau Jordan and another Watson base hit made it 9-3 Tigers.

Coomes stood on third after a leadoff single in the bottom of the seventh, a stolen base and a groundout, and Slaughter demolished a ball to left-centerfield, marking his fourth home run of the season and third of the weekend. With Watson and Beau Jordan in scoring position and two outs, Duplantis singled up the middle, bringing in both baserunners. LSU led 13-3 after seven innings.

Slaughter has collected three homers and six RBI in the first two games of the series.

“Jake Slaughter is a guy who has awesome athletic ability,” Mainieri said. “He’s strong, he’s got bat speed, he hits the ball as hard as anybody. He never stops working and loving the game, so when a kid like that experiences success, not only is he happy, but everyone else is happy for him.”

With one out and Tennessee runners on first and second, left fielder Evan Russell hit a RBI single to centerfield and first baseman Pete Derkey grounded out to drive in a second Volunteer run, making it 13-5 Tigers.

Pinch hitter Nick Webre put the exclamation point on the game with the first home run of his career, a two-out solo shot over the Diamond Deck in right field, to finalize the score at 14-5.