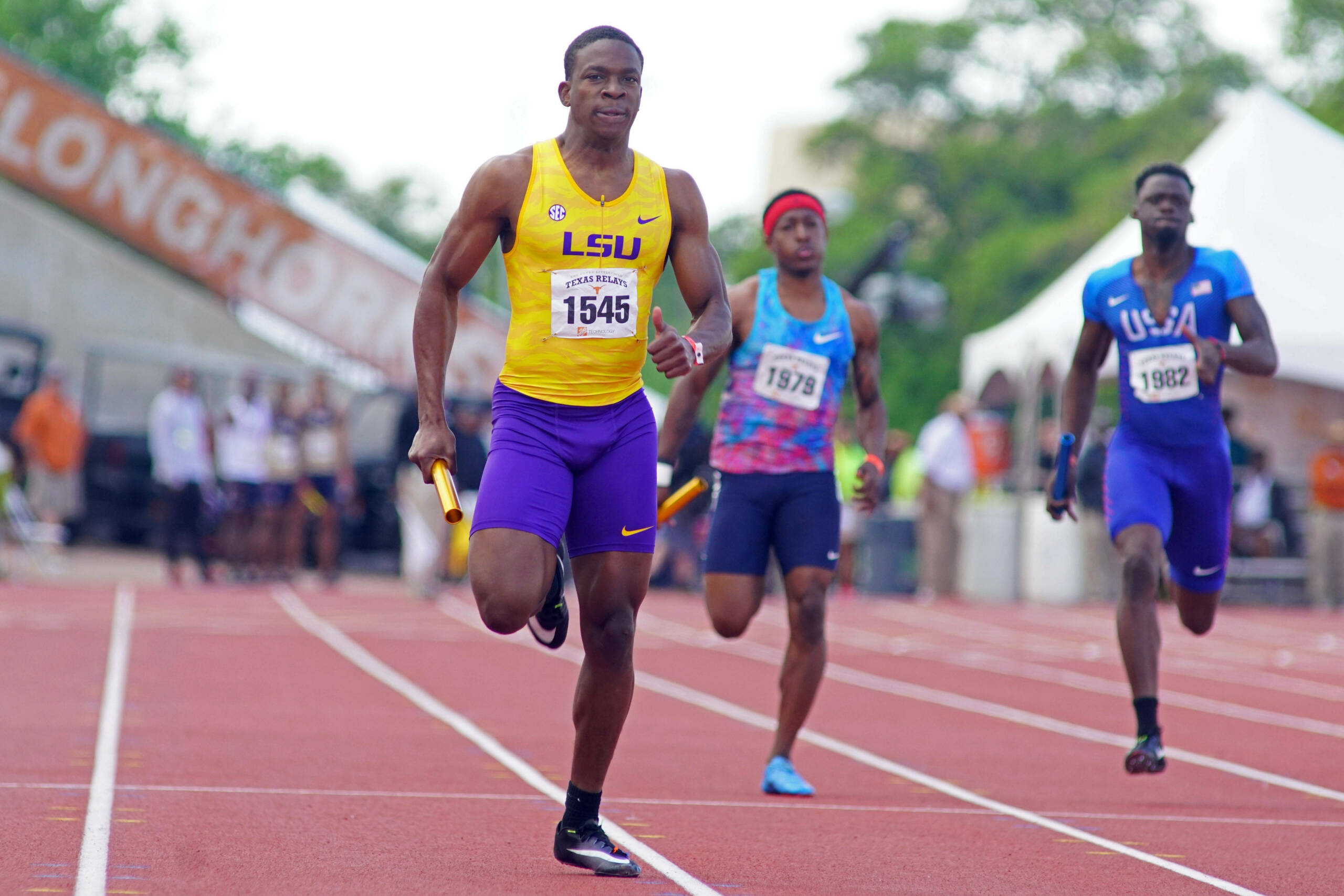 Coral Gables, Fla. – The LSU track and field team combined to win 13 total events on Saturday at the 2018 Hurricane Collegiate Invitational at Cobb Stadium. Of the 13 events, 11 were individual titles and the other two wins came via the women’s and men’s 4×100 meter relays.

LSU swept additional meet titles in the 100 and 200 meter dash as well as the sprint hurdles. In the 100 meter dash, a total of four sprinters wearing the Purple and Gold came away with event titles. In the women’s race, Cassondra Hall and Rachel Misher sprinted to the line evenly with matching times of 11.21 to claim the victory; the time of 11.21 ranks 10th nationally and was a personal best for both student-athletes. On the men’s side, Renard Howell and Correion Mosby split the title with personal-best times of 10.34 apiece.

Ersula Farrow squared off with the No. 1 ranked 800 meter runner in the nation, Kayla Johnson of Miami. Farrow went stride for stride with Johnson the first 750 meters of the race before the Miami runner was able to pull away in the final stretch. Farrow clocked a personal-best readout of 2:03.66 to earn silver and register the second-fastest time in the NCAA. Senior Jack Wilkes came away as the victor in the men’s 800 meter run with a time of 1:50.85. Hollie Parker won her event, the 1,500 meter run, with a time of 4:24.92.

The Tigers showed off their impressive speed in the 200 meter dash sweeping the top three spots in the women’s race. Kortnei Johnson (22.61), Mikiah Brisco (22.83) and Aleia Hobbs (22.93) dashed to a one-two-three finish in the event. Johnson’s time of 22.61 is the fifth fastest in the nation this year. For the men, Akanni Hislop clocked a personal-best readout of 20.74 to claim his gold and Jahnoy Thompson trailed him closely with a 20.77 for silver.

The Tigers had three field athletes come away with gold on Saturday. Freshman hammer thrower Jake Norris won his fourth title of the season in the event with a heave of 225-11 (68.86 meters). In the men’s long jump, JuVaughn Blake leaped out to a personal-best marking of 24-11.25 (7.60 meters) for his title, and Noel Baker won her first collegiate event as a javelin thrower with a mark of 146-01 (44.53m).

In the sprint hurdles, Tonea Marshall and Damion Thomas were the top collegiate finishers. Thomas won his fourth 110 meter hurdle event of the season with a time of 13.78 and Marshall registered a personal best of 13.09 seconds to claim the top collegiate spot and finish second overall. Marshall’s time ranks 12th nationally. Arthur Price placed third in the 110 meter hurdles with a 14.41.

The women’s and men’s 4×100 meter relays were victorious to get the track events started. The women’s foursome of Brisco, Johnson, Misher and Hobbs went 42.53 to remain undefeated this season, while the men’s squad of Kary Vincent Jr., Howell, Mosby and Jaron Flournoy won their race with a time of 39.51.

The Tigers are scheduled to host the Alumni Gold meet next Saturday (April 21) at the Bernie Moore Track and Field Stadium.