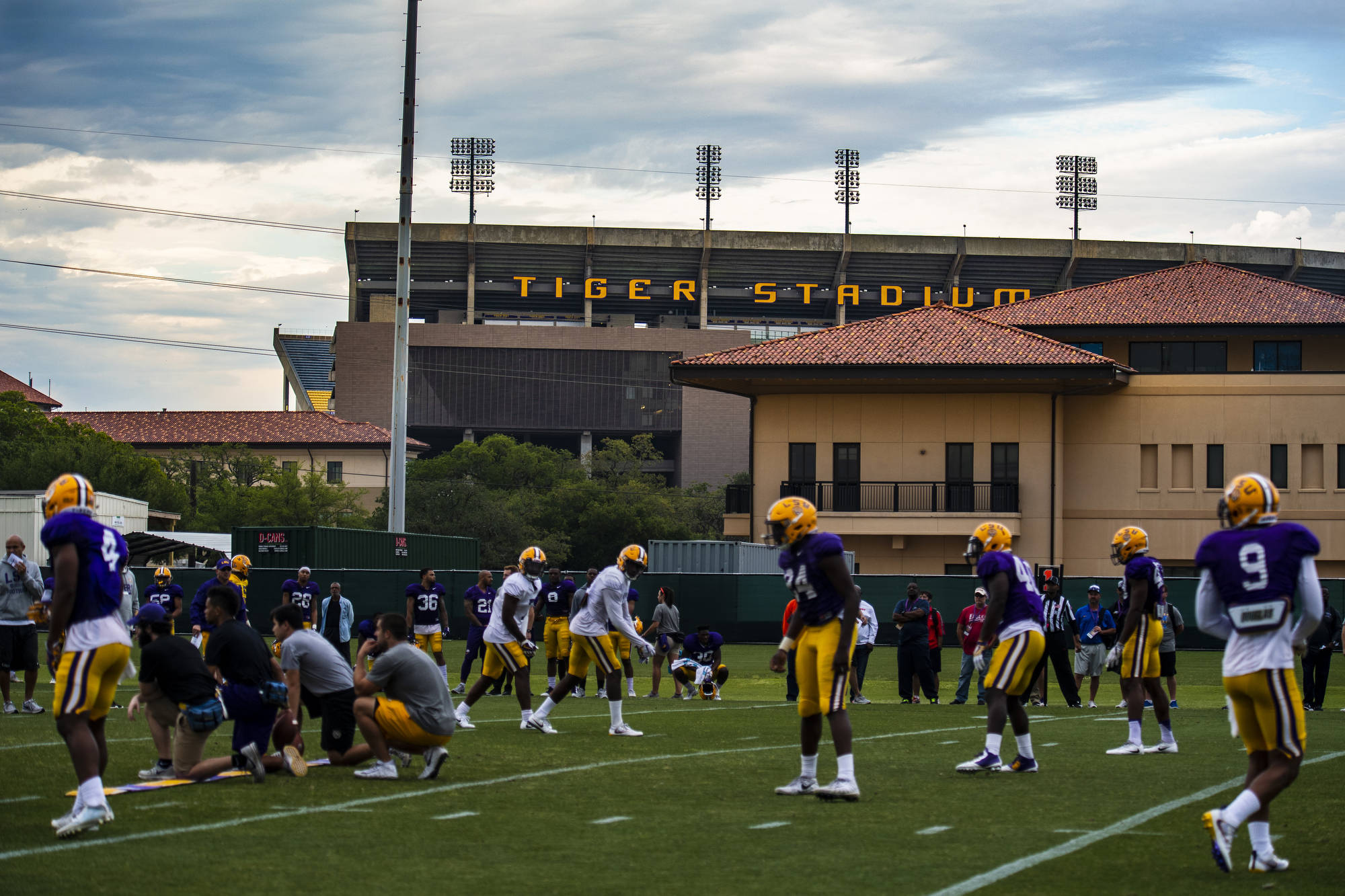 BATON ROUGE – Calling it the “best overall scrimmage” since he’s been a coach at LSU, Ed Orgeron and the Tigers wrapped up their fourth week of spring practice with a two-hour scrimmage here indoors at the Charles McClendon Practice Facility.

Saturday’s workout marked the fourth full-scale scrimmage of the spring for the Tigers and it capped another three practice week for LSU. The Tigers close out their second spring under Orgeron next Saturday as LSU plays the National L Club Spring Game in Tiger Stadium. Kickoff for the contest is set for 5 p.m. and admission to the game is free.

“I want to complement our team and our coaching staff,” Orgeron said. “It was a very spirited practice, very competitive. Overall our best scrimmage since I have been here as a coach. Both the offense and defense executed very well.

“Give credit to our team. I challenged them on leadership today. Guys stood out on both sides of the football. Our coaches were very well prepared.”

The Tigers opened the workout focusing on third-and-six and third-and-seven plus yards. Orgeron said the offense won the segment of the scrimmage and that “they threw the ball very well, and we protected the quarterback really well.”

The second portion of the scrimmage was a 30-play period that, according to Orgeron, saw the No. 1 offense score a touchdown on the No. 1 defense for the first time this spring, doing it twice on Saturday.

The scrimmage wrapped up with periods dedicated to red zone, goal line and the two-minute drill.

“When we got into the red zone, the defense stiffened up,” Orgeron said. “They (defense) did a very good job there. We had a very spirited goal line (period) and both sides of the football played very well there.”

Offensively, running back Clyde Edwards-Helaire has his best outing of the spring with 109 yards and five touchdowns in 18 carries. Orgeron said most of Edwards-Helaire’s touchdowns came during the goal line period. Nick Brossette rushed for 32 yards on 16 carries.

Orgeron said quarterback Lowell Narcisse had his best day of the spring, connecting on 7-of-10 passes for 143 yards. Myles Brennan hit on 10-of-20 passes for 98 yards, Justin McMillan was 5-of-16 for 62 yards and transfer Andre Sale was 2-of-3 for 20 yards.

“(Lowell) played several snaps with the first team and he did very well,” Orgeron said. “Lowell stood out today. He made a lot of good throws, a lot of good plays. He had some scrambles and some big passes. He has improved every day.

Orgeron credited the performance by both the offense and defense in today’s scrimmage to the preparation for the workout that started on Thursday.

“Also, (we had) a great kickoff game. We started the scrimmage with kickoff coverage and we wanted to see who is going to go down and hit somebody. Micah Baskerville had a big hit that excited the whole team. I thought overall today was the best scrimmage on both sides of the football.”

The Tigers practice on Tuesday and Thursday next week followed by the spring game on Saturday evening.