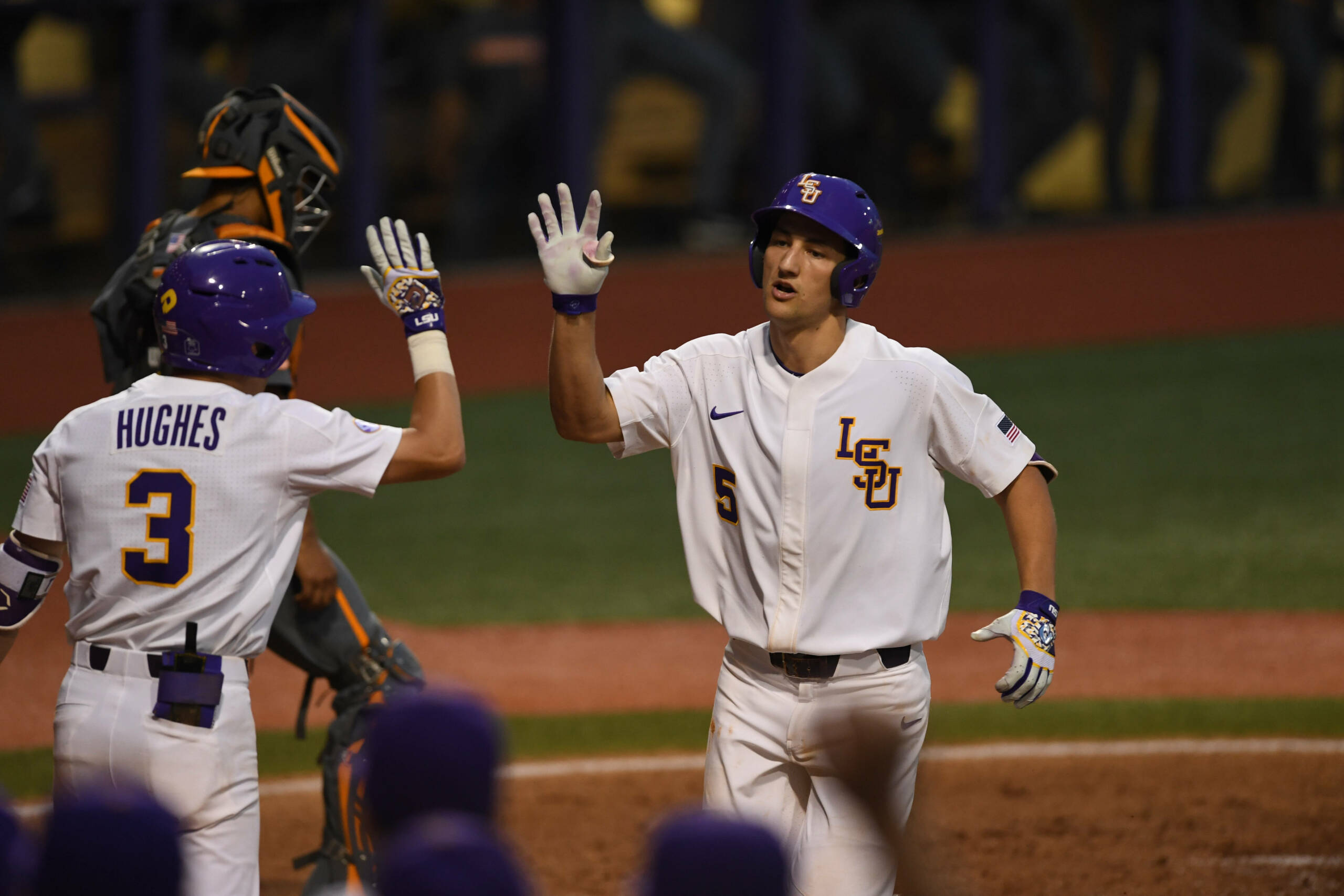 Friday’s game marked the first time that LSU launched four home runs in an SEC contest since the Tigers accomplished the feat on May 16, 2013, versus Ole Miss at The Box.

Slaughter now has four home runs this season, surpassing his total of three in all of last season.

Hess (6-3) threw a terrific ballgame, not allowing a hit until the fourth inning. He worked seven innings, striking out seven and surrendering just three hits and one run.

Left-hander Garrett Crochet (2-5) suffered the loss for Tennessee. He gave up eight runs on 10 hits in two innings of work.

“We came out with a lot of fire tonight,” said LSU coach Paul Mainieri. “Tennessee had a freshman left-hander with a very good fastball, and I think our players were ready for that and really geared up. We had so many great at-bats and ended up hitting four home runs. I was real happy for Jake Slaughter to have a big night. The whole lineup played great, and it was good victory and a good way to start the weekend series.”

Leading off the game, leftfielder Beau Jordan launched the first pitch he saw, a fastball, into the left field bleachers to get LSU on the board early.

B1: Goodbye baseball!!! @beaujordan24 launches the first pitch he sees to get the Tigers on the board early!

After centerfielder Zach Watson reached base safely, rightfielder Antoine Duplantis extended his hit streak to seven games with a single. Second baseman Austin Bain then drove a single, scoring Watson and putting runners on the corners.

Designated hitter Daniel Cabrera grounded into a double play, but that allowed Duplantis to score, giving LSU the 3-0 lead over the Volunteers after one inning.

Like Jordan in the first inning, Slaughter led the second off with a deep 428-foot home run to center field, giving the Tigers a 4-0 lead. With runners on second and third, Duplantis grounded out to second base, but in the process, Jordan was able to come home from third.

Bain then went with a pitch on the outside, driving an opposite-field single and pushing home Watson to give LSU a 6-0 lead.

In the third inning, catcher Hunter Feduccia led the Tigers off for the third consecutive inning with a home run. The Tigers went back-to-back in the inning when Slaughter blasted his second home run of the night.

B3: Déjà vu!!!@hunter_feduccia leads the third off with another home run!

Jake Slaughter follows that with his second homer of the night!

While Wallace warms up, check out Jake Slaughter’s second dinger of the night!

Tennessee got on the board in the fourth inning when Nico Mascia delivered an RBI single.

The score remained 8-1 until LSU struck for one final run in the eighth. After a two-out triple from Duplantis, Bain drove him home with a single. It was Bain’s fourth hit of the evening and third RBI, both career highs.