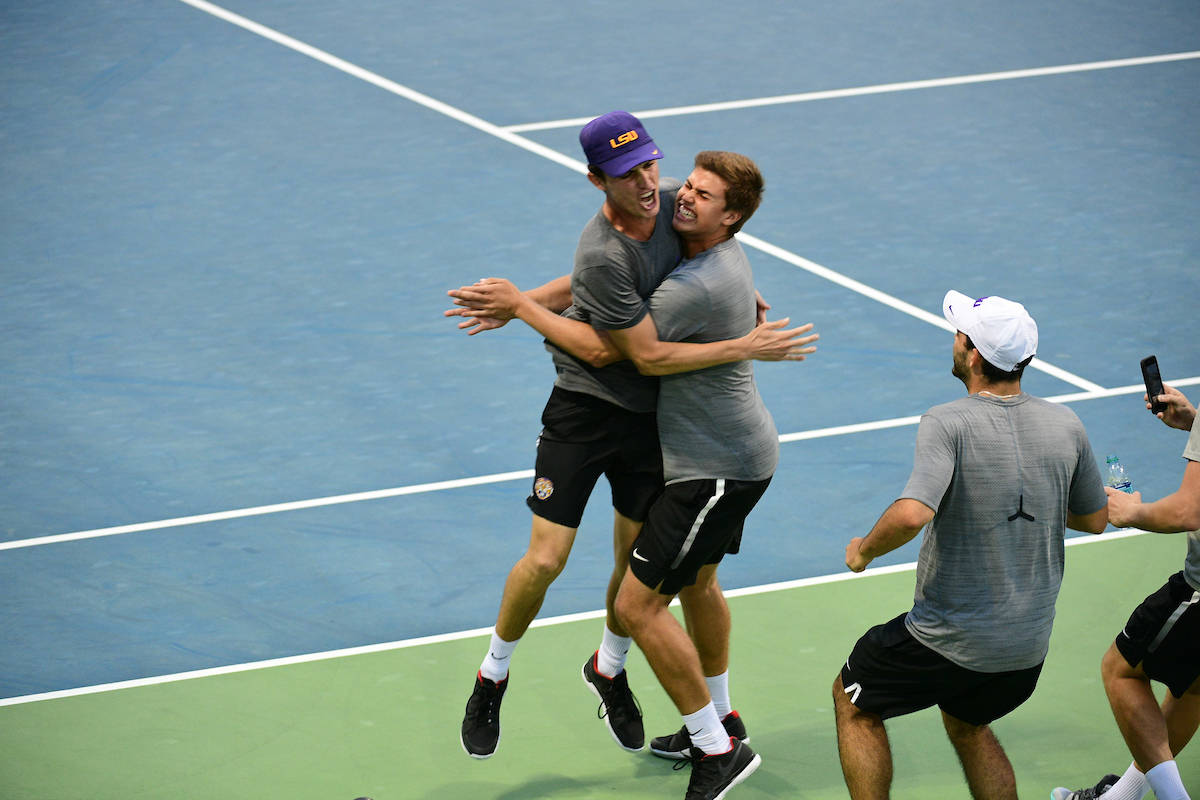 BATON ROUGE— With the score tied at three, Nikola Samardzic bounced back after a first set deficit and snatched the next two sets from Ollie Thestrup on court three to clinch the match and propel LSU to a 4-3 victory over Auburn, Friday evening at the LSU Tennis Complex.

With the win, LSU improves to 9-14 on the year and 2-9 in Southeastern Conference action while Auburn dropped to 12-16 overall and 1-9 in league play.

Co-Head Coach Andy Brandi on the Match
“In doubles, we just didn’t start right,” co-head coach Andy Brandi said. “We just gave them too much momentum and put our backs against the wall. We were fortunate enough to play through and win the doubles point. That was the difference. Courts four, five and six went down fast, but Rafael (Wagner) turned it around in the first set. Shane (Monroe) was solid the whole time, and the star was Nik (Samardzic). This is the first time that Nik really has played to his potential the whole season. He played fantastically in the second set to win it, and he was very solid in the third set. This is a very big win for us.”

Doubles Point
Auburn’s Carles Sarrio and Matteo De Vincentis defeated Nikola Samardzic and Julian Saborio, 7-5, on court two to begin doubles play. After falling behind early on court three, Stewart Block and Shane Monroe edged out Diego Chavarria and Brandon Laubser, 7-6(8), which left the doubles point decision to court one. Sophomore duo Rafael Wagner and Agie Moreno forced the match against Ollie Thestrup and Tad Maclean into a tiebreaker and walked away victorious, 7-6 (4), giving the Bayou Bengals the 1-0 lead into singles play.

On court five, Moreno rebounded after falling in the first set to force the match into a deciding set. However, the sophomore was unable to hold on, and Tad Mclean took the final set to knot the match, 3-3.

Next Up
LSU will host Mississippi State at noon Sunday in the LSU Tennis Complex to wrap up SEC action. LSU will conclude the regular season on Friday, April 20, with a home match against New Orleans at 5 p.m. CT.