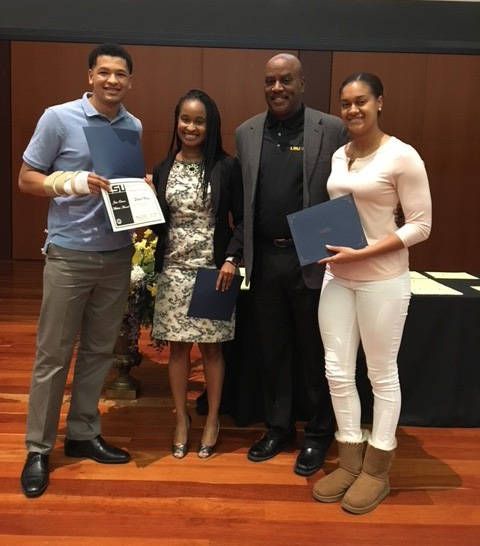 Mays, who finished his second year with the LSU Basketball team, and Stokes, who has also earned two letters with the LSU Volleyball program, were named the recipients of the Jesse Owens Student Award for the highest GPA by undergraduate student-athletes.

The award is named in honor of the internationally known track athlete and trailblazer Jesse Owens, who attended the Olympics in Berlin in 1936 and won multiple gold medals during Adolf Hitler’s reign in Germany.

Mays, who is majoring in biology, was named a second-team COSIDA Academic All-America and Stokes, an English major, was a member of the SEC Academic Honor Roll. Mays is from Baton Rouge, while Stokes came to LSU from Long Beach, California.

The awards were presented to the pair by Dr. LaKeitha Poole, Director, Sports Psychology and Counseling Services and the Chair of the 2018 Black Scholars Award Program selection subcomittee; and, Dr. Dereck Rovaris, Vice Provost of the LSU Office of Diversity.