Tigers Meet Vols This Weekend at The Box 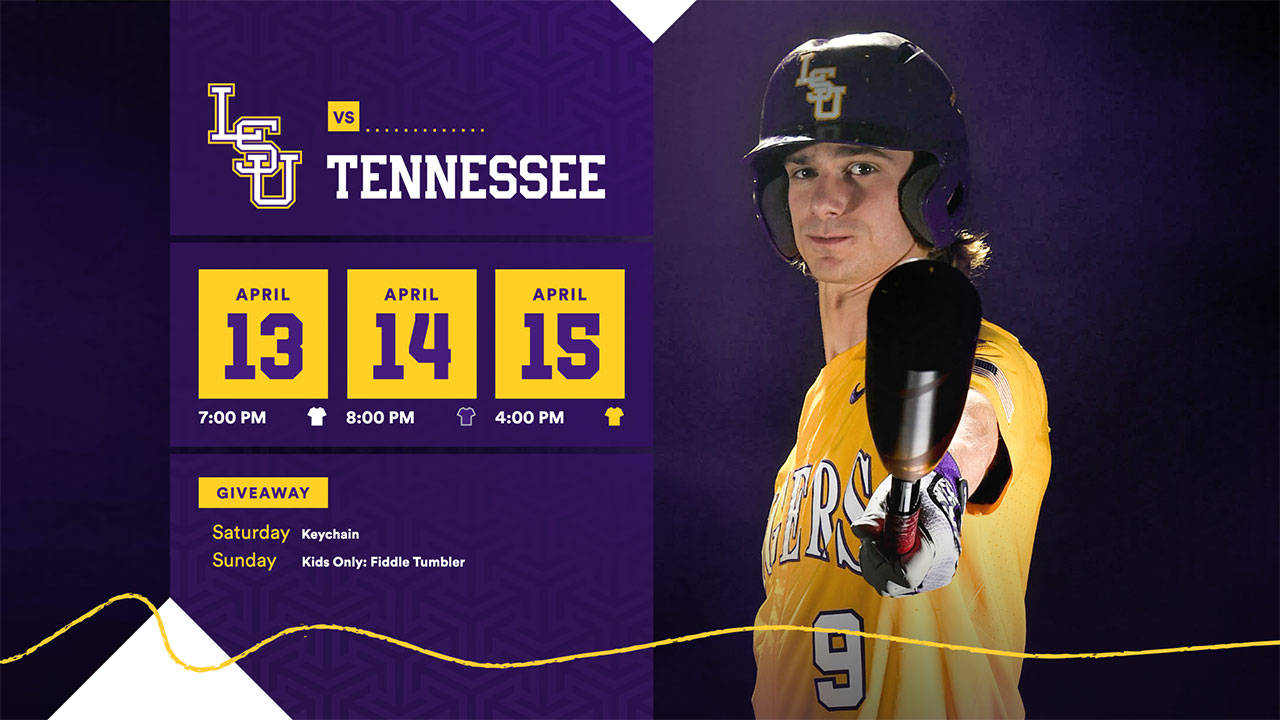 RANKINGS
LSU – No.19 by Baseball America; No. 23 by Collegiate Baseball
UT – unranked

ONLINE
All three games may be viewed on SEC Network +, accessible at WatchESPN.com and the Watch ESPN app

TV
Sunday’s game will be televised by the SEC Network

QUOTING PAUL MAINIERI
“Tennessee has a very talented team, and they’re playing well entering this weekend. They beat Florida, the No. 1 team in the country, once last week, and could have won twice; I think they were one out away from winning another game that Florida eventually won in extra innings. I’ve watched their games – they’ve got good arms, good athletes all over the place. We’ve got a big weekend ahead of us, so we’ve got to be ready to meet the challenge. Despite the adversity we’ve faced this season, we’re still in the thick of things in the SEC race.”

ABOUT THE TIGERS
• The Tigers are No. 19 in this week’s Baseball America poll, marking the 123rd consecutive week the Tigers have appeared in a Top 25 poll … LSU has been ranked every week since the beginning of the 2012 season.
• LSU is 6-6 in the SEC after last week’s series at Texas A&M, and the Tigers are two games out of first place in the Western Division behind Arkansas.
• LSU enters this weekend’s series No. 5 in the SEC in team batting average, as the Tigers are hitting .289 with 66 doubles, 10 triples, 25 homers and 39 steals in 47 attempts. LSU’s hitters have the fewest number of strikeouts in the league (197). The Tigers are No. 10 in the league in team ERA with a 3.69 mark.
• Sophomore right-hander Zack Hess is sixth in the SEC in strikeouts with 60, and he is No. 8 in the league with a .203 opponent batting average … he pitched brilliantly in the Tigers’ win at Texas A&M last Thursday, firing eight shutout innings and limiting the Aggies to four hits with three walks and five strikeouts.
• Freshman right-hander Ma’Khail Hilliard leads the SEC in ERA (1.34), and he is No. 4 in the league in opponent batting average (.194) … freshman right-hander Devin Fontenot and sophomore left-hander Nick Bush are seventh in the SEC in appearances with 15 apiece.
• Junior rightfielder Antoine Duplantis is batting .395 (15-for-38) in the Tigers’ last 10 games with three doubles, one triple, six RBI, three runs and three stolen bases … he is hitting .474 (9-for-19) in the last five games with two doubles, two RBI and one run.
• The LSU bullpen’s consecutive scoreless innings streak ended at 29.2 innings last Thursday night when Texas A&M scored one run to avoid a shutout in the Tigers’ 4-1 win … the scoreless inning streak spanned from the March 21 game versus Tulane until the Texas A&M game on April 5.
• LSU coach Paul Mainieri has 1,397 wins in 36 season as a collegiate head coach, and he is seeking to become just the fourth active NCAA Division I coach to reach 1,400 career wins … Mainieri is also seeking to become just the 13th coach in the all-time history of NCAA Division I baseball to reach 1,400 wins.

ABOUT THE VOLUNTEERS
• Tennessee is No. 14 in the SEC in team batting average, as the Vols are hitting .263 with 62 doubles, eight triples, 23 homers and 34 steals in 42 attempts. The Vols are No. 12 in the SEC in team ERA with a 4.12 mark.
• The Volunteers’ leading hitter is senior catcher Benito Santiago, who is batting .315 with 13 doubles, one triple, five homers, 23 RBI and 22 runs.
• Sophomore outfielder Dustin Ammons is hitting .305 with four doubles, two triples, three homers and 17 RBI; sophomore infielder Andre Lipcius is batting .299 with nine doubles, three homers and 28 RBI; and sophomore outfielder Jay Charleston is hitting .288 with four doubles, three homers and 18 RBI.
• Tennessee sophomore right-hander Garrett Stallings leads the SEC in innings pitched (54.2), and he is second in the league in complete games with two. Tennessee junior right-hander Will Neely is the SEC leader in complete games with three.