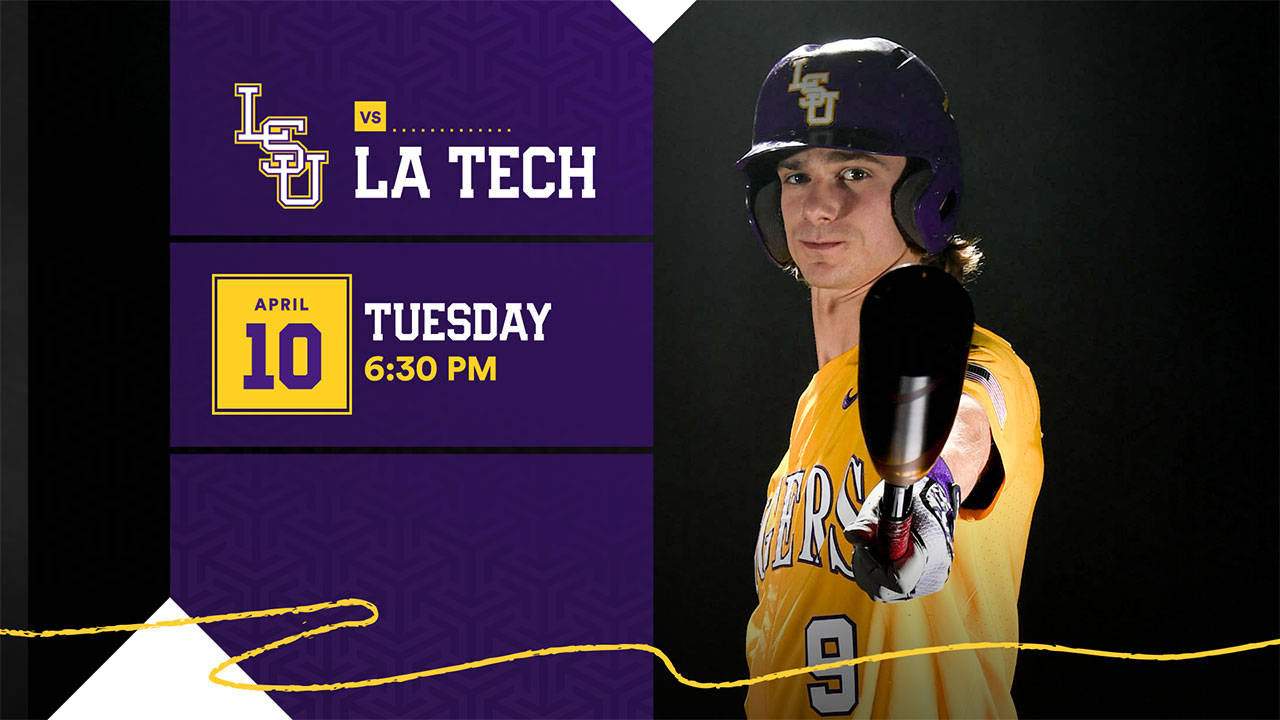 ONLINE
• The game may be viewed on SEC Network +, accessible at WatchESPN.com and the Watch ESPN app

SERIES RECORD
LSU leads the overall series, which began in 1902, 41-18. Tuesday’s game will mark just the second meeting between the schools in the last 20 seasons. LSU and Louisiana Tech last met on March 8, 2016, when the Tigers posted a 6-3 win over the Bulldogs in Alex Box Stadium, Skip Bertman field. That 2016 contest marked the first meeting between LSU and Louisiana Tech since March 10, 1998, when the Tigers posted an 8-1 win over the Bulldogs in the original Alex Box Stadium.

QUOTING PAUL MAINIERI
“We’ve sustained some significant injuries this season, but we’re just going to keep fighting through it. This is a big week for us with four home games against Louisiana Tech Tuesday and Tennessee this weekend. Louisiana Tech is playing great, so they’re going to come down here with a lot of confidence. They pitch really well with a 2.33 team ERA, so we’ll face a tremendous challenge against them. We still right there with all of our goals in front of us, but we know we have to play better. We have to keep battling, and there’s no use feeling sorry for ourselves. We’ve got 23 big ball games left in the regular season, so we’ve just got to grit our teeth and bear it, because it won’t get any easier.”

ABOUT THE TIGERS
• The Tigers are No. 19 in this week’s Baseball America poll, marking the 123rd consecutive week the Tigers have appeared in a Top 25 poll … LSU has been ranked every week since the beginning of the 2012 season.
• LSU is 6-6 in the SEC after last week’s series at Texas A&M, and the Tigers are two games out of first place in the Western Division behind Arkansas.
• The LSU bullpen’s consecutive scoreless innings streak ended at 29.2 innings on Thursday night when Texas A&M scored one run to avoid a shutout in the Tigers’ 4-1 win … the scoreless inning streak spanned from the March 21 game versus Tulane until the Texas A&M game on April 5.
• Junior rightfielder Antoine Duplantis enjoyed a productive week, batting .500 (8-for-16) in four games with three doubles, four RBI and two runs .. Duplantis hit .455 (5-for-11) in the Texas A&M series with two doubles, two RBI and two runs.
• Freshman right-hander AJ Labas, LSU’s starting pitcher versus Louisiana Tech, improved to 3-1 on the year last Tuesday when he defeated Nicholls State … Labas limited the Colonels to just one run on five hits in five innings with two strikeouts.
• Freshman right-hander Ma’Khail Hilliard leads the SEC in ERA (1.34), and he is No. 4 in the league in opponent batting average (.194) … freshman right-hander Devin Fontenot is fourth in the SEC in appearances with 15.
• LSU coach Paul Mainieri has 1,396 wins in 36 season as a collegiate head coach, and he is seeking to become just the fourth active NCAA Division I coach to reach 1,400 career wins … Mainieri is also seeking to become just the 13th coach in the all-time history of NCAA Division I baseball to reach 1,400 wins.

ABOUT THE BULLDOGS
• Louisiana Tech is in a first-place tie in the Conference USA standings with a 9-3 league mark. The Bulldogs are tied with Florida Atlantic, and they’re one-half game ahead of Southern Mississippi.
• Louisiana Tech is hitting .277 as a team with 50 doubles, 13 triples, 27 homers and 41 steals in 65 attempts. The Bulldogs have a 2.33 team ERA, and their pitchers have limited opponents to a .228 batting average.
• The Bulldogs’ leading hitter is sophomore infielder Hunter Wells, who is batting .345 (49-for-142) with five doubles, two triples, two homers, 16 RBI and 27 runs.
• Senior infielder Dalton Skelton is hitting .328 with six doubles, five triples, four homers and 18 RBI; junior outfielder Mason Mallard is batting .322 with seven doubles, two triples, five homers and 21 RBI; and junior infielder Tanner Huddleston is hitting .290 with seven doubles, one triple, five homers and 28 RBI.